This month, Revue sat down with Ed Collazo of City Built Brewing to talk about the recently opened brewery’s clinical approach to beer and a 101 course on Puerto Rican food, including some choice words about taco styles. In short: two corn tortillas are one corn tortilla too much. Food fight?

I’ve heard you’re new to the restaurant/brewpub scene. What brought you to the industry?

I was a homebrewer, to start. My first batch was made with my partner here, Dave (Petroelje). But I was always a student of craft beer. I’d trade craft beers with people from all over the country. And as an adviser, I enjoyed the conversations I’d have with business owners. I appreciated the culture that these different businesses created around their staff. … I started to look for businesses to buy. Luckily, my now-partner Dave was also looking to start a company. The stars aligned for us.

As far as Grand Rapids beer goes, the bar has been set pretty high. So don’t take this as a slight when I say that I was pleasantly surprised by how solid yours are.

Thank you, no, I get it. We’re new. There’s a lot of great beer to choose from in town, and from the start — this might sound a little cheesy — but we just tried to be honest. A lot of these beers aren’t anything groundbreaking, they’re mostly recipes that Dave’s been making forever, and now we get to see them made on a much larger, more professional level. 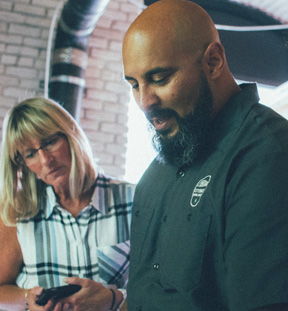 And what about the food?

Same with the food. These are the dishes that we’ve always been eating with our beer. My wife learned how to make Puerto Rican food because it was fascinating to her. She has a culinary background, so she wanted to master it, see how it worked. But we didn’t decide to be a Puerto Rican restaurant and craft brewery because it was inventive — it’s just what we’ve always done!

And City Built is certainly not the first Puerto Rican spot in town, but it might be the most widely recognized one at this point.

Yes, there are Puerto Rican restaurants around town, but they’re not necessarily places where most people would want to go. Consequently, certain people look at our menu and think, ‘Sheesh, that’s expensive,’ especially for a cuisine that is made up of a lot of rice and beans. But we’re downtown! We gotta pay our rent, right?

Ultimately, the goal was to find a spot near town that we could introduce the town to our culture and share that food with them. And it’s not authentic! Puerto Ricans don’t even eat tacos, much less make them with two corn tortillas. But, West Michiganders love their tacos, man. So we put our flavor on a shell and called it good. Only, we use one shell, because we feel that two masks the flavor.

If you were to explain Puerto Rican food to someone who wasn’t familiar with it, how would you sell them?

Puerto Rican food is flavorful, not spicy. It’s comfort food. The base ingredient for pretty much all the food is called sofrito, which is a mixture of cilantro and garlic, oil, green pepper, onion, cilantro. It’s also peasant food. I was talking to a Puerto Rican friend the other day who told me a story — he’d been reminiscing with his mom about food, like, ‘Why don’t we eat this anymore?’ And she said, ‘We ate that because we were poor!’

You know, so often we get together as a family, laugh and tell stories around the simplest things like rice and beans, pastelillos, tostones, it doesn’t need to be much. And for us, at the end of it all, it’s food that makes you say, ‘Hey, get me another beer!’

Last question: You’re still new, but anything on the horizon that we should look out for?

We have some exciting ideas to change up the menu a little after ArtPrize. I’d like to do a Caribbean barbecue style meat plate — smoked meats: brisket, chicken, pork and maybe some sausage, too. We’re already making sausage in-house, but I’d like to round it out with a full Caribbean barbecue, I think.

That would make this place smell great, too.

Well, if you go in our bathrooms, you’ll get an idea. It smells like our pork, but not on purpose! We didn’t plan it that way, but it’s hooked up to the same heating and cooling as the kitchen and that’s why. At first, I was like, ‘Why would the engineers do that?’ But it’s worked out. It’s its own way of marketing.

Tweet
Published in Dining
More in this category: « From East to Westside: A visit to Ando Asian Kitchen & Bar Sweet vs. Savory: Where to satisfy your need for pie »
Login to post comments
back to top