There’s a new French restaurant in the heart of Grand Rapids and frankly, it’s about time. Most western cooking dances around — if not completely bows in supplication to — classic French cookery and technique, but it is understandable, however, that a region so laden with Dutch heritage could dodge a brasserie for so long. The French and the Dutch go together like red wine and Heineken. The slow-moving, languorous production that is a French dinner rarely agrees with a country so focused on flipping tables and fried fast food.

Wherever your European allegiances lie (and I think I’ve revealed mine), New Hotel Mertens, led by Anthony Tangorra, has designed a brasserie in the hotel lobby of, well, the former New Hotel Mertens.

The historic hotel, which opened in 1914 at the very same address, enjoyed a healthy run of success until the 1960s, when it shuttered after the downtown sector of Grand Rapids began to decline. Later, the building was purchased and renovated by Rockford Construction, playing the host to various offices until the restaurant moved in.

And what a beautiful use of space Mertens is. Mosaic-tile flooring is used throughout, and the columns remain only partially finished so as to reveal the “artwork” left on the concrete during the building’s darker days. The restaurant is a casual space, open for breakfast, lunch and dinner, with a small case of patisseries and a gorgeous antique espresso machine. God only knows what designs Tangorra and company have planned for their rooftop expansion, slated to begin as early as this year.

But no matter. There’s enough food and drink on the menu to keep you occupied until then. Start with a Génépey and Tonic — a Swiss G&T, more or less — popular in the Alps where skiers often tuck them away after a session on the slopes. The cocktail menu is stuffed full of classic drinks resurrected from the original 1914 menu, while the wine list ranges from a humble house Bordeaux to a 2014 Mouton-Rothschild. There’s even a very drinkable selection of Michigan wines, with rotating two-ounce pours to accompany different courses.

Personally, I wanted to eat my way through the entire board. The dinner menu must be what St. Peter orders for lunch — or it’s as close as I’m going to get to heaven, anyway. Bless them, there are four different kinds of fat served in the hors d’oeuvres section,, between the pâté de campagne, rillettes, seared foie gras and roasted bone marrow. Plus, the broth the mussels bathe in deserves to be sold by the glass.

The mains are quite stark in their simplicity. What the French can do with a cut of steak, a pat of butter and a potato is beyond magical. The difficulty New Hotel had to overcome, I imagine, was the carte blanche to work with initially. Within a country spilling over with regional specialties, what makes the cut? Iconic dishes like omelettes aux fines herbes, quiche Lorraine, a nice flat-iron steak frites and seared salmon are good introductions unto the more “unpronounceables” like choucroute.

I had the coq au vin. It’s a peasant dish, traditionally: chicken, mushrooms, onion, wine. If you’ve got a bottle of red at home, the whole deal probably runs $5 a serving. This one was $19.50 and I’d have happily paid twice that. The chicken was superlative. The skin was brown and crisp, and the meat itself surrendered from the bone when I reached for my fork. The red wine sauce was thick enough to drag along a potato, with a hint of sweetness and roast garlic. Unbelievable.

My mussels, foie gras and coq au vin were comprised of maybe a dozen ingredients, total. It was philosophy on white china, both simple and complex; humble, yet luxurious. But in between the room itself, the white tablecloth service and the attention to detail, dinner at New Hotel is an event more than it is simply food. I believe we’re the only species to ever offer hospitality. The French have mastered it, and New Hotel Mertens is well on the way to securing its place downtown. Again. 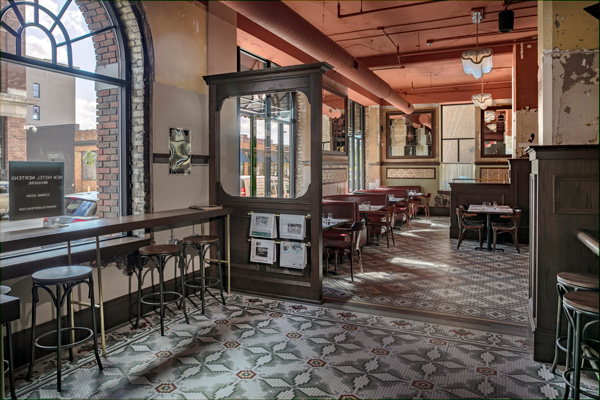 Tweet
Published in Dining
More in this category: « New Year, New You: It’s time to eat some salad To Hell and Back: Scorching hot dishes in West Michigan »
Login to post comments
back to top