Above: Sonder Eatery Below: Irie Kitchen. Above: photo by Shawn Gustaf Below: Photo by Stacy from Pop Kitchen

Jell-O salads, 44-oz. drinks, Wish Bone Italian dressing, John Cheever — these seemingly disparate items conjure up nothing if not our preconceived image of the suburbs, in all its milquetoast glory.

But those are the suburbs of the past! Now, every little town has its own brewery. And in West Michigan, those breweries are hauling some good (excellent, even) eats out to the ’burbs with them. As downtown real estate gets pricier and tighter, look for more options to pop up in towns like Hudsonville — a dry town as recently as 2007 — or in Kentwood, which may have one of the more diverse populations in the greater Grand Rapids area.

These restaurants are not your parents’ drive-ins. Many of these spots are increasingly representative of their communities as they become more diverse. And what a relief! Celebrate these days when you can break up school shopping with curried goat or Korean BBQ instead of something out of the The Joy of Cooking.

Emonae requires, truly, maybe six or eight visits before you can really experience everything. It’s all here, and if Korean food has been on your list of cuisines to try (and it should be), then you ought to trek on down 28th Street and get in line.

The best route to take for your first visit is the Korean BBQ. Essentially, it’s your own personal tabletop grill, where you choose your meats and vegetables, cook them to your liking, and devour them with as many sweet and savory accoutrements as you wish. It smells like heaven, and it won’t leave your clothes until you wash them.

But Emonae also features traditional style Korean recipes that are worth forsaking the always-tempting BBQ. Repeat after me: galbi, bulgogi, bibimbap. You want these foods. You want all of these foods. Look ’em up and tell me you don’t.

Bangkok Taste (not to be confused with the restaurant of the same name in Grand Rapids) is one of those establishments that will never — and should never — go away, because it has such a devoted following. Chances are, you’re coming in here because you live near the neighborhood or somebody has recommended it to you. In my case, it simply has defeated all other Thai food in town! It can’t be replicated, so it has now become a destination of sorts — in Jenison, if you can believe it.

It’s Thai food like you’ve always seen, for the most part, but haven’t tasted. The food, whatever you get, consistently arrives as if it were from a family kitchen to the dining room table. You can taste the heritage of family recipes for generations, as long as you can handle the spice, that is. Not all Thai food is spicy, of course, but they do not mess around here. There’s even a warning at the bottom of the menu. 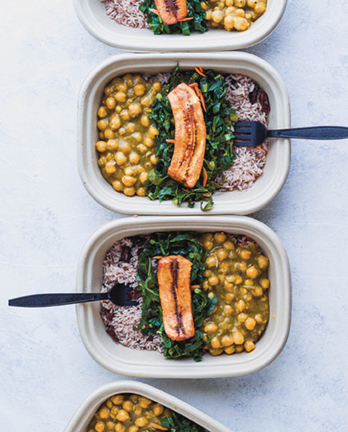 There’s really nothing like Standale. It’s kind of a community all its own, a town in the middle of Walker, yet technically “down the road” from Grand Rapids. In any case, Stan Diego fits, partially because there are no other San Diego-style taco joints around.

What exactly makes food “San Diego-style,” you may ask. Two examples: the fish taco and the California Burrito. Fish tacos first took hold in San Diego at Rubio’s, now a California institution up and down the coast, and they always featured a regional, battered and fried fish served up with some kind of crema and slaw.

The California Burrito — not to be confused with San Francisco’s Mission Burrito — is much the same as any burrito you’ve ever encountered, except that the Cali version is loaded with french fries.

And Stan Diego has both of them! That’s in addition to all kinds of mouthwatering tacos, tortas and tamales. It’s just too bad they weren’t around in my Allendale days. Head there for $2 PBR and $3 tequila shots on Thursday. Vamos!

Sonder Eatery has a “supper” menu, which is very Hudsonville, and yet Sonder also has a menu that looks like it’s straight out of Brooklyn. Mushroom gnocchi? Five-spiced duck? Roasted bone marrow or a flat-iron steak with black garlic steak sauce? This is so not Hudsonville, or at least not the Hudsonville of the past.

Even better, Sonder works with West Michigan farms and companies to put together their menu. You can and should check them all out on their website, as you’ve probably heard of a few of them: Groundswell Farm, Ferris Coffee, Marland Winery, Moraine Park Farms, Regal Bison. Wait, bison in Caledonia? I need to get out more.

Bonus fact: Sonder recently made news for saving the day by catering an entire wedding in 90 minutes after the previous caterers didn’t show. Not all heroes wear capes.

Licari’s is in Hudsonville now! The Italian joint has long been a reliable neighborhood spot in the northeast corner of Grand Rapids, but now here’s a location with even more reliable parking. You’ll find the same great pizza named Michigan’s Best by John Gonzalez and Amy Sherman, but I compel you to get a daily risotto if it sounds like it suits you — they’re spot-on. Wednesdays bring half-off bottles of wine, which is always a fine selection of Sicilian and Mediterranean vino. And whatever your opinion of the beer, never forget how unique it is to see Peroni on draft — what are they, bringing it over by boat?

Right off M-6 near Cutlerville, Irie is a Caribbean street food restaurant adamant about serving up organic, non-GMO foods. Its menu is heavily Jamaican influenced, sparse and extremely healthy! The jerk chicken is a classic, and you can get a whole one — yes, a whole chicken — for less than $16. I don’t know what you pay for your organic, non-GMO chickens, but it doesn’t come marinated and baked as perfectly as this. If you feel like stepping a little out of bounds, go for the curry garbanzo beans and the sorrel (a tangy, acidic herb) drink. Can’t find that anywhere else!

Tweet
Published in Dining
More in this category: « Sip, Savor, Sample: A firsthand preview of Restaurant Week 2018 Taking Flight: Revue samples wings across the spectrum »
Login to post comments
back to top