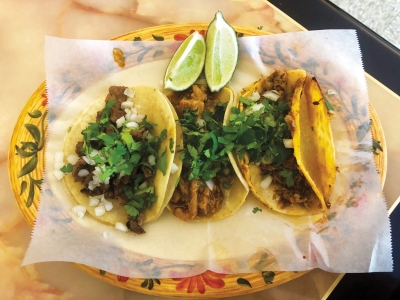 A good taco should explode with flavor. After all, the etymology stems from the sticks of dynamite Mexican miners used to unearth silver. Their explosives happened to look a lot like lunch — cylinders of meat, tortilla and salsa with a smattering of cilantro and onion for good measure. The equation is simple, the execution often isn’t. While some fuss with tweezed microgreens and vegan substitutes, the best way to experience a taco is how you would on the streets of Mexico City. Revue went on a hunt for the unsung gems that give a taste of one of the world’s most iconic cuisines.

Tucked in a nondescript corner of an Alpine strip mall, Jalisco’s interior was anything but cookie cutter. Walls glossy with red and yellow paint, streamers and smiling masks adorned. Was Ronald McDonald hosting a pinata party? No matter, it’s taco Tuesday so I order an al pastor double whammy. Fresh pineapple chunks complement the sweet while leaking acidity on the meat. A guajillo earthiness in the salsa roja added depth too, but despite the balance, I’d give an arm and leg to just carve from the spit and eat their al pastor until my stomach lining ripped like a ziploc bag.

Jackson 5 was on the radio, so I had to pick my ABC’s: asada, birria, chicharron. Steak was a crowd pleaser. The birria — shredded goat — succulent and complex, must have bathed in achiote paste all day. Finally, a new filling to me: the chicharron rinds weren’t crunchy, rather simmered until tender. So soft, you could ease through the strands with a spoon like pork gelato. In a mustard bottle, I found the salsa verde, green as a plutonium rod, piquant as a garden pepper. I blasted my tacos with it and didn’t leave a bite uneaten.

After months of snow and bluster, a trip to Cancun sounds nice. I settled for the local option. A marlin mounted on the wall tempted seafood, but I satisfied a barbacoa fix instead. Although it's traditionally served on birthdays, baptisms and weddings, I ate mine alone in a booth. Their beef was so good, it made even the saddest meal feel special. The tortillas were awesome to boot: mini Milagros, the perfect vessel for an eating contest. I brought home some chicken tacos for later and yeah, they were clucking good too.

Time to go hog wild for pig at Maravatio. The carnitas are confited perfectly, served gristle-free. Suadero — meat from where a cow’s or pig’s leg meets the belly — was the breakout hit though, a textural paradox, at one moment crisp, the next melty as pot roast. The green and red salsas were familiar, but a third tan salsa left me stunned. I’d guess arbol, chipotle and habanero peppers blended together. The secret was not disclosed. On the front of shop, a mural displays tribesman gazing with hope to an Olmec figure in the sky. Today, I looked at my tacos with such affection.

I’ve frequented the Cunado hut on Bridge for years, but rumor had it that the OG Burton restaurant was different. I left dinner a changed man. A taste of the camaron converted me from a shrimp tolerator into a shrimp believer. Springy with a pop of salt water, it tasted freshly plucked from the ocean. Also unreal was the chorizo, a closing of the sweet and savory venn diagram, with a spice blend I’m still trying to decipher. The tortillas bent without losing structure. Each salsa was unprocessed by machine touch. No joke, this was some of the best food I’ve ever eaten.

Tweet
Published in Dining
More in this category: Poultry Paradise: Heavenly chicken sandwiches in West Michigan »
Login to post comments
back to top