IPAs Won't Go Away: Here's How to Like 'Em 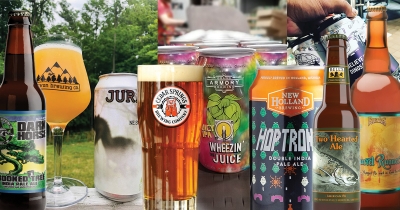 Our lizard brains weren’t designed to enjoy bitter flavors. In our hunter-gatherer heyday, if you found yourself chewing on a bitter leaf, it probably meant you were mere seconds from foaming at the mouth. Stick with the sweet berries, they said; they’re safe. In spite of this primal distaste, we persist, scouring for bitterness like masochists.

Case in point: the IPA. The bitter style has endured as the industry’s bedrock for decades and it shows no signs of receding. A 2019 Craft Beer & Brewing poll showed supply begetting demand — IPA was both the most popular beer to brew and the most popular to drink. Basically, if you’re going to drink craft, it’s in your interest to like the stuff. That said, your mileage largely depends on how friendly your tongue is toward hops. To ease any burn, here’s a step-by-step guide on how to get better acquainted with IPA.

The Trojan horse of IPAs, the juiciest of their ranks could pass for a glass of OJ. Soft, citrusy and sweet, they’re a sensible entry point for newbies. The secret ingredient here is timing. Late addition hops in the boil boost flavor and aromatics while tempering bitterness, letting you appreciate the essence of hops without all the astringency. Plus, the beer scene’s swimming in these, so you’ll have no trouble finding examples to sample.

Now that you’ve got your sea legs, saddle up with a classic. Tried, trusty and true, the American IPA has staying power because of its adherence to the Goldilocks principle: Not too malty, not too hoppy, just right. Grapefruit and grassy notes are common, but with more than 80 varieties of commercial hops available, flavor combinations are infinite as any given brewer’s imagination.

As your palate grows callous, the best answer is to blast it. In brewing a double IPA, the equation is simple: More everything, please. You’ll notice a significant uptick in sweetness thanks to the huge malt bill. Keep your eye on ABV: At 8% and over, glug a few too quickly and the IPA acronym gains new meaning as Incapacitated Puking Adult.

Like the monstrosity that is a turducken, no one questioned whether we should barrel-age an IPA. They just asked, could we? Confound your mouth with one of these fringe experiments that defy the boundaries of booze. Bourbon barrels work best, the vanilla and caramel a suitable pair to a malty IPA, but there’s room for other cocktail-inspired concoctions. If you enjoy flavor at its extreme, then you’ve discovered the holy grail.

After scorching your palate with IBUs, a return to restraint is most appreciated. Expect biscuit, floral and herbal notes, but nothing overpowering. The equal malt-to-hop ratio doesn’t make for a flashy beverage, but balance makes the style worth repeat pours. This is what Odysseus would sip after kicking off his sandals in Ithaca. Your IPA journey has come full-circle, weary traveler.

IPL: The missing link between IPA and lager, IPL fuses the crispness of a pilsner with the bitter nature of hoppy beer. Sessionable, but with considerably more oomph than your typical schwag.
Try these: Short’s Brewing Company’s Devil’s Lettuce

Milkshake IPA: The Milkshake IPA doesn’t take itself seriously. Sweet as candy and smooth as milk, it’s what you’d find on draft at the circus. Drop a scoop of ice cream in your pint if you’re feeling particularly blasphemous.
Try these: Austin Brothers Beer Co. Tropical Smoothie IPA

Clamato IPA: Not even once.

Tweet
Published in Dining
More in this category: « Soups, Stews and Brews, Oh My! Wrap It Up »
Login to post comments
back to top