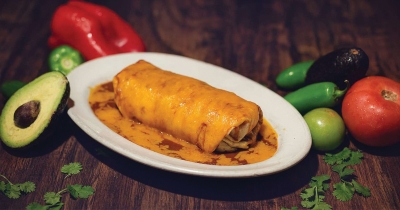 With the present slowed down to a near halt, it’s the perfect time to reflect on our culinary past.

West Michigan has innovated some great food that has since spread across the Midwest and beyond. While the olive burger may not be as widely known as the Philadelphia cheesesteak or Chicago deep dish pizza, it’s certainly iconic — and delicious — in its own right.

As with any legend, the history behind these dishes can get a bit hazy at times, but that makes them all the more fabled.

The next time you’re ordering out, take a bite of an icon.

The Beltline Bar claims to have invented the wet burrito in the 1960s. Fifty-some years later, it’s still a fan favorite!

As the story goes, the restaurant originally focused on popcorn and chili dogs, until one day when the kitchen staff accidentally received flour tortillas. They decided to fill the tortillas up with ingredients on-hand and top them with sauce as a daily special. The customers loved it so much, the dish stuck.

The wet burrito is the pinnacle of Midwestern food culture: a massive, saucy dish from another culture that’s been altered and must be eaten like a casserole. It’s the kind of meal you eat in one sitting because you just can’t stop, then go into a food coma for the rest of the night. The style is now ubiquitous across nearly all Mexican restaurants, at least in West Michigan.

As a side note: The wet burrito does differ from an enchilada, which is smaller, open-ended, served in corn tortillas and often baked with the sauce on top.

Did Yesterdog invent boiled hot dogs? Obviously not. But the Grand Rapids mainstay is certainly an icon. It’s a soft bun, ballpark hot dog, and toppings practically thrown on top, all served by matter-of-fact employees in a cash-only, highly vintage setting. When you have a wall full of photos of famous people who’ve stopped by, you know you’ve made it.

I once waited — outside, in January, during one of Michigan’s coldest winters — for three hours to eat a few Pronto Pups. The tiny, cash-only, hot-dog-on-a-stick stand has a line down the street nearly every day, through all of summer. People wait because Pronto Pup is such a fixture of Grand Haven, dating to the ’40s, and because they’re really that good. I don’t know what their secret is, but the texture and flavor of these battered beauties are unlike any other: crispy on the outside, fluffy on the inside, with a juicy hot dog in the middle.

When your fries are so popular you have to change the name to something less potentially offensive before your growing restaurant chain gets too big, you have a winner on your hands. In fact, HopCat celebrates its anniversary with a Fry Eating Contest at every location. The sturdy, beer-battered fries are covered with a “signature cracked black pepper seasoning” that includes a hint of sugar. I always get them with a side of amazing cheese sauce. And let’s just say I rarely leave with leftovers.

The Cottage Bar has been around since 1927 for a reason: Its food is damn good. Most notably: The Cottage Burger is many people’s favorite burger in Grand Rapids and, in fact, was once voted Best Burger in Michigan by USA Today. The dark rye bun, pile of green olives and signature hickory mayonnaise make it, along with a perfectly sized patty. It’s one-of-a-kind, uniquely delicious.

Back in the 1950s, Gus and Tom Fricano were inspired by a trip to Chicago and hopped on the pizza train. Supposedly, Fricano’s was one of the first places to serve pizza in all of West Michigan, and the small, family-owned chain has remained iconic ever since. Fricano’s style is unique, with extremely thin crust, toppings all the way to the edge and a limited selection. At the original Grand Haven location, you can only order one size, a 12-inch thin crust, and the only toppings are sausage, pepperoni, mushroom, green pepper, and anchovy. Simplicity — that’s how you become an icon. There’s something about the thin, crispy crust and gooey cheese that’s irresistible. And like many people, I crave it constantly.

Tweet
Published in Dining
More in this category: « Restaurant Relief: Eateries Helping Out In the Community Jimmy Berger’s Is Bringing Something Entirely New to Town »
Login to post comments
back to top