Jimmy Berger’s Is Bringing Something Entirely New to Town 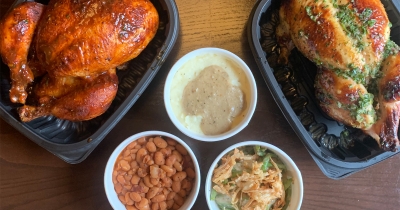 At least, that’s what Essence Restaurants decided to do this week, closing a longtime favorite Grand Rapids restaurant and shifting the space to better suit the pandemic’s needs.

Essence announced that Grove would be closing permanently and becoming Jimmy Berger’s Chicken Shack, a pop-up concept offering roasted chicken — not fried chicken, to be clear.

This sparked a massive response on social media. Reading through the Facebook comments, it’s clear that the intimate East Hills restaurant meant a lot to the community. It was one of the first farm-to-table eateries around, and was especially known as a place to celebrate anniversaries, birthdays and other special occasions. Over the course of its nine years, many people developed lasting memories there.

As such, it was an extremely hard decision for Essence to make.

“It was very emotional for us to make that decision and definitely a few tears were shed when the realization of what we were doing (sunk in),” said Managing Partner James Berg. “I mean, Grove was doing well. Sales were going up and we were hitting a new nerve with ‘comfort redefined’ and people were gravitating toward it just to eat.

“But I think a pandemic is more powerful than anything else.”

Sadly, with Grove’s size and concept, the restaurant simply wasn’t equipped to make it through the pandemic. As restaurants slowly open back up, it will be with limitations that drastically reduce capacity, meaning Grove would likely only be able to hold 30 diners on a given night, which simply isn’t sustainable. Meanwhile, Essence’s Bistro Bella Vita will be able to sit closer to 180 people while still having 8 feet between tables.

As for takeout, Berg said the high-end Grove did maybe one order a month before this, compared to Essence’s Green Well, which is so slammed with takeout orders they’re basically unable to keep up.

It clearly wouldn’t make sense for Grove’s space to sit unoccupied until COVID-19 is completely eliminated, which could be up to a year from now, and the staff can’t wait around for that to happen either.

Thus enters Jimmy Berger’s Chicken Shack. The idea is to do something no one else is doing — whole-roasted chickens and sides for carryout — while offering an alternative takeout option that hopefully can take some of the pressure off of Green Well.

This weekend, May 1-3, Jimmy Berger’s is going through a soft opening, just offering whole birds and side bundles. During the soft opening, you can place your order between 10 a.m. and 2 p.m., then pick it up later that day!

Starting Tuesday, May 5, the full menu will open up, with a chicken parmesan sandwich, chicken tender basket, salad and more.

The restaurant is currently billed as a “pop-up” due to how quickly it came together, but Berg hopes the chicken shack will do well enough to transition to a full-time, fast-casual style restaurant with drinks at the end of this.

While Grove will surely be missed, the move was a necessary one, and Jimmy Berger’s is exactly the kind of place we need right now, an easy pick-up spot offering high-quality, unique food. And more importantly, it’s offering something new.

“It’s our job to fill the void in the market,” Berg said. “As Steve Jobs said, it’s our job to create something people don’t know they want until we show it to them.”

Tweet
Published in Dining
More in this category: « West Michigan's Most Iconic Dishes Annika’s Takes Grilled Cheese To Another Level »
Login to post comments
back to top