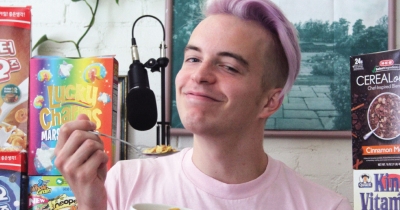 Battle Creek could reasonably be considered The Birthplace of Cereal.

In the late 1800s, the Kellogg brothers accidentally invented toasted corn flakes in the sanitarium they ran; thus, Cereal City was born. To this day, the small West Michigan city is home to the Kellogg’s headquarters. The brothers’ diet also inspired one of their patients, C.W. Post, to go out and create Post Cereals.

It only makes sense, then, that the world’s top cereal blogger would live in West Michigan as well. Dan Goubert, a Grand Valley State University alumnus and local copywriter, runs Cerealously from his home near Grand Rapids. The name is as tongue-in-cheek as it is a mouthful — puns intended — and it’s as much a creative writing exercise as it is informative.

If you want to read about the newest cereals while laughing the whole time, if you want an inside look at the archives of Kellogg’s headquarters, if you want to reminisce on retro cereal packaging and brands … Cerealously is for you.

Goubert started the site years ago as a way to begin writing, but his love for cereal is real. He eats it daily, especially as a midnight snack, at one point in college having about four bowls per day. His audience and connections have grown to the point where companies and people in other countries send him new cereals to review — much easier than driving from store to store for hours — partly thanks to his other venture: The Empty Bowl, a meditative cereal podcast.

He teams up with successful podcaster Justin McElroy — of My Brother, My Brother and Me and The Adventure Zone fame — to soothingly discuss the taste, texture, and experience of cereal, while ambient music and crashing waves play in the background. It’s funny, calming and tantalizing. I can safely say there’s nothing else like it.

The podcast has seen great success, with prominent fans like Lin-Manuel Miranda and Ben Schwartz. It’s reached 2 million streams and may well be responsible for a groundswell of enthusiasm that brought back Tropical Froot Loops and Malt-O-Meal Blueberry Muffin Toasters.

What started as a way to write about a niche passion became a means for giving back, with Empty Bowl donations split between a West Virginia food pantry and Cerealously maintenance, though lately Goubert has been passing that money onto Black Lives Matter causes.

Revue talked with Goubert about what cereal means to him, and to us all.

What cereals available in West Michigan should the reader buy right now?

The other would be Trader Joe’s Organic Raisin Bran Clusters. Whether you love Raisin Bran or hate it, you need to try this to upgrade your perceptions, because it’s by far the best raisin bran cereal out there. The clusters are amazing and it’s one of my all-time favorites.

How does living near Cereal City affect your work?

It was helpful during the beginning, because I would go to the Cereal Fest in Battle Creek — a collaboration between Kellogg’s and Post. It’s basically a giant breakfast table where you can get as much cereal as you possibly want for free. It was really fun to do, even though I was living on the east side of the state, and the whole event only happens like 8 a.m. to noon. Cereal and Pop Tarts are all I ate for my whole day’s nutrition and I wanted to die for the rest of the day.

I also got invited to tour the Kellogg’s headquarters once and go through their cereal archive of different advertising memorabilia from back in the day. They have a record of everything they’ve ever made, including things even the marketers didn’t know existed.

Why is cereal so nostalgic?

I think it’s baked deep with other nostalgic things, like watching Saturday-morning cartoons, with cereal commercials, while eating cereal. I do think the nostalgic appeal may be slowly giving way because kids today are less trusting of brands in general. I hope people can see it as more of, cereal the exercise or as a calming ritual, more so than just the icons. But there’s an interesting interplay between the two.

Why is cereal itself a calming ritual?

Cereal’s a food you have to pay attention to while you’re eating to make sure you’re eating it at the right speed to get the perfect texture, yet you can still enjoy it while your mind is being numbed by something else like television or videogames. There’s also the general association of cereal with childhood that’s an immediate mental escape.

What’s the response been like to The Empty Bowl?

The reception was crazy, even to Justin, how much people liked the idea. The McElroy audience is a lot of young people and an intersectional audience, and I get to interact with a lot more people from the LGBT community. It’s made me feel a lot better doing this cereal enterprise.

People have said it’s helped their anxiety and insomnia and helped them during difficult times. I’m grateful to have that opportunity because it’s obviously not what I imagined the result being when I started. I’m grateful I can have that positive effect on people, just by talking about something I love.

Tweet
Published in Dining
More in this category: « Gluten-Free Grub BOTW 2020: Dining Winners »
Login to post comments
back to top