Eats from the Eastside 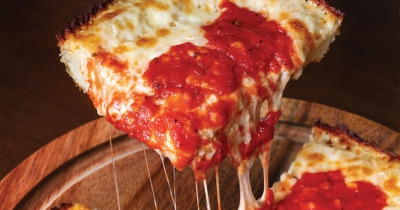 You know your city’s made it big when it has its own style of pizza.

Detroit-style pizza is one of the most distinct pies out there. Rectangular in shape, sauce on top, brick cheese, thick and fluffy crust with a crispy edge — it turns pizza inside out and upside down. More so than most doughs, the porous, focaccia-like crust absorbs the flavors of the toppings and cheese above it, especially since there’s no layer of sauce in between.

If you’ve lived your whole life in West Michigan, you might just know the Detroit way of doing things as “Jet’s Pizza.” But the style has exploded across the country in recent years, as people realized how special this amalgamation of textures and flavors really is.

In fact, we now have multiple options for Detroit-style pizza on the west side of the state, and I’d guess there are more to come. It’s the perfect time for you to see what all the fuss is about.

In reality, Jet’s was inspired by Buddy’s Pizza, a Detroit pizzeria — and at one time, speakeasy — that invented Detroit-style in the 1940s. As always, the exact story of the dish’s creation is contested, but we do know it was somewhat inspired by Sicilian-style pizza and baked in blue steel pans originally used for automotive suppliers. The goal was to maximize the penetration of the toppings into the crust and clearly, they’ve indeed done that.

Now, decades later, Buddy’s Pizza has finally made its way to West Michigan with steel pans in hand.

I have yet to meet someone who doesn’t love Buddy’s. While the debate over grease in pizza can be a contentious one, Buddy’s seems to have found the crowd-pleasing Goldilocks amount — it’s not drenched, but far from dry. The authentic Wisconsin brick cheese supports lovely ingredients and a robust sauce.

There’s a reason Buddy’s is now 15 locations and growing. The pizzeria defined the crispy/fluffy/saucy style others seek to imitate and hasn’t lost an ounce of quality in expanding across the state. This stuff is craveable.

Plus, there are tons of great signature pizzas, like the Greektown, with brick cheese, feta cheese, spinach, garlic, red onions, diced tomatoes and fresh dill, all served with original garlic parmesan dressing. That’s a transcontinental meal right there!

The key word of 2020 is “pivot” — and that’s exactly how Quarantino’s came about. Owners Joel Wabeke and Sarah Wepman were forced to shut down Kingfisher Restaurant & Deli due to the COVID-19 pandemic. Before that even existed, however, they secured the former D’arts Donuts building for some sort of future project. Now, it houses Quarantino’s, Wabeke’s longtime dream of making Detroit-style pizza come to life.

His passion for these pies comes through in the final product. Each pizza is more than enough for one really hungry person or just right for two people with standard appetites. The crust is perfectly crispy on the outside, fluffy and porous on the inside, and there’s not a trace of superfluous grease to be found.

As many customers — including me — have noted, the pepperoni is some of the best around and all the toppings are fresh and delicious. The sauce is ladled on top, creating flavor explosions in certain bites that give the whole experience variety throughout.

If you’re looking to really change things up, try a special pizza like the Buffalo Chicken, with spicy Buffalo chicken, blue cheese, mozzarella and brick cheese, ranch, and celery slaw.

OK, this isn’t technically Detroit-style. But hear me out: Sicilian pizza laid the groundwork for Michigan to come along and bring the pies to a new place. Go to Licari’s for the Sfinciuni Pizze, a traditional pizza with a pan-style crust covered in two-year-aged Parmigiano-Reggiano and tomato sauce on top. It’s the prototype for Detroit-style pies, with classic old-world flavors that earned Licari’s “Michigan’s Best Pizza” from MLive in 2016. Buon appetito!

Tweet
Published in Dining
More in this category: « The Case with Waste Bubbling Up »
Login to post comments
back to top