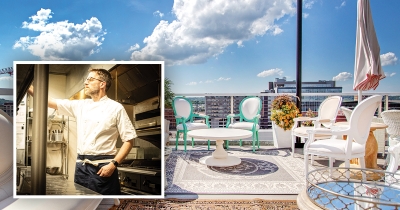 Since the pandemic began a year ago, Mertens has been a shining beacon of how to adapt.

New Hotel Mertens was on the climb in recent years, reaching new heights with the rooftop lounge, Haute, overlooking Grand Rapids. When COVID hit, everything had to change. The restaurant was one of the first to launch ghost kitchens, in the form of Pronto Pasta and 9th Street Steaks.

Now, the eatery is adapting yet again with the introduction of Mertens Prime, “Classic French cuisine and chops set in a restored 1914-hotel lobby and dining room.” Leading the culinary side of Prime is Paul Berglund, recently named executive chef at Mertens Prime, and he comes with an impressive reputation.

He helped open Minnesota restaurant The Bachelor Farmer, and in 2016, he was awarded the James Beard award for Best Chef: Midwest. We spoke with Berglund about how he ended up here, and his plans for Mertens.

Have you always cooked?

As a kid, I did some cooking. You know, the Betty Crocker For Kids Cookbook. But I wasn’t at my mom’s apron tails for my entire childhood. I really started to cook for myself when I moved out of the dorms. I was obsessed with Emeril Live.

What was it about Emeril?

He was this really engaging, charismatic individual. He’ll cook those big pork, the double-cut ones. I saw that and thought, “Here’s a guy who speaks my language.”

You later served in the Navy. Was food an interest during those times? Did you get much opportunity to scratch that itch?

The pivotal time in my life came when I was (stationed) in Japan. The Japanese people really honored craftsmen in a way I hadn’t seen up to that point. And that includes chefs. Even the neighborhood ramen or yakitori chef was lauded by the community — real pillars of the community.

I fell in love with Japanese cuisine, and it opened my eyes to how beautiful but simple food could be.

My second tour of the Navy was just north of Seattle. I started thinking about next steps, and whittled it down to cooking professionally. The next question was: Where do I do it? My best friend lived in Oakland, so I decided to try Bay Area cooking.

The values of the area actually reflect Japanese values. They honor their ingredients. The prime example is the $8 peach at Chez Panisse. We can all laugh at that, but I’m pretty sure those peaches were pretty darn awesome.

The Bachelor Farmer attracted some notable customers, including President Obama. What made the restaurant special?

There were a few things. First of all, the owners have a very sincere love for Minnesota. The state, the people, the culture. They wanted to create a restaurant that really made Minnesotans proud.

They were very intentional in the hiring process, too. I was working with a really talented group of people, from bartenders to restaurant managers. We were all very passionate about the direction we were going.

In 2016, you won the James Beard award for Best Midwest Chef. That’s a big deal. What was your reaction?

I saw it as a tremendous honor. It’s given to the chef, but it’s a tribute to the power of the restaurant behind the chef. It’s a big deal for the restaurant.

Since Bachelor Farmer closed due to the pandemic, you’re now executive chef of Mertens Prime, a French-influenced restaurant.

It led me back to my French cookbooks. I was surprised by how much seemed familiar to me.

As the new executive chef, you’ll be overseeing a menu change. Can you talk a bit about what makes a successful dish? Is it just that it tastes delicious?

Whether a dish is successful has a lot to do with what type of restaurant it is. If a guest’s expectation is that it’s delicious and leaves them stuffed, that’s what you have to do. If a restaurant is known for its creativity and razzle-dazzle, you’ve got that.

A dish that I make is most successful if someone says, “I’ve never had so delicious a tomato,” not “How did they do this?” The latter can be more theater than food. My food is more food.

No, but I am pushing myself to think outside the box of my own experiences — challenge myself to make some food I haven’t made before.

Where are you in terms of the menu redesign?

We’re still in the research and development process of the menu. I have a working menu. Once we’re through that, we’ll look at the big picture and see what makes sense together. So far, I’ve made some real classic French food, but I’m interested in doing more modern food, and French-inspired, too. I’d like to use New Orleans as the inspiration for some of the dishes.

How much should a guest think about the chef?

You know, I like to meet guests and hear their feedback, but it isn’t about me. I really think restaurants serve an important role as being a place that brings people together. As society becomes more fragmented, there’s less of an emphasis placed on shared tactile experiences, and our role becomes more important.

Honestly, I’d be happy if the guests didn’t think about me at all.