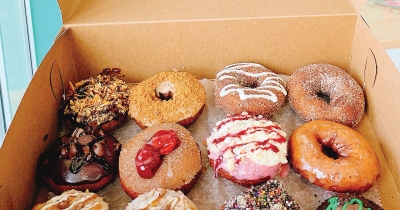 Whatever happens to us, I feel confident doughnuts will never go extinct.

With no end and no beginning —much like the ouroboros of legend — doughnuts represent the cyclical, eternal nature of life. Plus, it’s fried dough! Who could get tired of that? There’s a reason we go all in on paczki during Fat Tuesday here in West Michigan.

Even the true origin of the modern doughnut is unknown, but it goes back centuries, at least. Someone realized fried dough is, of course, delicious. But then someone else realized that big lumps of fried dough often end up raw in the middle, so they decided to cut the center out. Alternatively, you can solve the problem by replacing that dough with fruit, nuts or cream!

Now, doughnuts are a global delight, covering a huge variety of treats, from jelly-filled to glazed, frosted, powdered, holes, cinnamon, apple cider, fritters and more. For my money, the best way to buy is a variety pack of a dozen (or two) different delicious doughnuts.

Shops across West Michigan specialize in these sweet treats, perfect for a morning pick-me-up, an afternoon delight or a midnight snack. Here are a few of our favorites.

Named for Rockford’s Bostwick Lake, this bakery brings in doughnut lovers by the dozen. Long Johns, cake doughnuts, twists, fried cinnamon rolls, apple fritters — Bostwick has it all, and at a great price. The doughnuts are notoriously large here, and dangerously popular, so get there early! Bonus: They even have keto doughnuts. This is your friendly, neighborhood doughnut store, and their other baked goods are well worth trying too.

Do you ever look at a pack of doughnuts and think, “Man, I wish I could try a bite of each!” As much as we love Long Johns the size of our face, sometimes less is more. That’s where Bro’s Doughs comes in, with mini doughnuts made fresh right in front of you! There are more than 50 flavors to choose from, including Apple Crisp, Lemon Raspberry and Thin Mint. Small doughnuts, big tastes, and endless variety — no one does it like Brodie (a.k.a. Bro).

And for our Grand Finale, we head to the lakeshore. This bakery may have started with cakes and chocolates, but the doughnuts have developed their own following. When your goal is to impress, head here for dough covered in bacon, fruity pebbles or other unique toppings.

This classic, community den has a loyal fanbase, with some people driving across state lines to grab a pack. Marge has been making doughnuts here for more than 40 years, and nothing lasts that long without being cream of the crop. Whether you’re looking for a bite right now or need an event catered, Marge will gladly hook you up with a massive variety of doughnuts.

You’ve surely heard us rave about Rise before, but it’s for good reason! Who else makes ALL their baked goods without gluten, animal products, soy or artificial flavors/colors? That’s the hook, but the real story here is that their doughnuts are both delicious and beautiful, perfect for Instagramming before taking a big bite — and then another, and another …

For so many reasons, hundreds of people (if not more) call Sandy’s the best doughnut in Grand Rapids. The old-time feel pairs well with an impressively sweet crew and a gargantuan selection. Sandy and her doughnuts are here to make your day better, whether it’s through excellent service or some of the best fried dough around.

Founder Gary VanderStelt Sr. built Sprinkles from the ground up out of a passion for baking that went back to his youth. Now, his legacy is carried on by the family, with five locations across West Michigan. You don’t go that far without some stellar doughnuts, smiling faces, and a relationship with the community. Head in for a huge variety of doughnuts made with local ingredients.

If you want a doughnut in the Kalamazoo area, chances are, you’re going to Sweetwater’s — they have a reputation for a reason! You’ll find nearly 50 flavors here, including an innovative Doughnut of the Week, such as a Strawberries & Cream Fritter or Peppermint Doughnut.