Fantastic Feasts and Where to Find Them 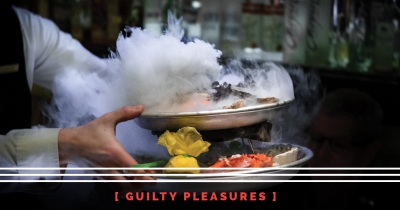 The most extravagant dishes in West Michigan.

There are times in life when you simply need to indulge.

When those moments strike, we all turn to different foods. For some of us, it’s the biggest, messiest burger we can find. For others, it’s the rare fancy dinner with a $100 steak. For certain celebrities, it’s a $13,000 bottle of wine.

Next time you have something to celebrate or need a pick-me-up, grab this list for a few ideas. And if we missed your favorite indulgence, let us know so we can share its wonders with the world!

When you want the most premium steak around, you go for the chateaubriand. The dish consists of a large center fillet of tenderloin, and was traditionally grilled between two “lesser” pieces of meat discarded afterward.

This is the height of luxury — using food as a disposable means of cooking other food.

And while this exact method may not always be used today, the end result remains moist, juicy and roasted to perfection. Chateaubriand’s namesake inventor even died during the French Revolution, so you know he was a true fancy-pants aristocrat.

At 25 ounces and $110, with two sauces included, this Mertens Prime dish is meant to be shared, but no one’s telling you what to do! Live it up, go all out, and for the rest of your life you can talk about the time you had a $110 steak — from an award-winning chef, no less.

If you’re like me, the best way to celebrate is with a monstrously huge meal that any responsible doctor would disapprove of. Luckily, Grand Rapids now has true Chicago-style deep dish pizza.

Authentic deep dish is almost frighteningly thick, like an above-ground pool full of tasty Italian ingredients. Take your taste buds for a swim with Loretta’s, a highly successful ghost kitchen run out of Max’s South Seas Hideaway. Their pizza oven can barely keep up with all the orders, which is how you know it’s great.

Some say two slices of this stuff is a full meal, but we know better: Our advice is to eat until you need a nap.

For years, Stella’s has been known for its extravagant stuffed burgers. The Stella Blue often takes the spotlight — thanks to GQ naming it best burger in America — but the Big Ballah is a one-burger feast.

A half-pound black angus patty is topped with cheddar-stuffed jalapeno poppers and bacon, along with a whole onion ring, lettuce, tomato, onion and pickle. The Big Ballah is a spicy, towering, flavor-filled burger for confident people ready to take on the world. We believe in you.

Sitting 27 floors up, overlooking the city while eating a beautiful edible tree? Don’t mind if we do.

The Árbol de Caramelo is an elegant dessert at modern Spanish eatery MDRD that begs to be photographed. A dark chocolate souffle makes up the earthy base, while a small tree with leaves made of pink spun sugar sits above. Meanwhile, a beautifully glossy dollop of strawberry gelato rests below. It’s a showstopper of a little dish that exemplifies the idea of treating yourself, and shows off what MDRD is all about.

Every burrito at Lindo Mexico will very likely leave you with leftovers, but the Chef’s Burrito takes it to another level.

A massive flour tortilla is filled with refried beans and a double serving of meat, then topped with sauce, cheese, sour cream, onions and cilantro. If that’s not enough of an indulgence for you, make it a dinner with Mexican rice, refried beans and chips. Might as well throw a Corona-rita in the mix while you’re at it — we always do.

To be quite honest, this one’s on my bucket list. It may not be the most sophisticated way to eat sushi, but I’ve always dreamed of the server bringing out my giant boat of raw fish to share with a loved one.

The Love Boat at Ju is an actual boat-shaped serving tray loaded up with 14 pieces of nigiri, 14 pieces of sashimi, an Alaska roll, calamari salad and a choice of soup or salad. It’s the kind of dish that draws eyes and makes others jealous, and isn’t that the ultimate indulgence?

For most of us, The Chop House is a place for special occasions. The downtown restaurant is known for its steaks, dessert and cigars, but the raw bar is where you really impress.

Revel in this Seafood Platter, filled with $80 worth of shrimp, fresh lobster meat, oysters and jumbo blue crab. If you like cracking shells as much as we do, this is heaven. Maybe the dish is meant as a shareable appetizer, but at least once in life, everyone deserves to eat as much seafood as they can handle.

San Chez is always a treat, but now you can get the tapas treatment at home without emptying your wallet. Go for the 5 for $50 special, offering a five-course feast of tapas designed to feed two. You get to choose the dishes from a list of Spanish tapas, from croquetas to patatas bravas, ajo al horno and more. Might as well throw in a bottle of Spanish wine while you’re at it; remember, we’re treating ourselves here.

Wake up to decadence: Take two slices of French toast and put a whole bunch of chocolate-hazelnut spread in the middle. Then top that with bananas, chocolate sauce, and whipped cream. Heck, might as well make it a double!

Tweet
Published in Dining
More in this category: « Domes, Heaters, and Tents: Winter Dining GR Noir: Wine for the People »
Login to post comments
back to top