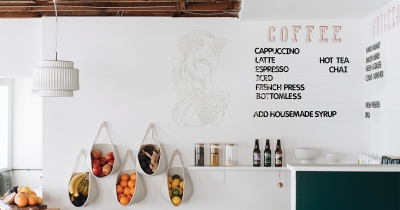 Gaia Café is not, has never been, and will never be a typical restaurant.

When the beloved neighborhood eatery closed roughly six years ago due to former owner Rick Van Dam’s sudden retirement, the Grand Rapids community deeply mourned its loss. As part of the old guard of local establishments — 32 years of business when Gaia "closed" — it couldn’t easily be replaced.

Gaia carries with it a unique attitude and a culture of togetherness, alongside uniquely delicious vegetarian dishes. It was described as a sort of local church and a waystation. It’s known for bringing people together.

In 2017, a Kickstarter promised to bring Gaia back, and the support poured in. Now, after all these years, former Gaia manager Andrea Bumstead has resurrected the business with the same vegetarian menu and same attitude in a new neighborhood.

“It wasn’t a typical restaurant, the owner wasn’t typical, the people that came in there weren’t typical,” Bumstead said. “Every time you went, it was almost like you were part of the story; that’s why I loved working there so much. It was like being part of a story or a book that was somebody was frantically writing.”

That manifested in an unassuming dining space full of comfortable furniture, hardwood, chalkboards and plants. It was a mystical, romantic place, seemingly without trying. Much of that charm came from Van Dam’s firm “The customer is hardly ever right” worldview, leading to a fully realized experience that came from the owner’s heart, not others’ whims.

The new Gaia at 1553 Plainfield Ave. NE isn’t identical, but Bumstead has achieved the same welcoming, artsy vibe, and tries to use the lessons she learned from Van Dam. All the chairs have been reworked by local artists, alongside more local art inside and on the mural outside.

As for food, Bumstead brought back the same menu and same famous cookies, while adding an impressive juice and coffee bar. Everything remains made in-house. For the uninitiated, try one of the best-sellers: Veggie Stash or Mean Green Burrito.

The Veggie Stash has assorted steamed veggies on your choice of brown rice or potato, along with garlic, ginger, tamari, cheese, scallions and sour cream. Fans have been raving about it, thanks to the combination of comfort, freshness and flavor. Sidenote: Gaia can make just about anything vegan!

While you’re at it, grab a juice made fresh from fruits and veggies. How’s your immune system doing? Maybe you could use the Citrus Survivor, with orange, grapefruit, lemon, carrot and turmeric. Or try the V Mary, a virgin Bloody Mary with a kick.

Due to the restaurant’s cult following, Bumstead had some flexibility with location, but it certainly doesn’t hurt that Creston is a growing neighborhood full of art and culture. It’s a great fit for somewhere like Gaia and its partner venue, the DAAC, which is also making a comeback after being closed for years.

It took years of work and trying (and failing) to get a building and funding, but apparently Gaia was meant to be, because it all came together with the help of the community.

While dining in is limited, former regulars are returning and Bumstead has brought her family into the fold, increasing the sense of community. Her oldest daughter helps manage the coffee bar and social media, while her husband cooks on weekends, and her son does dishes and prep throughout the week, and her mother helps as a greeter and takeout person, and her cousin is a server and barista.

They’ve taken the opening relatively slow and easy, but soon Gaia hopes to give back. “We’ve got a lot of ideas on the table. We want to do like an artist night, and we want to hold some cooking classes. And we want to do a lot more community outreach and community projects and things like that. What that looks like right now, I’m not certain, but we have ideas.”

In the meantime, now’s your chance to experience it all. Whether you’ve been going for decades or have never heard of it, a new community is forming at Gaia in Creston, one that’s here to stay.

Tweet
Published in Dining
More in this category: « GR Noir: Wine for the People Spain Above the City »
Login to post comments
back to top