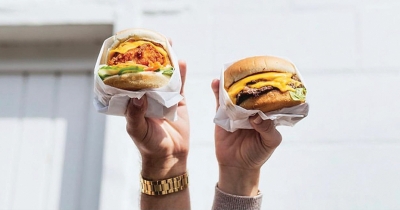 While breakfast is known for being the most important meal of the day, we’d argue lunch is slightly more essential. There’s nothing better than a steamy bowl of soup or a crisp, cold sandwich to break up a workday afternoon.

It’s also a great time for a short chat with a friend or colleague — cheaper and less of a commitment than dinner. Not to mention, a great lunch makes sleeping through breakfast on the weekends a noble feat. At these West Michigan restaurants, you’ll find loads of treats to try for the new and improved “most important meal of the day.”

These eats are so good, you might accidentally leave your packed lunch at home more often. We won’t tell.

Picture a plate piled with traditional spice-rubbed BBQ, from-scratch sides and a variety of sauce, plus a glass of draft root beer to wash it all down. You’ve arrived at Two Scott’s. Scott Hartmann and Scott Leucht formed the restaurant with Hartmann’s perfected at-home BBQ recipe and Leucht’s professional kitchen experience. The duo claim to be two regular guys who make extraordinary BBQ, and, well that checks out. The smoked meats and sauces here are to die for, but luckily, you don’t have to — heaven really is a place on Earth.

Curry, katsu, kimbap and creativity are what KCM’s Japanese and Korean fusion menu is made of. KCM is not afraid to color outside the lines when it comes to lunchtime options, with authentic and delicious sandos. Take the Spicy Korean Kalbi Tacos, for example: Composed of spicy pork, fuji apple and cabbage, mayo and housemade pickled radish, this dish isn’t the Taco Tuesday you’re used to. Head to KCM for something new!

Don’t let the name fool you, Kaffeine serves far more than just coffee. Lunch specials feature an array of rice bowls — from bulgogi to veggies — alongside other options like ramen and japchae. And when it comes to coffee, Kaffeine clearly has you covered. Try a spicy mocha, caramel apple latte, or a turmeric ginger chai latte if espresso isn’t your thing. Kaffeine is a one-stop-shop for a filling lunch and fancy coffee, so don’t be shy — grab a bite to eat on your way in and a bag of beans on your way out!

History buffs and foodies unite! Choo Choo Grill has extraordinary burgers with a story to match. Built in 1924, the Choo Choo Grill was once an office for a coal company before it became the famed neighborhood diner 20 years later. If a one-pound burger sounds a bit too intense for lunch, the Choo Choo Grill offers a wide variety of sandwiches and a couple salads. You might as well add a chocolate peanut butter malt to your order, too.

If you call yourself a Grand Rapids local but haven’t been to Uncle Cheetah’s for lunch yet, you’re not quite there. Uncle Cheetah’s offers 12, from-scratch soups every day, alongside sandwiches, salads and tacos. Gluten-free and vegan options abound, not to mention the infinite combinations of rotating soups, fresh salads and gooey grilled cheese sandwiches. Uncle Cheetah’s has a stand-out reputation among locals for a reason!

A good, classic deli sandwich bursts with greens, cheeses, meats and is wrapped in soft, doughy bread — it’s the kind of sandwich you have to work hard to fit your mouth around. A great deli sandwich, however, comes from Schnitz Deli, another Grand Rapids staple. The menu features over 20 sandwiches, as well as a create-your-own option, if that’s not enough. Every sandwich is built on house-made bread, and you can buy loaves of it to-go at the Schnitz Bakery a few blocks down from the deli.

The words “lunch” and “sandwich” are basically synonyms at this point, which makes Two Beards Deli the perfect mid-day spot to eat. Just shy of 100 sandwiches on their menu, Two Beards Deli has named every dish after a famous bearded figure. From Tchaikovsky to Salvador Dali, the menu will make you laugh and make your mouth water at the same time. Plus, there are tons of options for vegetarians and vegans. Pro-tip: If you’re indecisive, look the menu over ahead of time.

If you’re in the mood for a colorful dish that will nourish your tummy and Instagram feed, look no further than Fruition, an acai and juice bar with smoothie bowls that look almost too pretty to eat. Also an avocado lover’s paradise, Fruition serves avo bowls — essentially a salad with an all-avocado base. Between bowls, wraps, bagels, juices and smoothies, Fruition doesn’t mess around when it comes to a seriously tasty and healthy lunch that looks as good as it feels.

We’ve all missed traveling over the past year and a half, but for The City Delicatessen, the sightseeing never stopped. Each sandwich on their menu is named after a major U.S. metropolitan area, so whether you’re craving a trip to Denver or Dallas, you can order the sandwich version of that destination. Hot paninis, cold sandwiches, wraps, salads and soups abound at the downtown Holland cafe. Be sure to ask for a slice of the homemade lemon poppy seed bread while you’re there — it’s the perfect balance of sweet, sticky and tangy goodness.

Nonla Burger might just be the cutest burger joint in all of West Michigan. Though the inviting atmosphere may be what draws people in, it’s the food that makes them stay. Nonla serves seriously good eats at seriously good prices, with a mixture of classic burgs and creative specials. Alongside stellar burgers and fries, Nonla also offers a shake of the day, rotating between chocolate, French vanilla and strawberry flavors.

Calling all bagel lovers! Good Earth Cafe is about to be your new favorite spot. With 20 signature, house-made bagel flavors — from cheddar herb, to pumpernickel, to Dutch apple — Good Earth Cafe is known around Holland for their doughy delights. Hoping to provide clean eats to the Holland community, Good Earth Cafe has ditched the grill and fryer for meals made with fresh ingredients.

Self-described as “A place where California attitude meets Michigan sensibility,” Kitchen Zero is a breakfast, brunch and lunch joint designed to be a restaurant, deli and cafe in one. Kitchen Zero offers to-go options like customizable charcuterie and fancy groceries. Come for the Figgy Goat crepe — a savory-yet-sweet French pancake stuffed with prosciutto, goat cheese, candied pecans and fig jam — or try the Tahoe Blue smoothie bowl, a fruity explosion with a beautiful blue spirulina hue. A recent addition to Holland, Kitchen and Market Zero are the perfect lunch destination for an afternoon out on the town or a quick bite before hitting the beach.

Tweet
Published in Dining
More in this category: « Savor the Sea Innovation and Authenticity at Paul Thai »
Login to post comments
back to top