Innovation and Authenticity at Paul Thai 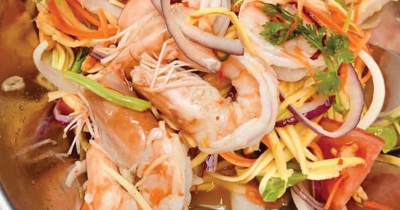 Paul Thai sits on a commercial strip of Plainfield Avenue, rubbing shoulders with a hair salon and a cash advance store. An attractive sign (blue and yellow, with stylized flower petals) hangs above the storefront. Drawn curtains prevent seeing into the restaurant, adding a sense of mystery, or at least keeping the heat out.

Open the door, part the curtains, and you will be greeted with a small dining room. The restaurant seats up to 32 people; handwritten notes, taped to the wall, remind visitors that this is a small business, and asks them to stay for no more than an hour (due to COVID). The hostess/server, often the owner’s daughter, will seat you; like her mother, she is friendly and efficient.

In a sign of the times, hand sanitizer sits on the table, as do utensils wrapped in plastic. Unfurl the artfully folded napkin, place it in your lap, and open the menu.

It will take you time to decide what to order. There are 12 appetizers alone. Crab rangoon are not Thai; indeed, there’s evidence that they originated in sunny San Francisco in the 1950s. Consider them anyway. Here, they arrive as little pouches whose fat bottoms and crimped tops make them look like nothing so much as cinched moneybags. Inside is rich, thick cream cheese and flecks of crab.

The chicken wings are another delicious, if untraditional, dish. Look at the plate: It could be a modernist work of art, with the thin strips of carrot, deliberate dots of sauce, finely sliced green onions, and, in the corner, a slice of thick carrot cut carefully into a star. Despite being coated in a sweet, slightly spicy sauce (Paul Thai sauce, according to the menu), the wings’ skin is remarkably crispy, providing saltiness and textural contrast.

But perhaps you’d prefer the chicken satay: skewers of chicken meat, not charred as you see in other restaurants, suffused with an almost floral taste. The satay sauce is nutty and good, like peanut butter’s wilder brother.

But have you had the Gai Yang? I know, chicken breast is not the most exciting of meats. But what if it were charcoal-grilled and coated in a rich, dark, umami-forward sauce? It comes with steamed asparagus, broccoli, baby corn, carrots, and snow peas, so you can feel virtuous (actually, the vegetables are crisp and good).

If you’d prefer hugging the shore, there’s nothing wrong with the chicken fried rice. In fact, there’s a lot right with it, including the large slices of cucumber and tomatoes. It’s very savory, and has a hint of heat. As with all the entrees, it’s more than enough for a single meal. Share, or know that it reheats well.

By this point, your belt has nearly given up the ghost. You’ll have to come back. When you do, greeted with the same warmth and efficiency, shown to the same booth, consider ordering the drunken noodles. It’s a dish unlikely to grace a magazine cover, with its predominantly brown colors.

Taste it, though. Take a fat, flat noodle, spear a piece of protein (perhaps you ordered chicken, or shrimp, or scallops, or…). Get some pepper, onion and tomato, too. You won’t have to hunt for the spicy basil sauce; it can’t be missed.

The dish is spicy, yes, but just spicy enough; the heat is not intense but does assert itself, cutting through the richness, making itself known but never making you regret your order. It’s a complex, well-seasoned dish, with bright flavors. You won’t wish for a glass of milk to drown the pain, but you won’t be bored, either.

The hostess will talk with you, if you ask. She’ll share that her mother has owned one restaurant previously, in Florida, many years before (“I was this high,” the hostess says, indicating a spot a few feet off the ground). They opened Paul Thai a little over year and a half ago. The pandemic did not help matters, but the restaurant maintains a brisk takeaway business; while you’re there, you might notice that several other people walk inside, but none sit and eat.

Too bad. How long has it been since you sat down in a restaurant, closed off from the outside world by curtains, listened to foreign soft rock, and ate excellent food? OK, maybe the soft rock isn’t the main draw. But the food is pretty special, you realize. And there’s so much more to try next time. You pay your bill and walk out, knowing that, soon enough, you’ll be back.

Tweet
Published in Dining
More in this category: « Let's Do Lunch The Pre-Hispanic Flavors of MeXo »
Login to post comments
back to top