Bringing Life to a Community, Through Death 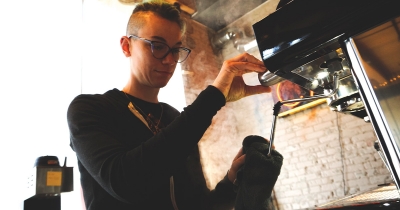 A love of travel and an interest in the macabre may not seem like an obvious pairing, but together they were the inspiration for The Mortals, a “death café” that specializes in conversations around dying, served with a side of Vietnamese coffee.

The brainchild of Abbey Hunter — metalsmith, culinarian, and entrepreneur — the coffee shop and gathering place was created out of a two-fold desire to expose the community to concepts and cuisines they may not have experienced before.

When Hunter visited Vietnam a few years back, she fell in love with the coffee. While there’s no shortage of coffee types and techniques in our city, Vietnamese coffee is distinctly different — in its flavor and richness, and also its preparation. It’s filtered through a four-part metal Phin, which creates zero paper waste. It’s traditionally poured over sweetened condensed milk, creating an intense brew that has about twice the caffeine of a standard Arabica.

Vietnamese coffee is more than just putting espresso through a Phin, though. “I wanted to do it right, and felt a responsibility to honor the culture and the authenticity of its origin,” Hunter said. “I was really lucky to find Nguyen Coffee Supply out of Brooklyn, which sources the Robusta beans from Vietnam and roasts them. It’s the first and only Vietnamese coffee supplier in the U.S. and it’s woman-owned, which is definitely a bonus.”

Traveling has given Hunter a glimpse into other parts of the world, and her natural proclivity toward morbid subjects has shined a light on just how uncomfortable others are in talking and thinking about mortality, whether their own or others’. When she learned about death cafés, the first of which was developed in the U.K., she was piqued. The model is less about a literal space, and more focused on getting people together to talk about death over food and drink — typically coffee, tea and cake.

These meetings can occur at a person’s home or in a communal space, but Hunter decided to open a café proper to encourage these conversations more overtly. “In addition to our planned events and activities, our to-go cups have little prompts on them, such as ‘Write your epitaph’ or ‘How do you see yourself dying?,’ with the goal of getting people talking — with friends, with coworkers, with family,” Hunter said. “By providing a means for people to connect and have discussions, we can lessen the misunderstandings surrounding dying and also provide valuable resources for those grieving or dealing with death.”

Though the café is just getting off the ground, they have already had a successful grand opening celebration with refreshments, tarot readings, and a “plant your own mini graveyard” activity. They also just hosted their first Café Mortel, a free, monthly discussion circle about all things death and dying. Hunter plans to hold these sessions on different days of the week at different times to get a broader spectrum of people involved. There’s no agenda; only the intention of providing a vehicle for talking — about worldviews, about personal motivations for attending, about tough subjects. And, also about life.

What Hunter hopes is that The Mortals will help bring about change in collective attitudes about dying. “Seeing people actively wanting to be more prepared for their own deaths and having them open up about it to me or to others is really important,” Hunter says. “It has surprised me that in West Michigan, which is still pretty conservative and averse to the topic of death, this café wasn’t a harder sell. People are more interested in talking about it than I expected.”

The Mortals is tucked in the back of Little Space Studio — a coworking space in The Harris Building on Division Avenue that caters to creative professionals. In addition to Café Mortel, Hunter is planning for lectures and workshops, whether informative, intellectual or hands-on. The space is also available for private events, from wakes, to weddings, to divorce parties.

In addition to the afore-described traditional Vietnamese brew over sweetened condensed milk, they offer egg coffee, herbal teas, and other worldly inspired beverages, including espresso and batch brew coffee from Littlefoot, a female-owned local supplier. The café’s website, themortalsgr.com, also has a number of links for connecting with professionals, including death doulas, legal advisors, estate planners, and care providers.

Tweet
Published in Dining
More in this category: « The Pre-Hispanic Flavors of MeXo Tiny Dinners Grand Rapids »
Login to post comments
back to top