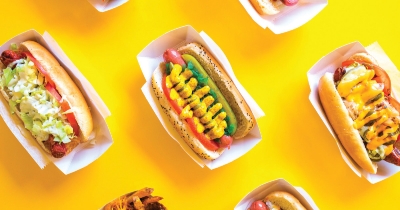 Anyone can cook a hot dog, but making it a memorable meal is another story.

One Stop Coney Shop has been providing downtown Grand Rapids with lunch for over 10 years now, and has only grown more popular in the hands of its new owners, Conor and Olivia Malloy.

In the midst of Covid last fall, founders Leslie and Brian DeGalan decided to head into retirement, approaching the Malloys — former employees — to see if they had any interest in taking over. With years of joint experience in the local service industry, the freshly married couple decided to begin this new chapter of their life together.

Now, one year later, the Malloys have just had their first baby, while continuing to watch over One Stop with a very small crew. It’s been a whirlwind of a year, but Conor said he has a hard time sitting still anyway, so they’ve loved every second of it.

The shop at 154 E. Fulton St. has been serving up delicious dogs for a decade, and the Malloys haven’t messed with the classics, but they have added a few items that drew our attention — as well as dinner service, though that’s been put on pause for the infant, understandably.

When I stopped in to chat, I knew I had to try one of the “ripped” dogs. The rip comes from deep-frying the dogs, causing the natural casing to burst.

I sprung for the super popular Kimchi Ripped Dog, which has a bacon-wrapped deep fried dog, local kimchi, spicy mayo and scallion. If you’re imagining a carnival monstrosity, you couldn’t be further from the truth. The bacon was so thin and crispy, it just added a touch of crunch and smokiness. Meanwhile, the kimchi is fresh as can be, pairing perfectly with the rich spicy mayo. And of course, it’s all offset by the bright taste of scallion.

It’s what dreams are made of, both mine and Conor’s. This isn’t Detroit, after all — we’re not purists here. “Hot dogs are a perfect vehicle for anything. To me, that’s the most fun, being able to church up a hot dog a bit.”

To go with it, I also had a Detroit dog with chili, mustard and onions. With a classic dog like this, there’s nowhere to hide, but One Stop doesn’t need to. They wouldn’t be around 10 years later if their staples weren’t so strong.

Then there’s the Belgian fries, which I dipped in garlic ketchup — enough to save you from any vampire, just the way I like it — and curry mayo, the kind of sauce that instantly becomes the star. They were perfectly fried and seasoned for my taste, like if a professional chef was tasked with elevating fast-food fries.

As great as those were, I still haven’t even tried many of Conor’s favorites, including the Elote Dog (pictured below), patty melt, and burgers. Despite having “coney” right in the name, the burgers are the go-to for many regulars. “People will come for the hot dogs, but they try the burger and then that’s all they get.

You may not expect it from a fast-casual spot, or whatever you want to call it, but this is the kind of food that deserves to be eaten as soon as possible to really appreciate the freshness. That’s why there’s no delivery as of now, not to mention the sense of community the Malloys value so much.

With a small, open kitchen, the staff gets to have plenty of conversation with each other and customers. For the short time I was sitting in the shop, I saw multiple people strike up friendly, yet meaningful chats. And when I walked in, I immediately felt welcome, both due to atmosphere and the few people behind the counter. Plus, the merch made by local artists is a nice cherry on top.

This sense of community goes both ways. The Malloys know and love their regulars, down to whether a certain customer likes onions or not. And the regulars know and love the Malloys, even giving them baby clothes and other gifts. It’s a cycle of giving, begun by the DeGalans before them.

“That’s all we want to do, is try to give back to the community,” Conor said. “This place being open for 10 years is amazing. It’s something we got so lucky to step into. So many new places can take six months before people even know. Our first day, we took the paper on the windows down, turned the ‘open’ sign on, and had people turning right around on Fulton to come in.”

It’s a true mom and pop shop — the mom and pop have just changed. As great as that community is, it would likely all go out the window if the Malloys took this all for granted. Instead, Conor says they’re doing everything they can to provide the best, freshest food possible. In my recent visit, it certainly showed.

“If it’s gonna take three more minutes for me to make a burger I feel good about, I’m going to do it,” Conor said. “We’re not going to skimp on things to try and save. We don’t take it for granted.”

Tweet
Published in Dining
More in this category: « A Restaurant In Your Dining Room
Login to post comments
back to top