K-ROK: Pump Up the Jam 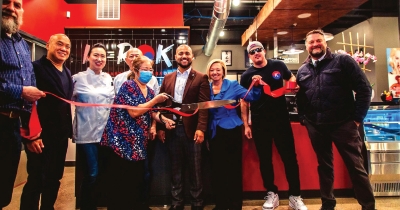 Blending karaoke with the Republic of Korea, K-ROK, a new-to-downtown karaoke and Korean barbecue restaurant, came by its name naturally. The fact that owner Rob Yoon has often been referred to as the Korean Rocky for his resemblance to Sylvester Stallone just made it all the more obvious choice. Add in that Yoon is a big fan of The Rock, and serves his tequila brand, Teremana, at K-ROK… and, well, it all just works.

But, that’s just the name. Where it really all started was the food. And that started with Yoon’s mom, who emigrated to the US from Korea, taught herself English, and put in years of effort to build what the family has today. She brought with her a strong will, as well as her mother’s recipes, giving each dish a special touch that has an old-school feel with just a hint of a modern twist. Yoon calls it “Korean Seoul Food” and strives to keep that authenticity alive.

“All of this came from my mom’s hard work,” says Yoon. “We built this bad boy from the ground up and the process has taught me a lot. I learn something every day.”

Introducing Korean cuisine to Grand Rapids had a long path, starting in a mini-mall in Detroit called Seven Days West, traveling to Lansing and then East Lansing, and finally landing in Grand Rapids as Emonae, in Cascade. How K-ROK came to downtown was a mix of interests. Yoon saw a rise in popularity of Korean food and wanted to bring it to the broader community. At the same time, George Aquino and Amway wanted to bring more nightlife and the diversity of Asian culture to downtown — ideally in one location.

K-ROK is open starting at 4 p.m., Wednesday through Saturday, but look for expanding hours as they become fully staffed and work out logistics for the many offerings they want to pursue. Their menu includes favorites, such as bulgogi, kalbi sal, and sam gyup sal, as well as hot pots and a number of other traditional Korean barbecue dishes. Yoon is also planning to set up a cup-bap station, which was a popular option when they were a food vendor at the Grand Rapids Asian-Pacific Festival a couple of years ago. There, diners can build a bowl with a rice base, then add bulgogi, spicy pork, or sweet potato noodle (japchae), and their choice of sauces.

And, of course, there are the infrared, smokeless grills at many of the tables. Raw, marinated or unmarinated meat is brought to the table, along with proper utensils, and cooked by diners, with support from the K-ROK staff, if needed. The process releases a mouthwatering aroma and creates a memorable — and interactive — dining experience. These barbecue meals come with an Asian ginger salad, kimchi, purple radish, vegetables, rice cakes, and three sauces: ssamjang, sesame with salt and pepper, and spicy-sweet. K-ROK also has a full drink menu and a selection of Korean specialty beverages.

But, what about the “K” in K-ROK? Karaoke is coming soon, if it isn’t up and running already. As of this writing, the Karaoke rooms are not open yet for use, but are expected to be in the coming weeks. There are three private rooms that can be reserved, and both Korean and American karaoke machines will be available. Yoon is also planning for theme night parties several times a month, in collaboration with a local DJ.

Most of all, Yoon is excited to see it all coming together. “It’s a great feeling to see people eat the food and smile and have a good drink and leave with a great experience — and that’s what our goal is,” says Yoon. “We were blessed to be given this opportunity by Amway and the hotel district to get some diversity downtown, pop up the late-night crowd, and let people know that Korean food and culture are pretty freakin’ awesome.”