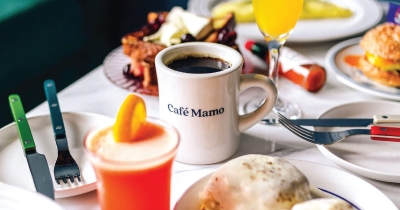 With just 32 seats, an open kitchen and endless personal touches, the Creston restaurant is cozy and inviting, but not at all cramped or exclusive. Between the atmosphere and consistently outstanding meals, Mamo has developed a devoted following in less than a year.

Let’s clear one thing up right away: Café Mamo is not a coffee shop, it’s a restaurant. The term “café” is just meant to signify that this is a small, special place with a carefully curated menu. “Mamo” comes from co-owner and head chef Michael Goessman’s grandmother.

Mamo is passionately against industrial agriculture, monoculture, GMOs and things of that nature, which carried into a love of farm-fresh ingredients for Goessman, along with her philosophy of living humbly and sharing often. Revue sat down with Michael to learn how someplace special as Café Mamo came together.

The Road to Now

Michael and Summer Goessman’s path to Mamo started young and took them all around the country.

Growing up in the tiny town of Gallatin Gateway, Montana, chef Michael was exposed to all kinds of incredible food, since so many residents were actually from all over the country and had traveled the world. That culinary talent included Michael’s own mother, who was the lunch lady at school. She wasn’t just any lunch lady though, her food was so beloved that students’ parents would come in to eat regularly, effectively turning the school cafeteria into one of the hottest restaurants around.

Eventually, Michael went off to culinary school, then ended up in Livingston, Montana after seeing an episode of Anthony Bourdain’s No Reservations that praised the fairly small town. He ended up meeting one of his best friends and greatest mentors there, before moving onto a hotel/restaurant/wedding venue called Rainbow Ranch, where he met his wife, Summer.

Summer was practically running the place, a work ethic that’s extended to laying Café Mamo’s mortar in the absence of available masons, and making the tabletops.

They then traveled to Seattle, Nashville, and New York City, where Michael experienced cooking in unique restaurants and Summer got her sommelier certification while taking advantage of NYC’s bounteous wine and food offerings. Ultimately, their travels led them to Grand Rapids in order to be closer to Summer’s family in Reed City, Michigan.

Buying the building in December 2019, the couple was forced to do much of the construction work themselves. While laborious, it resulted in the cozy, intentional vibe people love.

“The greatest compliments I’ve ever heard of this space are like, it feels like I’m eating dinner at my grandma’s house, or aunt’s house, or my cool friend’s parents’ house. And that’s ultimately the vibe, because without a doubt, the best meals I’ve ever enjoyed have been with friends and family.”

The small space also allows for better service, both in the kitchen and on the floor.

“It comes from a place of attention to detail and just really caring,” Michael said, adding that even from the kitchen, he can visually gauge how customers are feeling and react accordingly. “Every time we send out a plate of food, I see exactly where it’s going. I can read the ticket and know who orders everything.”

Mamo’s menu is small but thoughtful, and heavily influenced by seasonal ingredients.

“When people ask what kind of restaurant is this, I just say it’s an American restaurant,” Michael said. “They’re like, ‘I don’t know what that means.’ Which is good for us, because it can kind of encompass everything.”

Don’t mistake this for a lack of direction — Michael works closely with local farmers, including Apsey Farms, to determine the seasonal menu as well as weekly specials. He even requests unique, “weirder” vegetables for the farmer to start growing now.

“We’re bringing in produce that has worked in other parts of the country but aren’t popular around here, which the farmer is thrilled about, because he can see what works and what people like. The tradeoff is, I’m going to give him recipes that he can put in his CSA box and hopefully create some buzz and demand for it.”

That’s not to say the food is esoteric and unapproachable. For example, the fan favorites are buttered rolls, the wedge salad, and the roasted half chicken. Regulars order the buttered rolls every single time (which I recommend as well), and some people have had the chicken over 10 times in less than a year.

Then there’s the drink menu, expertly curated by Summer, with carefully selected wines and cocktails that focus on doing the classics right. The staff is well educated on all of these and how they pair together.

Yet, despite being a fan favorite, the roasted half chicken also illustrates the trouble Michael faces with using truly quality ingredients.

“People get kind of confused and frustrated by the price ($27), but a real organic, pastured chicken is extremely expensive. The life cycle’s a lot longer. They’re a lot slower to grow, because they’re not eating all the grains and stuff.”

You get what you pay for, and this is the good stuff — not to mention being a large portion. Apsey Farms, one of Mamo’s suppliers, also uses the chickens for regenerative farming.

“The cattle will graze in the pasture and the chickens come behind and they break apart manure and detach the grass and eat worms. Every single lap, the land is getting healthier and the cows are getting healthier because they’re eating more nutrient-dense foods.”

Those nutrients then get passed on to you! So while Mamo’s menu might cost a few more dollars than a chain restaurant, it’s quite affordable for what is essentially fine dining without any of the pretense or fussiness.

“In the Midwest, some people will write something off as fancy immediately. But what our food really is, is it’s just special,” Michael said.

“We take a lot of care and we want more than anything else for everybody to be enjoying every single thing that they consume.”

Tweet
Published in Dining
More in this category: « West Michigan Restaurant Openings & Closings
Login to post comments
back to top