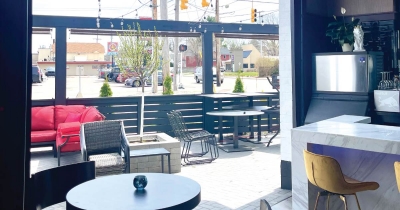 Owner Angel Gonzalez has designed every aspect of Taco Borracho, from the food to the paint, to reflect and honor the many Hispanic and Latino cultures of his family’s diverse heritage.

“Those who understand the culture, and those who don’t, can come in and feel it,” said Gonzalez. You’ll see it in the colors, from the walls to the seats. It doesn’t feel like Grand Rapids. “Every piece of that spot, I was trying to create something that was connected to us culturally, and an extension of that culture.”

To Gonzalez, the most important part of the restaurant is the atmosphere, bringing a refreshing Caribbean escape to Grand Rapids. The biggest compliment he has received is that patrons feel not only welcome, but like they can be whoever they are. “We grew up that way,” he said, explaining that his parents always had their doors open to everyone. “To have created an environment that is like that is beautiful.”

Gonzalez’s father, one of his biggest inspirations and supporters, stopped into the build site every day to admire and encourage the progress, before passing away last December. Although he couldn’t see the completion, his influence is present throughout Taco Borracho.

“My family has been so supportive of everything that we’ve done,” said Gonzalez. The itch to open his own restaurant stemmed from his father, who owned a restaurant himself for many years.

Gonzalez worked exclusively as a builder and developer for the 20 years he has lived in Grand Rapids, and his superpower in that field has always been the ability to let the properties he works with speak to him. So his Spidey-sense — or rather, Angel-sense — was obviously tingling when a small car wash on a prime corner on Michigan St. went out of business. The location chose him, and it told him it had to be a restaurant.

“I was here, day in and day out, for 13 months,” Gonzalez said. “Being able to put in the work and put the time in has been a blessing.” From the designing, to the planning, to city applications, to liquor licenses, to the physical building, he took on every role in the production of the restaurant.

Taco Borracho’s grand opening on May 5 was met with overwhelming business, to the point that Gonzalez was forced to close the doors just three days later. Unphased, he says the whole ordeal was ultimately a blessing, and a learning experience. “It showed us who we are. We weren’t expecting it.”

Turning away over 600 people during the three open days was more than ever anticipated, but made it clear that Grand Rapids was ready for Taco Borracho. And after closing doors, tripling staff, retraining and revamping for a successful and permanent opening, Taco Borracho is ready for Grand Rapids.

The menu reflects the diversity of Gonzalez’s family tree, drawing inspiration from a wide variety of Hispanic and Latino cultures.

Traditional Mexican tacos —  “a beautiful gift to this country” — headline the menu, followed by Puerto Rican tostones, Cuban traditions and Dominican inspiration. Gonzalez said that his personal favorite is the carne asada tacos, which start with juicy seasoned steak, and are loaded with onions, cilantro and lime.

The shrimp and chorizo tacos are a nod to a Californian signature dish, and Gonzalez said that they quickly established themselves as a fan favorite. Although the menu is full of steak, chicken, fish and pork meals, those who prefer to eat meatless can find a flavorful Impossible taco layered with cheese, peppers, onions and cilantro.

Many patrons continue to ask for their own traditional favorites, inspiring Gonzalez to start running weekly specials, incorporating more cultures and traditions on the menu.

“I’ve got big plans,” Gonzalez said about the future. To increase the capability to accept phone and takeout orders, he plans to utilize the space on the west side of the property to put up an auxiliary kitchen, to be used exclusively for to-go, pickup and delivery orders.

Pairing with this walk-up fast service aspect of the restaurant, Gonzalez designed an app set to hit the App Store midsummer, with which patrons can order custom tacos in minutes. He hopes to perfect the user experience with his own restaurant, and ultimately market it to other taco establishments.

Taco Borracho, headed by a do-it-all stalwart leader in Angel Gonzalez, is bringing tacos, margaritas and culture to Grand Rapids, and won’t be closing its doors again anytime soon.

“You learn who you are by listening to people. We know who we are now,” Gonzalez said. “We are so excited for what it’s going to be.”

Tweet
Published in Dining
More in this category: « Grove: Refreshed, Reimagined, Reopened
Login to post comments
back to top