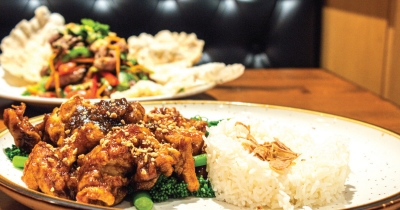 Vietnamese cuisine with midwestern hospitality is what Phong Nguyen, co-owner and executive chef of Monsoon Vietnamese Cuisine, is whipping up at his brand-new restaurant in downtown Grand Rapids.

“I’ve always had a dream of opening a Vietnamese restaurant,” Nguyen told Revue. When he first came to America in 2012, he was inspired by a portrait of a Vietnamese lady that was hung in a fine dining restaurant he entered. “She was wearing western clothes, but still had the Asian look. It was beautiful.”

That marriage of Vietnamese traditions and culture with the Midwest was the forefront of Nguyen’s concept for his already-thriving restaurant. After cooking in many well-known restaurants around Grand Rapids, the former business and marketing student joined forces with three investors to make his dream a reality.

He hired a Vietnamese architecture firm to design the sleek and creative interior, which includes a brand-new bar, booths, rattan lighting fixtures and wall decorations from Vietnam.

Above the bar, a neon sign bears the name and logo of the restaurant, which was inspired by a metaphorical perspective on the heavy weather conditions it takes as a namesake.

“In Vietnam, when the monsoons happen, it’s pouring with rain and flooding everywhere,” said Nguyen. “It reminds me of the struggle we had during the difficult times of COVID.”

Despite delays in production, location choices and other setbacks, Monsoon Vietnamese Cuisine has weathered the storm, and emerged triumphant from the figurative pandemic “monsoon.”

“Vietnamese fine casual dining adds a lot of diversity for the city,” Nguyen said, noting that among the many burgers, tacos and other types of restaurants Grand Rapids is rife with, fine Vietnamese dining is few and far between.

One of Nguyen’s main focuses with his restaurant is the way in which every aspect of the experience comes together, and no element is subpar. One of the main ways he manifested that was by knocking down the walls that blocked the kitchen off from the dining area.

“I’ve always loved an open kitchen, because I used to be a private chef,” Nguyen said. “People love the experience of having a chef to talk to and see how the food is prepared.”

While the chefs at Monsoon aren’t within talking distance of tables, the open kitchen allows patrons to see the food and the process, while the smells waft to hungry, anticipating tables. In the future, Nguyen hopes to develop multiple-course meals to be enjoyed from the chef’s table, a high-top table that faces the kitchen.

Also visible in the open kitchen is the charcoal grill, which provides Monsoon’s signature flavor, not found in many restaurants in the area.

“In Vietnam, we use charcoal a lot in the food we prepare on the street or at home,” Nguyen said. Because the authentic flavors are so important, he said the splurge for the grill was worth it, with no doubt. “That’s real flavor, you can’t change that.

When developing the menu, Nguyen drew from the most popular items he found in his private chef career. Adding new large-scale favorites and creating some new ones, he streamlined the menu to include the most high-quality, authentic dishes.

Food isn’t the only thing Nguyen values, though.

“Good food is always there, but the ambience and the servers are just as important,” he said. Nguyen has gotten great feedback from patrons about the experience, from the staff to the atmosphere and design, as well as the food.

Just a few months into business, the reviews are great, the staff are well-trained, and the food is flavorful. The only thing left are the drinks. For now, the drink menu is comprised of flavorful mocktails, matcha and teas. Once the long-awaited liquor license clears, Nguyen said that he plans to have a full cocktail menu designed by one of his talented staff members, and draft beers from Vietnam.

Progressing into the fall and winter also presents new opportunities for Nguyen. He said they are already experimenting with new dishes for a seasonal winter menu, focusing on warmer profiles like braised meats, dumplings, and other belly-warming meals.

Provided no more figurative monsoons sweep the country, Monsoon Vietnamese Cuisine is making its presence known in Grand Rapids, bringing a new cultural dining experience to the scene, and is bound to become a downtown staple in no time.

Tweet
Published in Dining
More in this category: « Sweet Summer Treats Galleria: An Art Bistro of All Trades »
Login to post comments
back to top