JungleBird: A Slice of Paradise 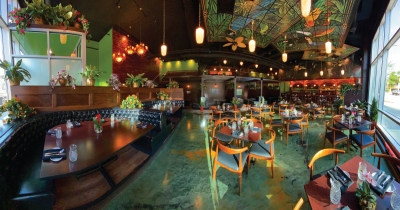 In the heart of Kalamazoo, right on the bustling Michigan Avenue, you can escape to the tropics. Even in the dead of winter, it’s always sunny in JungleBird.

A few years ago, the building’s owner approached Mark Sellers to see if he’d be willing to provide their ground floor space with an exciting new restaurant. Having seen recent success with the two-story tiki wonderland in downtown Grand Rapids, Max’s South Seas Hideaway, Sellers was inspired to create another urban escape.

While the two are sort of sister restaurants, they’re far from identical experiences. Max’s is a windowless oasis “bathed in perpetual twilight” and filled with hundreds of tiki carvings, mugs and a massive aquarium. JungleBird, meanwhile, has huge floor-to-ceiling windows bathing the space in light, alongside beautiful tropical art featuring a variety of tropical birds.

An upper mezzanine with about 50 seats overlooks the main dining space, and a side bar called the Miami Room provides a unique, separate experience. Each space has its own bar, giving you three different spots to saddle up for a drink. Overall, the space seats around 225. It’s a tropical vibe, kept warm year-round, not to mention “warm colors and warm people,” Sellers told Revue.

As he created the general concept, Sellers drew on his many travels to the Caribbean and Miami. Much of the inspiration comes from Cuba, one of his favorite destinations of all-time. Sellers has had incredible experiences there, such as being led by a young local who barely spoke English to a concert held by the renowned Buena Vista Social Club in an area largely ignored by tourists. When he arrived, the band was playing right on the floor, mere feet away from the audience. Now, of course, Buena Vista Social Club is part of JungleBird’s tropical soundtrack, alongside all kinds of Latin jazz, Spanish music, Son Cubano and much more.

While Max’s is known for dozens of tiki drinks, JungleBird again leans toward South America. For instance, check out Caipirinha, “Brazil’s national cocktail,” with cachaca (a spirit made from sugarcane juice), sugar, and lots of fresh lime. Or go for the Michigan Ave Cubanita, which is essentially a Bloody Mary made with rum—it comes highly recommended by Sellers.

JungleBird’s name comes from a famous, yet classic tiki cocktail, also on their menu. The namesake drink features Jamaican rum, pineapple, lime, and Campari (the signature ingredient of negronis).

Despite nearly a year of delays involving supply chain issues, kitchen equipment, staffing and a certain pandemic, JungleBird has arrived on the scene. Whether you want a quick tropical cocktail and croquettes or a full Caribbean dining experience, this is your new, warm, urban oasis in Kalamazoo.

Tweet
Published in Dining
More in this category: « Getting the Royals Treatment Black Napkin: Full of Flavor and Funky Infusions »
Login to post comments
back to top