APPLESHINE
Flat Lander’s Barstillery, 855 Michigan St. NE, Grand Rapids
It’s a slow dance of premium white whiskey mixed with Michigan apple cider and other secret ingredients topped with house-made bitters and a kiss of cinnamon. In the fall and winter, the drink can also be served warm and goes by the name of Hottieshine with whipped cream on top. It’s like apple pie in a glass or like lightning to your system. Served in a mason jar, this stuff is smooth like forget-your-name-and-what-day-it-is kind of happy. “It’s an all-year-round, perfect blend of everything drink,” said Flat Lander’s owner Robert Grimes.

SMOKED SAZERAC
Principle Food & Drink, 230 South Kalamazoo Mall, Kalamazoo
“It’s a take on the New Orleans classic that’s moody and darker,” said Casey Longton, operations manager and owner of Principle Food & Drink. “(Its) dried star anise smoke took us exactly where we wanted to be.” While the chilled cocktail infuses with the smoke in a decanter, the guest is presented with a glass containing a large ice cube misted with Pernod and a lemon peel. When the drink is ready, the guest pours it themselves, creating a multi-sensory experience. The mix of American rye whiskey, Demerara syrup and Peychaud’s bitters offers up spice qualities, a rich molasses earthiness and an herbaceousness you won’t forget. Why does that description sound like someone’s Tindr profile? Either way, it’s one to try — the drink I mean… 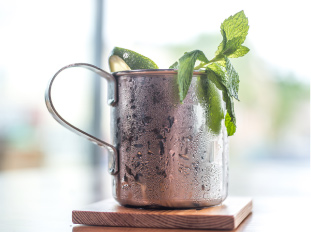 POLISH FALCON
Long Road Distillers, 537 Leonard St. NW, Grand Rapids
Take a swig of West Side history right here. This falcon comes served in a tin cup and features vodka that’s fermented and distilled from 100-percent Michigan Red Winter Wheat from Heffron Farms in Belding. It creates a smooth, sweet flavor with hints of vanilla. They add in lime and to-die-for ginger beer that’s “sweet and citrusy with a bold ginger bite,” said owner Jon O’Connor. I’m one to play favorites so I’d put this one on repeat all night. It’s what hard work tastes like and I give it my official “Polish Girl Seal of Approval” (for whatever that’s worth).

OBSIDIAN
Sidebar, 80 Ottawa, Grand Rapids
Barkeep Andy Szumowski sums up this drink in one word: Brooding. “We are Beer City and we love our bitter IPAs but cocktails can stop being totally sweet these days,” he said. “It’s nice to highlight the bitter and earthy flavors of this drink.” The Obsidian requires only four ingredients. It’s a stormy mix of Reposado Tequila with Cynar (Italian artichoke liqueur) and Amontillado sherry and cream sherry. It’s sort of jet black in color and served with a huge shard of ice resembling an obsidian rock. “The drink ends up smelling like a bitter, dark chocolate bar,” Szumowski said. With oaky, nutty and bitter flavors, this imposing concoction was born out of a bartender challenge. “We go off the menu all the time,” Szumowski added. It’s definitely moody and silky smooth and, in the glass, it’s pretty.

BABETTE’S FEAST
Reserve, 201 Monroe Ave. NW, Grand Rapids
Here’s where an appreciation for sherry results in a drink. It’s a true story and it comes from Rob Hanks, bar manager and vice president of the Grand Rapids Cocktail Guild. He’s proud of this cocktail made with brandy, bourbon, Amontillado sherry, shagbark hickory syrup and barrel-aged bitters. Fall-inspired and with deep, woodsy and spicy flavors, this spirit was born of Hanks’ love for sherry and to “try and figure out how to make people drink more sherry. It’s a big thing in the cocktail world right now,” he said. Sherry is the perfect way to balance drinks. It adds more acidity to balance out the sugar component without using lemon or limejuices. Sherry offers the same effect without diluting the drink. “It’s a riff on a Manhattan with darker, barrel-aged flavors but with a mid-palate brightness that shines through with a nutty flavor,” Hanks said. You’d like this beverage following Thanksgiving because “sometimes people need a stiff drink after family,” he added.

AUTUMN PUNCH
Grove, 919 Cherry St. SE, Grand Rapids
Yeah, you read that correctly and it does sound like an intense creation. Milk punch is a blend of liquor and dairy dating back to the 1700s. It takes three days to make and has flavors from pears, maple syrup, chai tea, cinnamon, clove and coriander. “It has a great texture to it,” said Grove’s bartender and server Nate Cohn. “It tastes creamy but it’s not creamy. It’s a really nice fall punch with a ton of booze and you wouldn’t even know there’s dairy in it.” Cohn is actually working on a non-dairy version, too. The punch has a silky consistency that doesn’t weigh you down but is sunny enough to compare it to crisp and glowing autumn days and the color changes taking place outdoors. “It’s a great treat and a rare thing to see on a menu,” Cohn said. And hey, with Cohn serving up drinks, you’ll want to sit at the bar and hear the story of how drinks came to fruition. “There’s such history behind every bar with the rum, bourbon, absinthe and bitters — every bottle has a story,” he said.

Tweet
Published in Libations
More in this category: « Pair a Hands-On Cocktail Class with a Film Screening Last Call: The Limonana at San Chez Bistro »
Login to post comments
back to top