Brew News: Breweries that have opened or closed in the past year 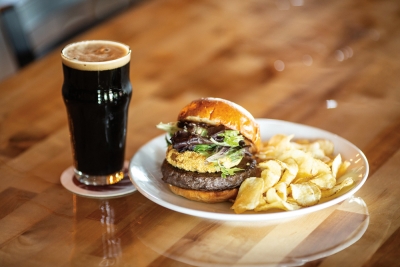 You might notice that new breweries aren’t arriving at quite the same rate as they used to. Does that mean that the infamous Beer Bubble has finally “popped?” We don’t think so — West Michigan still has far more breweries opening than closing. If you take a look at our brewery guide, you’ll notice quite a few breweries that expanded in a major way.

Being a newcomer may be harder than it was five years ago, but plenty of people are still making it happen. Here’s a look at breweries that opened in the past 12 months, as well as a couple that sadly closed up shop.

The year kicked off with Guardian Brewing Co. opening its doors at 657 63rd St. in Saugatuck. The women-owned, pegacorn-loving brewery has a huge range of in-house beers, such as the Nahual Coffee Pale, Mico Medio Chile Beer, Golden Phoenix IPA, and many more. There’s also lots of wine, cocktails and even beertails made with Guardian’s own brews. The brewery occupies the former Red Barn Theater and features an internationally inspired seasonal food menu. Of course, they also plan to offer yurt rentals.

In February, Liquid Note Brewing opened a new brewpub joining Arpeggio, a music venue in downtown Otsego. Located about 2.5 miles west of U.S. 131 on M-89 west of Plainwell, Liquid Note aims to bring “musically infused brews” to the wilds of Allegan County, as well as offer guest taps and a full bar for its many concerts and comedy shows. The brewpub is filling up more of its taplines by the day, with more than a dozen of its own beers pouring now. Check out the Vulgar Display of Porter, or the Psychedelic Haze NEIPA.

Harbor Light Brewery in South Haven is the culmination of at least 30 years of hopes and dreams. Brewer Bill Simaz was probably one of the first homebrewers in West Michigan, making craft beer since 1989. That’s a lot of time to learn how to brew top-notch beer. In fact, his stouts made a believer of co-owner Tom Feeney and his wife, which is why Simaz and Feeney decided to open Harbor Light together. The brewery is located at 516 Phoenix St. and celebrates the city’s nautical heritage with around 20 beverages on tap.

Schaendorf Brewing Co. (420 Water St., Allegan) opened just about a year ago with full dinner service and beer from various Michigan breweries. Recently, Schaendorf expanded to provide room for a production space to brew its own beer — once the brewery license actually goes through — as well as a larger kitchen and taproom. Schaendorf has already established itself as a neighborhood restaurant with an impressive food menu that includes burgers, steaks, sandwiches and other entrees.

Alebird Taphouse & Brewery arrived in Byron Center at 2619 84th St. SW. The new restaurant and brewpub has made a name for itself with bold food, a large tap list and some cocktails. Alebird has plenty of its own beers alongside a healthy selection from other breweries across the nation to supplement. The brewery likes to shake it up with collaborations, beer floats, yoga events and more, not to mention an excellent, widely varied food menu.

Just over a year ago, Waypost Brewing Co. joined the ranks of Fennville at 1630 Blue Star Highway. Founded by a brewer and winemaker, the small brewery is based on a farm, which provides some of the beer’s ingredients, much like a winery. The beer makes frequent use of farm-fresh ingredients, focusing on just making quality brews that speak for themselves.

Rake Beer Project finally arrived with a taproom mid-September, opening up at 794 Pine St., Muskegon. The brewery garnered a following for its “progressive” farmhouse ales before even opening the taproom. Go check out brews like the Bad Acid, a farmhouse with pineapple and mango, or the Marley Biere, a tart, rustic table beer soured with “live lactobacillus culture” and fermented with a “rustic Norwegian yeast strain.” Basically, it’s beer you won’t find anywhere else.

One of my former watering holes, Hideout Brewing Co., finally closed after years of some ownership changes and struggles. The offbeat and off-the-beaten-path brewery in Grand Rapids was tucked away at 3113 Plaza Dr. NE, with weird brews served up in a totally inviting atmosphere. In fact, my Christmas night tradition was to visit the Hideout and drink more beer than I should’ve with the same bartender every year, often staying until after the place “closed.” We will forever miss it, and would love for someone to take over the space and provide something similar.

More recently, Boatyard Brewing Co. decided to close up shop out in Kalamazoo. The owners cited economic reasons and said that the decision to end Boatyard’s run came with “heavy hearts,” and they thanked the community for welcoming and supporting them. The brewery had solid beer, a welcoming vibe, a nice interior, and some events — it will be missed.

Arcadia Brewing Co. in Kalamazoo has halted operations. We’re not sure yet if that means the brewery is closing for good or will just have to find a new spot, and we’re not ones to speculate. What we do know is that Grand Woods Lounge of Grand Rapids will be moving into the building with a second location. It should be quite the change, as Grand Woods’ original location is more known for weekend parties than craft brews.

Tweet
Published in Libations
More in this category: « Beer Beyond Boundaries: Revue visits some breweries in Grand Rapids’ perimeter Pint-sized Pioneers: Arvon Brewing Company finds a home to welcome the next wave of haze »
Login to post comments
back to top