Pint-sized Pioneers: Arvon Brewing Company finds a home to welcome the next wave of haze 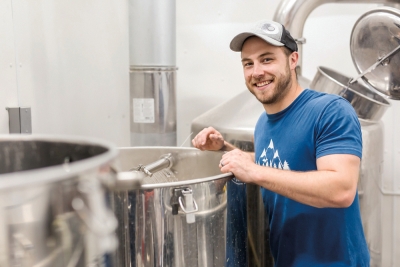 When a brewery’s maximum occupancy caps at eight, it doesn’t take a mathematician to calculate that said brewery can’t sell a lot of pints. Since opening in 2017, Arvon Brewing Co. has occupied a hidey-hole in Grandville roughly the size of a storage locker. Like playing pool while your cue bangs against the wall, I can only imagine the frustrations owners Jake Stanko and Brett Bristol have experienced while raking spent grain from their fermenters.

Still, they say good things come in small packages. I recently cracked open a can of Arvon’s Jurassic Haze — a NEIPA generously hopped with Vic Secret, Citra and El Dorado — and indeed, the proof was in the pudding. Turbid as a bog and fragrant as a fruit basket, it tasted like Haze 2.0. Unlike some hazies that verge on the feverishly sweet, Jurassic Haze emphasizes bitter first, citrus second.

I was prepared to swipe the whole stock from Siciliano’s but the public beat me to it. Despite their size, Arvon has amassed a cult following that regularly drains supply upon can releases. Stanko loves that people love his beer, but he never wanted to make it a wild goose chase to find some.

“We don’t want to be known as the brewery whose beer is impossible to get just because of the size,” Stanko said. “If people want to drink our beer, we want to make it available.”

With their 3-barrel system already brewing double batches on overtime, the only answer was to find a bigger boat.

To Beer City’s boon, Arvon and crew announced last month that they found a new home on Division between Franklin and Hall streets and — barring any hiccups — they should start pouring beer by the end of the year. The building looks modern and clean, like a milk carton designed by Herman Miller, and though the guts need some TLC before they’re photogenic, Stanko promised an open and spacious vibe with 12 draft lines out the gate. Outdoor igloos were even mentioned as a possibility once the budget gets ironed out.

For those trying to place the location, if you jump on Google Street View at 1006 S. Division Ave., it might seem like an odd side of town to plop a brewery. Though you may spot it on a trip to Taqueria San Jose, it’s a bit outside the main drag’s activity, so there’s no chance you’d stumble upon it on a walking tour. The lack of surrounding development isn’t lost on Stanko.

“We’re excited about being some of the first ones in,” he said. “We’re going to try and get with the community to team up with local vendors and food trucks. Hopefully, we’ll bring people in to spend money in the area.”

Judging from the quality of their beer, I’d wager Arvon will have plenty of draw for the craft beer fanatic. Last year at 7 Monks’ annual Grand Rapids IPA Challenge, Jurassic Haze took top honors, besting competition that included Founders and Brewery Vivant. Their IPAs are no slouch and that’s a credit to Stanko’s passion and understanding of hops.

“I like how useful hops are in changing flavor profile. There are so many out there and they’re constantly inventing new ones,” Stanko said. “A single hop could taste severely different depending on how and when you use it in the process, or even where you get that hop from.”

Look to Arvon’s Lighthouse series for a tasteable demonstration of this idea. Each of these IPAs are hopped with a single varietal, “displaying the unique character of the hops as a shining beacon.”

We’ve touched a lot on hops, but don’t mistake Stanko for a one-dimensional brewer. With an upgraded facility, the opportunity to experiment with styles that take longer to ferment excites him the most. While Arvon has found success with lagering and kettle sours, I’m drooling at the thought of what Stanko could do with some bourbon barrels or a foeder.

Another opportunity the new brewery should afford Stanko: a healthier work/life balance.

“I’m a brewer second and a family man and a dad first,” he said.

To understand Arvon fully is to appreciate Stanko’s family tree. His wife, Abby, works sales and logistics; his sister (who is Bristol’s wife!) handles marketing and social media; and his dad operates as a part owner and consultant for business decisions and strategies. They even have mom doing merch. It’s heartening to see a family bond over beer and a shared vision of revitalizing a community.

With all hands on deck, a portfolio of killer recipes and some shiny new digs, all signs point to Arvon as the West Michigan brewery to watch in 2020.

Tweet
Published in Libations
More in this category: « Brew News: Breweries that have opened or closed in the past year Brewery Blunders: Five of the worst beer trends of 2019 »
Login to post comments
back to top