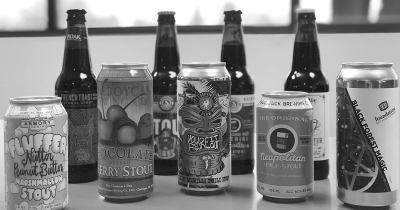 More often than not, I eat dessert in shame — a scoop of mint chip in private, a doughnut in the crawl space while the beady eyes of rats illuminate the glaze upon my face. Sugar is the devil I cannot deny, but thanks to pastry stouts, I can come out of my cave to drink sweets amongst the normal people.

A pastry stout is a made-up thing. Somebody put cake batter inside a stout one time and journalists called it a “movement.” Folks took note, and now everybody wants one. The defining ingredients are adjuncts (sources of fermentable sugars) like cookies, pie, goody gum drops, Cap’n Crunch, who cares. The more outrageous, the better.

Some brewers deride these confections as stones thrown at the altar of “Proper Beer.” I’d like to remind them of the time they got piss drunk on pilsner and inhaled a sleeve of Twinkies. Don’t forget, we’re drinking alcohol here, not clarified holy water. Bad decisions are part of the fun.

And so we went ahead and tried a bunch of these. Unlike other Revue tastings, we chose not to go it blind. All our selections (barring one exception) use such distinctly different adjuncts, it’d be impossible to grade them on an even plane. That said, we quieted our biases toward specific flavors (curse you peanut butter haters) and attempted to meet each beer on its own terms. Some satisfied the sweet tooth, others gave us cavities. If any of these intrigue you, buy a single and see how it stacks up against our scores.

More than the rest, BA Neapolitan sticks to the premise of its name. The trio of flavors don’t vie for attention but rather luxuriate together in the hot tub that is your mouth. It’s even better than a cone of the stuff, and hey, this one makes you feel funny. Macerated strawberry hits the nose, chocolate lingers about the tongue, and vanilla says hello as the sip rolls away. The barrel-aging — big ol’ bourbon — is the coup de grâce, adding a depth of char and molasses. This is without a doubt our desert island dessert beer.

Bacon, bourbon, coffee, maple syrup, rye: Rye Hipster Brunch Stout’s moving parts are a chainsaw juggling act — fall off-balance and there goes an appendage. Fortunately, there is harmony in the preponderance of everything. I think the pig is the secret weapon. One panelist noted the aroma was like “bacon on the stove at your neighbor’s place.” It would pair nicely with a short stack, a couple over easy eggs, and an afternoon of nothing to do.

Maybe double dipping in the Neapolitan bucket was unfair, but the first scoop was so good we needed a second. For Saugatuck’s flagship Neapolitan, there’s the same ice cream conceit, albeit in sessionable, canned form. Here, chocolate takes center stage while you have to tease out vanilla and strawberry with a couple tastes. Delicious, yes, but the mouthfeel was a bit limp and a strange acidity kept us from screaming for this ice cream.

It tastes exactly like those Eggo French Toast Sticks you’d eat while watching Saturday morning cartoons in your Teenage Mutant Ninja
Turtle matching pajama top and bottoms. One of our reviewers who tanked the score evidently did not share this childhood memory. The maple syrup plays well with the oatmeal stout’s base that’s burly enough to keep the sweetness from becoming sickly. Kind of a harsh aftertaste though.

Peanut butter and marshmallow fluff: the pinnacle of the food pyramid. This riff on Grand Armory’s Nutter Your Business ups the ooey gooey with a decadent, nutty stout that drips with melted chocolate. It’s solid, but we docked it some points for the lack of marshmallow flavor. We detected a hint of toasted mallow on the nose but when you line your can with the puffs, you ought to make them more apparent.

Maine and Michigan meet in the middle with this crack at replicating a classic pastry. A whimper of dark chocolate arrives first and then wham! Cherry juice smacks you in the uvula. It’s not exactly pleasant; more like “a cup of juice someone forgot about,” as one taster remarked. And ultimately, does this even taste like Black Forest Cake? Maybe after dropping a tab of acid.

You Figure it Out
Griffin Claw Brewing Company, Birmingham
6% ABV

Tweet
Published in Libations
More in this category: « Drink Your Sweets Revue's Guide to Beer Month 2020 »
Login to post comments
back to top