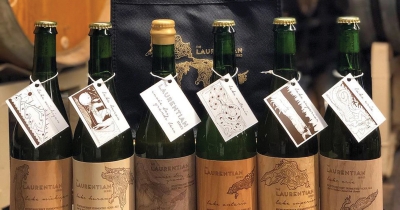 The defining qualities of a concept album aren’t always clear, but you know it when you see it. From Neutral Milk Hotel’s cryptic Anne Frank tribute, In the Aeroplane Over the Sea, to Green Day’s more obvious Bush-era takedown, American Idiot, the songs on a concept album serve a broader purpose, encouraging full album plays rather than song skipping. When executed right, fans end up chewing on themes for decades.

Through less conventional means, brewers are dipping their toes into conceptual storytelling with beer series that follow narrative arcs and culminate in meaningful ways. Inspired by poetry, science fiction, and even holy sequences of numbers, these Michigan beer series prove that flavor can illustrate concepts as seriously as those other mediums you studied in college.

This Walt Whitman-inspired series from Bell’s might make you yawp, “O’ Captain! My Captain!”

In the same way Whitman’s rapturous verse experimented with form, Bell’s has used this series to indulge a wild side, too. Their first release in the lineup, Song of Myself, was a delicious paradox: a German-inspired American IPA. Whitman redrew the boundary between the self and the world, “For every atom belonging to me as good belongs to you.” In the same vein, this beer shreds beer’s style guide to converge opposing beer philosophies.

And while the style remains TBA, my sour sense predicts the sixth entry in the series — May’s Spontaneous Me — will wow drinkers with a mixed-culture masterpiece. Whatever it be, I imagine Whitman would smile to see folks embracing his writing and getting tanked in his honor.

This isn’t the first time Bell’s has been inspired by artistic flights of fancy. Look to the Planet Series for that, Bell’s seven-beer response to Gustav Holst’s musical composition, The Planets. The brewery’s soft spot for early 20th century vanguards has snuck high art into our craft beer conversations. Should we expect a Pablo Picasso beer festival next?

This craft beer space odyssey has a depth of lore so deep, one taproom couldn’t contain it. It began with a planetary seed, JUS, a hazy double IPA from Vivant, that set the stage for Vim’s fiction to grow. To hear Jonathan Ward, creative director at Broad Leaf, describe it is to enter the mind of Spaceman Spiff.

“We followed JUS with Secret Rituals, then Neon Immersion. These spoke to a sort of cosmic preparation and light bathing. It was a biodynamic and preparatory phase,” Ward said. “Then, in August of 2017 we released Dawn of Vim. The actual awakening of this Planet we called Vim. A planet of energy, but also the potential for mischief ... for adventure.”

The concept exploded with tales of spores, gametes and cellular reproduction — heady stuff for beer literature — serializing releases like new comic book issues. Vivant refreshed the series at Broad Leaf to evolve beyond IPAs into unique sours, fruited beers, and other mysteries.

“The story of Vim is still spreading, new chapters to be told,” Ward said. In a crowded sea of beer, Vivant/Broad Leaf’s rises above the pack by taking things extrasolar.

Speciation Artisan Ales figured out a way to taste the lake without sticking a straw in it. By open fermenting separate batches near the five Great Lakes, they inoculated wort with yeast native to each area and created what I’ll call “sour impressions” of these bodies of water. Co-owner Mitch Ermatinger shared his love for the series, “All our malt and hops came from Michigan for these beers, and obviously all the yeast did as well,” Ermatinger said. “It’s a really special opportunity to showcase what the state has to offer ... microbially!”

Each Lake beer is essentially bottled time and place, but the coup? A master blend combines liquid from all batches, inciting an age-old brewing practice: the art of the gueuze.

As stewards of Earth’s largest freshwater source, these beers tell us Michiganders a story. Our childhoods, livelihoods and futures are profoundly connected to our Great Lakes. Could there be a more romantic way of consummating with our natural resource than by consuming it — becoming one? More importantly, would you want to sip Lake Erie any other way?

A pinecone, the high and low tides, our very galaxy — the Fibonacci Sequence reveals itself in all of nature’s design. And now, in beer!

When City Built conceived this experiment on how brew times affect beer, their mash periods — 3 hour, 5 hour, 13 hour and 21 hour — happened to overlay perfectly with the sequence. The serendipity was too good not to indulge with backstory and packaging that showcases the fingerprint of God.

This collection of stouts promises to gift pastry stout aficionados super boozy, heavily adjuncted beers. 5 Hour Stout, with coconut and vanilla, clocks in at 13.5% ABV, and 21 Hour tips the scales at 19% ABV. I’ve also heard rumor that barrel-aged versions of these might appear down the line. Trust in the sequence. It’s never been wrong before.

Tweet
Published in Libations
More in this category: « Under the Dome: Where to Find Heated Huts in West Michigan Drinks Delivered: How to Get Alcohol On Your Front Porch »
Login to post comments
back to top