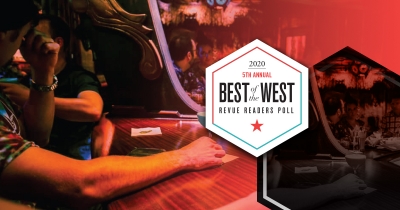 HAS OUR DRINKING SCENE REACHED AN EQUILIBRIUM? ARE WE DOOMED TO GLUE OUR WINNERS ON THEIR PODIUMS AND BOW TO THEIR PERENNIAL, UNIMPEACHABLE REIGNS?

I don’t know, but these polls sure seem to say so!

This year we saw no new nominees in the Craft Lager, IPA, Distillery, Cidery, Bourbon and Winery top three. Long Road and Eastern Kille continue to duke it out for top spirit honors. Vander Mill has the cider market cornered. Bell’s Two Hearted is arguably more popular than water. Oh, well. I suppose there are worse fates than watching these incredible beverage producers continue to kill it year after year.

Still, we need to talk about the brewing colossus that casts a shadow over this poll. Like Hershey, Pennsylvania, the city run by chocolatiers, let’s just get it over with and rename Grand Rapids as Founders, Michigan. The brewery’s presence was felt in literally every section it could compete in. I get it: All Day IPA is the cat’s pajamas — but it’s an easy choice. Next time, let’s show the little guys a little more love.

Rockford certainly knows how to go buckwild for this polling process. Not to knock Rockford Brewing Company — their Cactus Pear Weisse would be my desert island sipper — but Sheehan’s Irish Stout dethroning CBS is a curveball. Elsewhere, Rockford’s new Third Nature Brewing took home the Best New Brewery award and third place in German Beer with El Hefe; no small peanuts when matched up against the likes of Cedar Springs Brewing Company. I guess all this goes to show: Voter turnout creates results.

As for shake ups, the Sour Beer category did see some activity. After having two beers place in 2019’s top three, Jolly Pumpkin left without any medals this year, which is a bummer but not altogether surprising. With eight locations and more than 15 years in the biz, the public has averted its gaze to newer, shinier objects — like Brewery Vivant’s Blood Orange & Cranberry Sour, which is most definitely awesome.

I have one last personal bone to pick.

Anybody who didn’t put Speciation Artisan Ales in the top spot for best brewery/winery/seltzery, you have made a grave mistake. Every month, Mitch and Whitney Ermatinger and their team consistently release the best liquid in West Michigan — scratch that, in the world! — and I will evangelize their beer until their sours corrode my last taste bud. Once the new taproom opens up on Wealthy Street, give them all your money and we’ll call this whole poll situation good.

Historically, wax and wings are an ill-fated pair: Remember poor Icarus dropping like a sack of potatoes from the sky? Wax Wings Brewing Company seeks a different mythology. This small Kalamazoo brewery is making big waves, proving themselves masters of the hype beers; i.e., pastry stouts, hazy IPAs and fruited sours. The Condor Valley Brunch for example — a sour with blueberry, tangerine, waffles, maple syrup and vanilla — is an outlandishly delicious experiment. Sometimes you need to fly close to the sun to push the boundaries of what’s possible.

One of the many COVID-19 tragedies was Max’s being forced to close mid-winter, when we needed it most. This downtown oasis is pure magic, in large part thanks to the amazing tiki cocktails served in fantastical tiki mugs. Rum, pineapple, citrus and pineapple abound in these drinks created by mixologist Martin Cate. They’re complex and fruity without being loaded with syrup or sugar, finding a perfect balance between sweet, tart, and boozy. And now, a selection of the cocktails are available to go!

Virtue is great at making approachable ciders for the casual drinker who wants to sip all day without getting a stomachache. And while I love the canned choices like Virtue’s Rose and Brut, some of their best ciders are in bottles, such as The Mitten. It’s a bourbon barrel-aged cider, adding a richness to the sweetness in the form of vanilla, caramel and oak flavors. Made with both last season’s juice and this year’s, it’s a beautiful blend of the old and new.

Tweet
Published in Libations
More in this category: « Drinks Delivered: How to Get Alcohol On Your Front Porch BOTW 2020: Nightlife & Activities »
Login to post comments
back to top