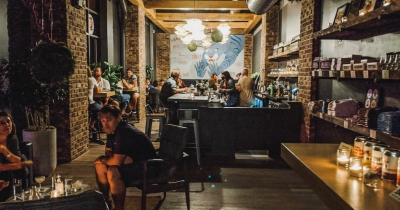 As of this month, West Michigan is one distillery richer.

Two James Spirits was finally able to open its Grand Rapids tasting room, despite the pandemic halting things for months. The Detroit-based distillery has had its eye on Grand Rapids for some time, according to owner David Landrum. He says they were originally looking at Bridge Street years ago, but Rapidian Chris Muller connected them with 7 Monks Taproom on Michigan.

Now, Two James shares a breezeway with 7 Monks, with a great, long indoor bar space and outdoor patio seating on the sidewalk. They’re still working on getting a sign up, so don’t be confused!

The tasting room has no food, but you can order from 7 Monks or bring in food from anywhere else. In the future, there may be early morning happy hour food, for the third-shift hospital and manufacturing workers as well.

Of course, the star of the show is the spirits. Two James has 13 different products, and only a couple of them aren’t technically made by the distillery, for various reasons — Mezcal must be made in Mexico, sugarcane doesn’t grow locally for rum. Everything else is made with local agriculture, working with Wing Farms in Ann Arbor.

“They grow all of our grain to spec. So we actually go out in our field, plant the stuff with them, and there’s an heirloom variety of rye. We’re really trying to showcase Michigan agriculture. This is what grain from Michigan tastes like,” Landrum said. “We’re really trying to drive home a seed-to-glass experience.”

Coming off 14 years of being a sommelier, Landrum has a taste for terroir. That palate helps Two James’ cocktails as well, which are really meant to showcase their unique spirits, like J. Riddle Peated Bourbon, a corn and Scottish barley whiskey aged in oak.

“When we started doing this, we tried to craft spirits that were really great for use in cocktails,” Landrum said. “We have some of the most unique, creative cocktails you’ll find at any bar and we’re only using our products. It’s really cool to showcase what you can make with only a few different ingredients.”

If you’re wondering which spirit to try, Landrum has a few favorites, of course:

Two James is open now, and really wants to be a part of the community. So feel free to come on in and warm up with some whiskey, gin, or craft cocktails.

Tweet
Published in Libations
More in this category: « Cocktails On the Go AlePrize Brings Local Art and Brews Together »
Login to post comments
back to top