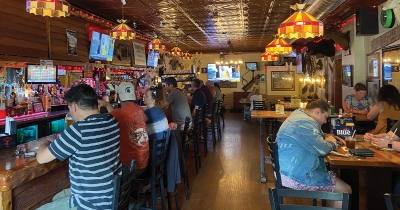 During the height of the pandemic, the last place you wanted to find yourself was in a windowless bar, shoulder to shoulder among strangers glugging domestics — that’s what we call “instant infection.” Unfortunately, this kind of environment is a dive bar’s bread and butter, so throughout the past year, our favorite pub owners were left without much to do but wait things out.

The dive bar’s absence left a hole in the world of watering holes, but now as vaccination rates rise and COVID cases fall, we can begin returning to the ways of the before times. I took to the streets with Revue’s managing editor Josh Veal, and we tore up the dives on Michigan Street and beyond.

We hit up old favorites and some hidden gems new to us. We learned not to mix Rumplemintz, Jager and Jameson in one night. Here’s what else we discovered along the way.

We arrived at Bob’s a little after 3 p.m. some Friday afternoon. We were ready to party but already late: Bob’s, like many bars lining Medical Mile, opens at 7 a.m. for those nurses who need a pint after a night of stitching people’s heads back together. During daylight hours, we found the scene in full swing as regulars and irregulars enjoy Bob’s food and spirits.

Bob’s has charm abound. The vibe might best be described as Chicago corner bar-esque — invisible to visitors but beloved by the neighborhood. From the custom stained glass above the bar to the man-cave wood paneling, it’s homey, and rightly so. I’m pretty sure the owner Bob lives upstairs.

While you’re there, drink your Bud Light, Miller Lite, whatever you have to, but do not leave without ordering a Chambong. This patented technology is essentially a champagne slip n’ slide with a shot of Chambord poured in for good measure. The meek suckle from the end like a pipe while the brave go bottoms up, funneling the contents directly into the belly. Let the buzz flow through you.

Between Bob’s, Birch and Duke’s, a dive bar Bermuda Triangle takes shape on Michigan St. Some claim their dignity was last spotted at Duke’s after slipping in a glop of Grand Coney remnants.

While Duke’s works for late night partying, Birch offers a more comforting drinking experience. Perhaps like myself, you also ended up there on Sundays for “Church at the Birch” where the sermon was always Bloody Marys and Taco Bar. Turns out, there’s fun to be had everyday of the week.

Birch’s happy hour is especially easy on the wallet, with food and drink starting at $1.99 among other pitcher and shot specials. We inhaled a couple fingers of Rumplemintz and needed some bar food posthaste. That came in the form of fries coated in cheese whiz and cheese-stuffed pretzel spheres that burst like Vesuvius when incisors made contact. Delish.

Many might recall when we nearly lost Birch after a kitchen fire scorched much of the innards. Thankfully, this bar thrives on resilience, and in 2018 Birch bounced back in full force after reconstruction. Great news for patrons who enjoy admiring taxidermy with a stiff drink in hand.

Now it was time for some real grub to ward off the day-drinking sleepies. The Elbow Room delivered in spades. I went for the Reuben while my comrade opted for a burger dubbed the “Garbage Burger,” which did indeed have a pile of toppings on it. Not sure why I expected less, but the mondo portions came in clutch. Wash it down with some White Claw and whabam! The party train chugs on.

Looking around, the place was packed with regulars, and it’s not hard to guess why. With a clean bar, solid staff and excellent specials, Elbow Room checks all the dive bar boxes without erring into scummy territory. And then there’s the Jagermeister dispensing machine, hypnotizing with its drip. Just one sip of the licorice goodness will keep you coming back for life.

Alright, nobody in their right mind would argue The Meanwhile is an actual dive bar, but if you squint, you can see some divey qualities. They have domestic cans, but they’re retro Black Labels. There’s a jukebox, but it’s filled with Smiths and Joy Division records. The bathroom is covered in graffiti, but it’s mostly haikus and koans. It’s dive bar simulacrum at its finest, but when I’m buzzed up, I can hardly tell the difference.

It’s a place of comfort, with a killer patio and some of the finest bartenders in town, and I’ll be damned if I don’t try to expose more people to its charms.

Entering Pickwick feels like tumbling into a fever dream. Outside, the sun could be screaming, but inside it’s perpetual dusk. The bar looks like it was airdropped from a 1940s saloon and it features the most bizarre three-draft lineup — Sierra Nevada Pale, Killian’s Irish Red and Fosters Lager. Individually, all solid beers, but together they read as a paean to lost lovers scattered across the globe.

Pickwick is definitely a bar lost from time, which only makes sense considering how long it’s been around. They’ve slung drinks — cash only — for more than 75 years, proving sometimes the simplest formulas work.

Between a stream of wisecracks, our bartender mentions he’s been at Pickwick for 30 years, but I think he may actually be a Genie trapped inside this metaphorical lamp. He has a twinkle of madness in his eye when he hands us the check. Someone please rub the building and set him free.

Tweet
Published in Libations
More in this category: « GR Bar Guide Raising the Bar »
Login to post comments
back to top