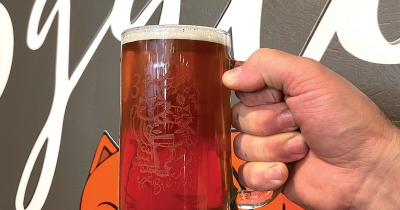 It’s the bar where everyone knows your name. No, it’s not Cheers. Instead, it’s 3 Gatos Brewery, the latest pub to hit the Wyoming neighborhood and named after the owner’s three tabby cats who have traveled with them from Brazil to Germany to West Michigan.

The journey hasn’t always been beer for Linus and Renata. Though they started home brewing in 2011, both worked for major OEM companies as engineers in Brazil and Germany. It wasn’t until Kitzingen offered a buy-out in 2019 that the couple began to pursue their dream.

“The moment I stepped out of the corporate world, I was already working in a small brewery in Germany,” said Linus. “In the meantime, we received the call from Kitzingen saying they were selling the business to retire. We traveled in February 2020, right before COVID, checked the place out, liked the Grand Rapids beer scene, went back to Germany, and said, “This sounds like a good deal. Let’s give it a try,” and that’s how it started.”

Like their own brewery, the beer community in West Michigan welcomed Linus and Renata with open arms. “The community has provided a ton of help by clarifying things we didn’t understand about regulations, pointing us to suppliers, etc. I can only say the best about the West Michigan beer community.”

Everyone is accepted the moment they walk through the door by the warm, neighborly environment of the brewery. The goal of 3 Gatos is to represent what craft beer means to Linus and Renata: diversity, openness, inclusion, and tolerance. Look outside and see friends safely gathered on the patio. Indoors, families play cards at tables while co-workers sip beer after a stressful day at work. Behind the bar, a smile is waiting for you with a delicious cold brew.

3 Gatos is the brewery you stop at on your way home from work when you crave a solid beer and a hot plate of food. “First, we are a neighborhood brewery which means we cater to people who live in a 2-3 mile radius,” said Linus. “We are not a destination brewery where someone is coming to us for the hyper-specialized style of beer. This is the end of the day for people to chill before going home.”

Though they may not specialize in a specific beer style, 3 Gatos has something on the menu for everyone. Linus and Renata brought their European history to West Michigan with classic beer menu staples like a strong malty Tripel and a delicious clove flavored, hazy, light-bodied Hefeweizen. “We focus on diversity. I don’t want to be specialized but instead offer a bit of everything, so people always have something they like on the menu,” said Linus.

“Classic beers, like an IPA or stout, are the styles I love. I started drinking American IPAs, which was my first passion, so I knew they would be on the menu. They pair well with our meat discus, especially the sandwiches. The bitterness and malt structure in the IPA goes well with roast beef, sausage, and mortadella.”

If you come for the beer, then you’ll stay for the food. Inspired by their Brazilian roots, the menu features a wide array of dishes from Pastel (deep-fried dumplings) to Bauru (roast beef sandwich) and your old standard, the American Burger. “About 80% of our appetizer menu is deep-friend because it pairs well with the beers with a touch of spice, like the Heiffwiezen or any Belgian beer,” said Linus.

3 Gatos is a highly personal project for both Linus and Renata. “The brewery is very personal and is about sharing who we are, where we come from, and the intimate things in our life. That’s why we don’t focus specifically on Brazilian or German. We add other things too, from the other places we like to visit, to create a unique experience for everyone’s taste.”

This hidden gem tucked away in the Wyoming neighborhood just might be the puuurfect spot for your next pint.

Tweet
Published in Libations
More in this category: « Drinking With Our Ancestors Drink With Your Eyes »
Login to post comments
back to top