Beers to Watch For 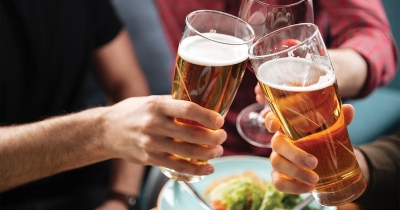 Fall is a time of change, and that means tons of new brews hitting the shelves. While we don’t have crystal ball big enough to see every exciting beer coming our way, we did ask a local breweries about great beers they have coming soon that you can find either in the taproom or at the store. Cheers!

We’re just about to release our Pro-Am beer, which is an Imperial Pilsner that we aged on wood staves. It should be on through October. It’s delicious, and has a wine grape nose — drinks really clean and you can almost get that barrel at the very end, and then it just dissipates. On November 1, we’re releasing a stout called Aztec Deathwhistle. It’s a big stout we’re gonna boil for six hours, that has chocolate, vanilla and cinnamon. So basically, like a Mexican cake or Mexican chocolate.

Broad Leaf just released a beer called Cosmic Question. We’ve given it the stylistic moniker of “intriguing ale” because it really doesn’t fit a style. Our head brewer at Broad Leaf, Terry Lancaster, had this to say about it: “A mysterious new beer style that poses vast cosmic questions! Hop mashing helps unleash the fruity thiols in the grain... expect a full-bodied malty fruit punch flavor rounded out with slight tartness.” It really is an exciting new beer that utilizes Cosmic Punch yeast, a new strain.

Vivant also just released a new beer called Brambles.  It’s a lactose IPA with blackberries that will see statewide distribution. The artwork for Brambles was done by local star artist Dayna Walton, a.k.a. Solstice Handmade. Both the label art and the beer itself turned out splendidly.

Obviously one of the things we look forward to each year is the release of our most sought-after beer: Wizard Burial Ground. In 2021, Wizard Day will take place on Thursday, November 18th. So fans can stock up on the 2021 vintage in time for the holidays — to either gift, drink, or cellar. This year, we hope to also release our second rum barrel-aged version of Wizard. The last one was a huge success, so we are very excited for the return of this variant!

We do have a new West Coast IPA in distribution: Something Hoppy IPA. Light-bodied, crisp, clear, and clean IPA with a pleasing bitterness/hop profile. It was originally a “house beer” made in collaboration with/and specifically for Pyramid Scheme music venue in Grand Rapids. Jeff VandenBerg (part owner of Meanwhile Bar and Pyramid Scheme) did the artwork for the tap handles and cans. It is in honor of local venues (and their staff) that have had such a hard time over the last 2 years. It was the venue’s beer exclusively for most of this year, but now we are distributing it on a wider scale/to the rest of the state.

We’re looking forward to the release of Bière de Luxe (5.0% ABV), a dry-hopped pils. Inspired by the French farmhouse brewing tradition, this golden lager is dry-hopped with Alsatian hops. Bright notes of ripe melon, lemon and cut grass. Like all our lagers, this one is unfiltered and naturally carbonated.

October’s release is Dragon’s Milk 2021 Reserve 3, a bourbon barrel-aged stout with Salted Caramel, 11% ABV. This final reserve of 2021 is an ode to one of our favorite releases. Aged for three months in select bourbon barrels, this mighty brew is finished with four different additions of caramel and topped with fine sea salt. Rich and indulgent, our latest legend is layered with sweet and salty flavors for a delicious beer best described as dessert in a glass.

Coming in November, Cabin Fever returns. This roasty brown ale is a hearty, comforting companion for long, mind-bending winters. It carves a path between spice, sweetness and nutty flavors.

We’re very excited to release our Tied Down To Michigan IPA in October! When it comes to Michigan, there ain’t no home like this one! This nicely balanced, seasonal IPA draws its rich hop aroma and flavor from locally sourced, all Michigan grown Centennial hops. Clocks at a nice 6.5% ABV.

Bell’s officially kicked off its rotating Wheat Series with Rind Over Matter (on store shelves now). This autumn wheat is a bright and refreshing American Wheat Ale, brewed with fresh lemon and orange zest, with a 5% ABV. It is easy-drinking, aromatic and has a lighter malt profile than Oberon that allows those citrus notes to really shine. Following that new release, we’ll see Bright White, a winter wheat, return in November. Looking even further ahead will be yet another brand new wheat offering, TBA.

Founders has announced the latest KBS flavor and barrel-aged beer: KBS Cinnamon Vanilla Cocoa. The sumptuous, deep coffee and chocolate flavors of KBS rise to the next level with a swirl of cinnamon and a hint of vanilla to create a sweet-but-not-too-sweet barrel-aged drinking experience. It’s a whole new spin on KBS that’s sure to sweeten spirits.

Time Reaper Imperial Stout (12.2% ABV) is triple-mashed and boiled for 24 hours, then laid to rest in bourbon barrels for 8 months. We had a limited run of bottles come to members in September, but we plan to release multiple variants in November as part of our Black Friday event. We’ve been meticulous with our time and ingredients in this beer, and we’re very excited for it to finally be ready for release!

Tweet
Published in Libations
More in this category: « Drink With Your Eyes Good Things in Small Packages »
Login to post comments
back to top