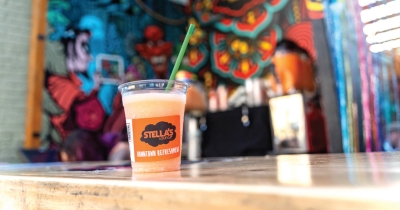 In September, GRBC opened the pours (forgive us) of its new mini-bar. It’s on Fulton, between Ionia and Van Andel Arena, and offers a limited food and drink menu.

Like many restaurants downtown, Grand Rapids Brewing Company relies in large part on income generated by attendees of concerts and other events, and of tourists. That income has diminished because of the pandemic; fewer events and fewer tourists had a serious impact on revenue.

Michele Ary, the company’s brand manager, said that over the last 18 months,the company took time “to look at what we do, why we do it, and how we could make it better for our community.” At the ribbon-cutting ceremony that took place on September 17th, members of the Grand Rapids Chamber of Commerce were invited to drink beer, eat thin-crust pizza, and celebrate the opening.

GRBC’s mini-bar joins others: Luna, O’Toole’s, Stella’s, Uccello’s, and Butcher’s Union have embraced this new model, providing offshoots of their existing restaurants. In Beer City, USA, you should be able to get beer anywhere, even while standing with your friends on sidewalk; now you can.

For some patrons, the mini-bar might become an entry-point: a chance to sample the wares of local restaurants. And for those who try GRBC’s mini-bar and want more, the restaurant itself awaits.

Man cannot live on beer alone, even here in Beer City, USA; thankfully, our best breweries put as much energy and attention into their food as they do their many, many IPAs.

Take Grand Rapids Brewing Company. On a recent evening, my wife, Shelby, and daughters Heidi (5) and Gemma (8), tried it out. The children, in a rare concession to the rule of law, drank no beer.

We started out with chopped steak rollers, a sodium-be-damned appetizer consisting of steak, cream cheese, black beans, corn, and jalapenos, stuffed into a tortilla and fried. They were good, and even better when dipped into an accompanying container of sriracha ranch.

Both children opted for chicken bites. Gemma had a side of fruit salad (thinly sliced pear, chunks of pineapple, and sliced grapes). Heidi had “dank” fries, minus the dank seasoning; several of the waffle-cut fries were bigger than her fist. I snagged one and found it serviceable, although I couldn’t help but wonder what the dank would have added — likely a lot!

GRBC offers three varieties of tacos wrapped in paratha, an Indian flatbread, which makes for a delicious wrap. I ordered the braised short rib tacos. The short ribs themselves were tender and delicious, and the caramelized onion, arugula, and queso fresco made for a rich, filling entrée. You get two, and, unless you’re Falstaff, two is plenty.

Shelby ordered the Seoul Fried Chicken. A crispy, moist chicken thigh had been slathered in gochujang glaze. I love gochujang, in all its earthy, spicy glory, and stole a bite; my wife, less impressed, calls it “mall chicken sauce.” We are still married. Slaw rounded out the sandwich, as did long, uncut scallions (they smelled of lemongrass, but weren’t). The brioche bun was soft and sweet, and barely contained the magnitude of the sandwich.

But this is, of course, a brewery. What of the beer? Nicodemus The Wise is a cucumber, juniper and lime lager. The lime could be smelled more easily than it could be tasted. “This tastes like flowers,” Shelby said, and she wasn’t wrong; it had a pleasantly refreshing quality. And even without the beer, we all had to be rolled to bed that evening.

Tweet
Published in Libations
More in this category: « Beers to Watch For Creston Brewery Returns »
Login to post comments
back to top