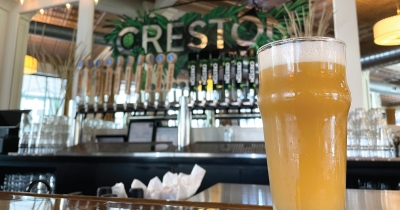 When Creston Brewery shut down in March of 2020, no one knew what would come next.

Many local businesses eventually came out with a plan and a path to survival, but for some — especially those already struggling — the pandemic was a death knell. Fans awaited any news that Creston Brewery, a local institution, would return. As someone who lives on the same street as the brewery, I was one of those fans.

Then, in September 2021, Saugatuck Brewing Company announced it would be taking over Creston Brewery and rebooting it as a sister brewery. This was great news for most, and not-so-great news for the cynics.

In the world of craft beer, there’s an incredible emphasis on standing up for the little guy and retaining ownership over a local business. In many cases, the community itself feels as though it owns part of the brewery, especially when the neighborhood’s name is right there: Creston Brewery. Saugatuck Brewing Company. Newaygo Brewing Company. In a way, these watering holes represent the communities in which they reside.

So while the concern is understandable, let’s clear up a few facts: There was simply no path for Creston to recover on its own. Without Saugatuck stepping in, the building could have gone to new owners with no intention of respecting the former space. It could be a chain restaurant, or an entirely new brewery, or a laundromat.

“We were excited to be in Grand Rapids, and super excited to keep something alive that obviously was a huge part of the neighborhood,” said Michael Biddick, who's managing the taproom, and is food and beverage director for Saugatuck, as well as sales director for Michigan and Ohio.. “So the fit for us made a total sense, because who knows what would happen if we didn’t come in? It could have been something completely different.”

Instead, in October, Creston Brewery reopened with the same name, same brewer, and much of the same staff. There were Saugatuck beers on tap and Creston brews on the way — it takes time to brew beer, after all. By the time you’re reading this, a majority of your Creston favorites will be on tap, all made by head brewer and former co-owner Scott Schultz. In other words: Don’t worry, the beers you know and love are back.

“If you’re an old fan, you still can get what you’re used to. If you’re a new fan or Saugatuck fan, you can now get exposed to both,” Biddick said.

Favorites like Bokonon IPA, GRale pale ale, and Michicalia gose are all on tap, ready for you to enjoy. Of course, if you’re a fan of Saugatuck’s Neapolitan Milk Stout, Bonfire Brown or Oval Beach Blonde, they have that too! Plus, wine, cider and cocktails will all be on the menu.

Much like the beer list, Creston’s food menu is sort of a blend of the old and the new. Led by Chef Michael, they’re aiming for, “Rustic, upscale, pub fair with some elevated weekend features.” Like most restaurants in the area, the menu is a bit limited to allow for a much smaller cooking crew to get food out in a reasonable time — staffing remains a huge hurdle.

Then there’s the Golden Age, the second-floor event space. Not too much has changed there, but the space is open and ready for your weddings, school reunions, business retreats — whatever you like. You can fit up to 270 people for a cocktail style event and up to 200 for a sit-down event.

Since reopening, Biddick said it’s evident every day how much Creston Brewery means to the community. Returning managers and employees are frequently running to the door to greet returning customers as friends. Even if everything had changed but the name and space, the people are really what make Creston what it is.

Going forward, the brewery is tiptoeing back into live music, trivia nights and other events. Plus, a mug club is coming that will encompass all three of Saugatuck’s locations.

Speaking of which, Saugatuck also just announced plans to use the space of another shuttered brewery: Olde Peninsula Brewpub in Kalamazoo. Saugatuck merged with Gonzo’s BiggDogg Brewing in 2019, renaming the brewery as well. Now, they’re moving downtown to fill the shoes of Olde Peninsula, which shut doors in July 2021.

Meanwhile, at Creston, expect to see the tap list and food menu continue to grow. Despite it all, they’re still here.

“Hey, we’re back,” Biddick said. “Saugatuck Brewing’s excited to be a part of this community. We’re excited to bring back Creston, revitalize it, and be here for the long run.”

Tweet
Published in Libations
More in this category: « Good Things in Small Packages
Login to post comments
back to top