Brewery Nyx: When Less Is More 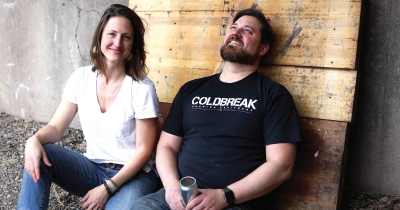 Brewery Nyx makes top-notch beer that has a full body, pours a nice head, and tastes delicious — it just happens to have no gluten.

There’s no way to talk about Grand Rapids’ latest brewery and what they do without discussing Nyx’s claim to fame: Michigan’s first dedicated gluten-free brewery and facility. But that doesn’t mean this beer is only for those with health conditions — I don’t even think about gluten, and yet I drank my way through 12 of Nyx’s pints faster than I’d care to admit.

When moving back to West Michigan from the west coast, co-founder Jessica Stricklen struggled to find the proper gluten-free brews she had become accustomed to in Portland. Many on the market are made with sorghum, which is fine for some drinkers, but results in that distinctive “gluten-free taste” many people want to avoid. Others are “crafted to remove gluten” after brewing, which isn’t quite the same either.

True gluten-free beer like Nyx’s is made with quality ingredients and “alternative” grains like rice and millet, along with a hefty dose of experimentation and trade secrets. The result? Time and again, people take that first sip, their eyes widen, and they say, “I can’t believe this is gluten-free.”

I had the same experience with all three of Nyx’s beers on shelves now: a Double IPA, a dark Stout, and a crisp Lager. Even more impressive, however, was how light and not bloated I felt compared to the typical craft beer. It’s a difference you won’t notice until you’ve experienced it. Stricklen said she’s seen the same thing happen with many friends and family.

“During this process, having friends and family try some of our beers and people who are like, ‘Oh, I don’t really drink craft beer anymore. It makes me feel terrible.’ And then they’ll try our beer,” Stricklen said. “First they’ll say, ‘This is gluten-free?’ And then a day or two later, they’ll reach out and say, ‘I felt fine after I drank your beer! I can drink beer again.’ And these aren’t even gluten-free people.

“Gluten is not a bad thing, for most people, but there’s a lot of gluten in beer. So to cut back in one way or another, it can open the world of craft beer back up.”

To make this all happen, Stricklen is working with brewer Sebastian Henao Van Bommel, former brewer at Thornapple Brewing. She describes as “a bit of a mad scientist,” impressed by his ability to almost immediately nail the recipes, being blown away by his first batch of the double IPA.

With such a strong start, the recipes had only a little evolving to do as production scales up. Now, you can find Nyx in retailers around West Michigan, including Bridge Street Market, Siciliano’s, Horrocks, Forest Hills Foods, and multiple D&Ws. You can find an up-to-date list on their website.

The original plan was to open with a taproom, experiment with brews and eventually decide on a few beers to launch into distribution. Of course, licensing issues arose and now the plan has reversed, with Stricklen just hoping to open a taproom sometime in 2022. She’s especially excited to have a judgment-free zone where people can come together without any assumptions to try delicious, experimental beer that just happens to be brewed on an entirely gluten-free system.

“There are so many social effects to being gluten-free,” Stricklen said of having to change her diet roughly 10 years ago. “I self-isolated like crazy. It very anxiety provoking. I hated going out with friends. I used to go to breweries all the time, but I didn’t want to go to breweries anymore because I couldn’t drink and I’d have to have a water. Whether it’s your friends or the server, you feel like the weirdo. You feel high maintenance.

“We want to be able to have a place that everybody can come to, whether you’re gluten-free or not. Nobody’s the weirdo.”

Tweet
Published in Libations
More in this category: « Café au Cocktail: Coffee-centric Drinks Behind the Bar »
Login to post comments
back to top