Setting the Mood: How Distilleries Elevate the Experience 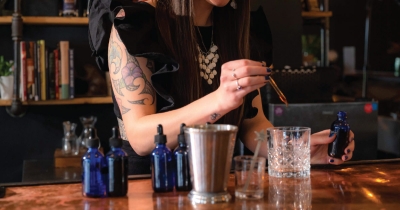 Distilleries have become some of the best cocktail lounges and restaurants in West Michigan, and that’s no accident.

Anyone can buy a bottle off the store shelf and make a cocktail at home, but local distilleries understand the importance of coming together in a shared space and having a unique experience — whether it’s delicious cuisine, drinks you truly can’t make at home, or a stellar atmosphere.

In Grand Rapids alone, we have multiple distilleries offering different experiences within walking distance of each other, so Revue wanted to talk with the makers of our region’s delicious spirits about what kind of vibes they’re aiming for in their current and future locations.

Long Road Distillers became the first distillery in Grand Rapids when they opened doors in 2015, but it feels like they’ve been here for decades. That’s thanks to their efforts in using Michigan ingredients whenever humanly possible, resulting in an incredible product, but it’s also due to the great community space and restaurant they’ve crafted at their first location.

“The thing that’s been most important for us is providing memorable experiences,” said co-owner Jon O’Connor. “We really wanted to be a distillery in a cocktail bar, but realized people are going to be drinking, so we should probably offer some small plates, and then we opened an event space upstairs, and that put more pressure on the kitchen. So the kitchen was sort of an evolution.”

The location in Grand Haven gets a ton of family traffic, so food is even more important there. The lakeshore spot sells more food as a percentage than the other Long Road locations, while the Cadillac tasting room relies on food trucks.

Meanwhile, Eastern Kille Distillery (formerly known as Gray Skies) started with a minimal aesthetic that has shifted a bit with time.

“We have redesigned our tasting room once. Our initial design is best described as, ‘Oh crap, we are out of money and we still need to put furniture in here,’” said co-owner Steve Vander Pol. “After we had been in business for a few years, we were able to afford new furniture and be more intentional about the space. We wanted something modern like the brand, but with a mid-century inspired feel that felt like a throwback to when handcrafted things were more common. We needed a space that made sense to serve elevated cocktails where sometimes you are literally sitting a few feet away from pallets of grain separated only by a glass wall.”

The result is a slick, cool, but comfortable space that feels perfect for savoring a cocktail with friends. Kalamazoo’s Green Door Distilling Co., meanwhile, really leans into the cozy and inviting vibe that makes you feel at home.

“We want to create an atmosphere that is inclusive,” said Ben Sible of Green Door. “When people think of distilleries they think ‘speak-easy’, and while we love a good speak-easy vibe, that type of establishment has been known to cater toward predominantly white males. We want to share our craft and educate the consumer on our process, as well as foster an environment that can be enjoyed by everyone.”

While we could write endlessly about what makes each of West Michigan’s distilleries special and fun to visit — from Wise Men Distillery’s bespoke drinks to Michigan Moonshine Distillery’s smoked meats and moonshine flights — every spot also has educated servers who would love to tell you everything you don’t know about spirits.

“You can expect an atmosphere filled with good spirits, and we aren’t just talking about the drinks,” Sible said. “Our people, our patrons, they are what make Green Door Distilling. Aside from a variety of cocktails on the menu, we also host a variety of events throughout the year, do weekly tours of the distillery and welcome vendors to collaborate with us regularly.

“Cocktails, like most meals, tend to taste better when someone else is making it for you. Our mixologists will amaze you with their technique and how they bring intricate flavors together to create your specialty cocktail.”

Looking forward, both Long Road and Eastern Kille are working on new locations in the area. Less Traveled is a cocktail bar from Long Road going in on Cherry Street, joining a group of restaurants and boutiques already there. A large part of the design came from Long Road’s trouble making outdoor service work at the home location, while Less Traveled has plenty of room for a deck leading right up to the sidewalk.

“I’m standing on the patio as we speak,” O’Connor told Revue. “It’s a super vibrant business corridor with a bunch of great, awesome businesses that have been supportive of us coming to the neighborhood. We don’t even need a kitchen because there are so many great restaurants around us. We actually used to joke, before we came up with the name, we were going to call it the Waiting Room.”

The space will be quite intimate, with capacity for roughly 40 people inside and 40 on the deck, and a design with a different feel than the homebase, incorporating some “modern Scandinavian” design.

“You can’t have a Long Road location and not have a Polish Falcon. But we’ll have some cocktails that are unique to this location. We love cocktail bar, so this is a chance for us to pay homage to some cocktail bars that we love.”

Eastern Kille has something similar in the works, with a small cocktail bar going in on Wealthy Street. “The smaller size and neighborhood feel allowed us to lean into some really cool art deco concepts that call back to a more historical cocktail bar atmosphere. We are incredibly excited for how the space is going to look both as a representation of our brand but also as something distinct and unique feeling in the city.”

However, their much bigger project is the brand-new production facility on 16 wooded acres in Rockford, spurred on by Spectrum Health’s purchase of Eastern Kille’s current facility. They’re aiming for early 2023 with this, so you’ll want to get to the original location for some very special spirit releases before they move on.

“It will include a full bar and restaurant along with a large outdoor cocktail garden connecting to the White Pine Trail,” Vander Pol said. “This space is intended to highlight whiskey as an experience. Making world-class whiskey is a years (sometimes decades) long process that leans heavily on the natural environment where it is made: Everything from the grains to the water and even the weather impact the flavor of the finished product. Building a distillery in the woods closely integrated into the natural environment is a natural extension of the role environment plays in making whiskey.”

Tweet
Published in Libations
More in this category: « Kindred Spirits: Cocktails of All Kinds
Login to post comments
back to top