Brewery Outré: Above and Beyond 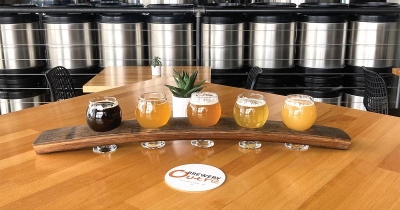 Outré, pronounced “ooh-tray,” comes from the French word for outrageous, but with positive connotations. With a focus on saisons and beer-wine hybrids, the beers  here go against the norm and are unorthodox, unique, off-center, etc.

Owner Ted Linabury began as a homebrewer when he had just turned 21 in Asheville, North Carolina — the city that tied with Grand Rapids for Beer City. With plenty of homebrewing resources available both there and here, his hobby turned into a passion, even as he worked as an engineer.

Five years ago, he began actually pursuing the dream of owning his own business and also noticed that his favorite style of beer, saisons, were hard to find. Experimenting with the local ingredients and wild yeast that go into saisons led to an interest in natural wines, and ultimately, beer-wine hybrids.

Linabury began Brewery Outré in 2017, brewing on a 1 BBL pilot system and distributing to local taps. In the spring of 2020, the pandemic opened up the perfect opportunity to really get to work on bringing Outré to life. Fast-forward past years of construction, planning and acquiring a shiny new 5 BBL system, and the brewery opened in April of 2022.

The taproom is cozy but not at all cramped, has plenty of natural light and a nice patio outside. When I visited in July, nine beers were on tap, with a couple more in the tanks just about ready to drink.

Despite the name and description, Outré has plenty of more typical, “approachable” beers for those who just want something classic. The Honey Kolsch is a crisp golden ale with a touch of sweetness that makes this go down real smooth. When I got to this one in my beer flight, I drank it all before I even realized what I was doing. Then there’s Lo’s Cold Gold, an India pale lager that fits the style perfectly — clean, balanced, light on the malt but not too bitter. It’s basically a highly crushable IPA.

What I’m especially interested in, though, are the beers that make you pause for a second and really think about what you’re tasting.

For instance, the Blanc Slate is a hybrid of a juicy IPA and a crisp glass of sauvignon blanc. It’s complex, clearly thoughtful, and unique, but in a welcoming way. The dryness from the wine helps wipe out the bitterness from the hops, so you don’t get that lingering aftertaste that can build up and make other IPAs hard to finish. It has body, but is also light. I’m excited for Outré to get their canner running so I can take some home!

Another hybrid, the Mimosa Sour is moderately hopped and fermented with muscat grape juice. This one is delightfully sour but won’t make your whole body pucker. Instead, you get a nice slightly sweet, slightly citrusy experience, just like the perfect mimosa.

As for saisons, Outré’s False Spring is incredible. Maybe it’s the 100% Michigan-grown ingredients — including native hops — but this tastes a bit like drinking flowers. Delicious flowers. If you love tea (and I do), especially Earl Grey, this brew should have you buzzing like a bee in the garden.

Linabury also let me and a visiting tour group taste two upcoming beers: A Rhubarb Saison, which was subtle but balanced and refreshing, and a Zin Sour, which had an interesting complexity leaning toward a glass of rosé, along with a nice pink complexion.

This creativity and complexity comes out of Outré’s philosophy: Let the beer be an expression of the ingredients.

“Those farmhouse breweries, they brewed with what was around them,” Linabury said. “They brewed with local yeast, which was originally wild. So that was at least an important experiment. Obviously, I like beers other than that, but I want the ingredients to come through clearly. And I often like that approach of, ‘Let’s see how these ingredients express themselves’ rather than, ‘I’m engineering a beer to taste like this.’”

Linabury says he partially owes Outré’s success to many other great organizations in Michigan, from small business lender Northern Initiatives to Empire Malting Company and Twisted Hops Farm. Not to mention the food trucks that provide the kitchen-less Outré with great eats!

Come to the taproom and you’ll see art on the walls from local artists, plenty of board games for groups to play, and comfy couches to sit on, along with typical table seating. For food, you can bring your own or order delivery, but there are plenty of great places to order from nearby: Louie’s Tophy House, Elysium, PFC Grocery & Deli, and more.

With a small snack menu, canning and new beers on the way, Outré has exciting things happening and even more ahead.

“What’s most important to us is to make new and fascinating beers, using as many local ingredients as possible,” Linabury said. “And I think we need to keep pushing the boundaries of beer, evolving the style of beer-wine hybrids and things like that.

“I think they’re brilliant ideas and concepts, which we’re just beginning to explore.”