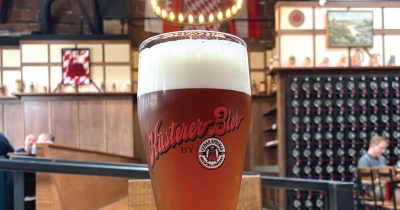 A slice of Bavaria has arrived on Grand Rapids’ West Side in the form of Küsterer Brauhaus.

The new beer hall is far more than just a second location for Cedar Springs Brewing — it’s a love letter to Bavarian-style beer halls from owner David Ringler, who got his start professionally brewing in the ‘80s in Germany. He fell in love with the culture and has been working to bring it back to West Michigan ever since.

Ringler was initially looking at the West Side before Cedar Springs opened, in large part due to being a big history buff. “I’ve always loved this area and I love the history here. It was Germanic, then it was kind of Polish and Central European. And then it’s become much more diverse here after the war. It’s a wonderful, vibrant community.”

That love of history shines through at Küsterer Brauhaus. In fact, the name comes from Christoph Küsterer, the first German and professional brewer in the area, who opened the City Brewery in 1849. Then there’s the space itself, which feels a bit like it’s from another place and time, especially thanks to the many aspects Ringler incorporated from his favorite beer halls in Germany.

The ceiling is rarely the center of attention, but at Küsterer, high, wooden ceilings with skylights draw your eye immediately. Drop your vision and you’ll see all kinds of historical and cultural flags hanging over a beautiful taproom with a truly classic feel.

Everything here is designed to encourage community. The bar? It’s standing, so people don’t just grab a stool and ignore everyone else. The tables? Largely communal, or at least arranged in a way that allows for cross-table conversations. The kitchen? It doesn’t exist. This is NOT a restaurant. There is, however, a deli case with highly shareable items like a giant pretzel, for grazing and social snacking — inspired by one of Ringler’s favorite beer halls, of course. Then there’s the Stammtisch, a round table reserved for members.

“You have to be a member to sit there, but what we found in Cedar Springs was that we had people in that community who sat at that table together, and they struck up a conversation and discovered they’d both been in that community for a lifetime, but never met. And now they meet there on Tuesdays. They’ve created friendships and created connections. We’re hopeful for the same thing here.”

These connections were already beginning on the day of the soft opening, as Ringler pointed out multiple people who had come in strangers and were now having conversations thanks to the standing bar and open tables.

Then there’s the beer itself, which you may have enjoyed already at Cedar Springs Brewing, but for the uninitiated: Küsterer quite strictly follows the Reinheitsgebot, historical regulations limiting the ingredients in German beer to four ingredients: Water, barley, malt, and hops. Yet, even within these confines, they offer around 20 quite different beers throughout the year. These brews have won many awards, from Revue’s own Best of the West to the prestigious Great American Beer Festival.

“Our belief is that these beers have lasted centuries for a reason,” Ringler said. “These recipes are 100, 200, 500, 800 years old. They’ve been around and stood the test of time through multiple cultures in multiple geographic areas.”

It helps that the brewing and kitchen staff take turns visiting Bavaria and learning from the masters, working with brewers who’ve been doing this for not just years, but generations. Ringler knows there are some things you can’t learn from a book.

Going forward, Küsterer Brauhaus will work its way up to more open hours and regular live music. For now, Ringler is just excited to finally be open and joining Bridge Street, which is already home to New Holland Brewing, Harmony Brewing, Jolly Pumpkin, Arktos Meadery, and the forthcoming Broad Leaf. They all have very different styles, so Ringler hopes the area becomes a beer destination.

Most of all, he hopes you come enjoy a giant pretzel and Original Weissbeer, a recipe that’s 600 years old — and make some friends along the way.

“We’re a little taste of Munich without the plane ticket,” Ringler said. “This is intended to be a comfortable atmosphere and vibe in here that fosters conversations, and we certainly hope to generate those in our community.”

Tweet
Published in Libations
More in this category: « Brewery Outré: Above and Beyond
Login to post comments
back to top