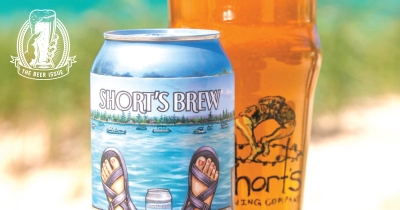 Too often, the year passes by without taking time to look back and reflect on what worked and what didn’t.

So we decided to chronicle some of the best beers of 2022, as chosen by brewers and other industry folks around West Michigan! Of course, we can’t dwell in the past, so we’re also looking forward to the future.

Here are local breweries’ favorite beers of 2022, and what they’re excited for in the near future.

My favorite beer from this past year is Panoptic, a Pastry Sour with blueberries, cinnamon, vanilla, graham crackers, and cocoa nibs. Looking at the ingredients, one may wonder if it will work well with all of the added flavors. Not only did it work, but each flavor comes through in a very fun way—the blueberry notes were big and bright, the cocoa nibs arrive subtly but stay lingering, the cinnamon dances on your tongue, the graham cracker pulls things towards a pie like expression, and the vanilla, though on the edges, really rounded everything out. Oh yeah, and it's dry! Great beer.

The beer I am looking forward to the most is our Peach Genetic Drift. This should be releasing in October. We haven’t released this one in a few years, and I am counting down the days for its return. This one won a silver medal at the World Beer Cup in 2018. It is a saison that really dials in on our house cultures and with the addition of the peaches, there is a great entanglement of complexity throughout the beer. Cheers!

My best beer in 2022 would be the Honeycrisp Ale, which is one of our year-round mainstay offerings. Made with Honeycrisp apples from the farm, it’s a malt-forward amber with the sweet finish of Honeycrisp apples. Good year-round and even better during the fall harvest season and cool autumn evenings. Each pint reminds me of the farm and is a little bit of Fall in every glass.

I’m most looking forward to our release of Vanilla Bourbon Imperial Brown this November. Last year’s batch recently won Silver in the US Beer Open in the barrel aged strong ale category. This year’s batch has been aging in bourbon barrels for 9 months and I’m looking forward to the rich malt, vanilla and smooth bourbon notes in this upcoming release.

My favorite release of ours in 2022 was our barrel-aged tribute to the whiskey cocktail – Highball Drifter. Inspired by drinks like the Old Fashioned and the Manhattan, this malt-forward ale was brewed with orange zest and cherry and then aged for a year in bourbon barrels. It’s an excellent late-night sipper for when you’re ready for a cocktail but not quite sure if you want to be done drinking beer yet.

Looking forward to 2023, I’m pretty stoked for the next KBS variant. KBS is a bourbon barrel-aged Imperial Stout brewed with coffee and chocolate that is available year-round, but we’ve been crafting different variants on this theme for the past few years. Next year we have a version coming out that features even more chocolate plus the addition of cherries for a distinct cherry cordial vibe. Look for KBS Chocolate Cherry early in 2023.

My favorite beer of 2022 was Dragon’s Milk Triple Mash. This beer is so smooth and drinkable and masks its 17% ABV well. The flavors of roast, vanilla, and oak are turned up to 11, it’s a perfect nightcap.

Coming up next, I’m most excited for Ichabod Pumpkin Ale. Despite the ‘controversy’ around pumpkin beer, at the end of the day Ichabod is a classic that was made to amplify everything great about fall. Ichabod is made with real pumpkin and is perfectly spiced without being overpowering.

My favorite beer from Grand Rapids Brewing Company is Hug Juice. It is one of my first recipes I introduced to the brewery when I started here in June 2021. It has evolved over the year and has only gotten better. It’s hard to knock a beer out of the park on the first try, sometimes it takes making it several times to get it right. It’s now our #3 seller after Silver Foam and Fishladder, which are two of our flagship beers.

I’m excited about Oh Bae Purple Drank which is a Cream Ale infused with Ube (purple yam powder), calamansi citrus, Tahitian limes and ginger. It’s our collaboration with the GR American Culinary Foundation and Chef Nick Gonring. This beer tastes like a glass of fruity pebbles and looks deep purple with a creamy lavender head. I’m also excited about the full can art wrap. The art was done by our new Creative Manager Jenna Clark. The label is dope!

My favorite beer of 2022 is Cosmic Fruition, a hazy IPA sitting at 6.8% ABV, which started being distributed around the state this year. I used a special thiolized yeast strain to pull a wide range of deep tropical fruit flavor from not only its big hop charges but also directly from the grains themselves. With big flavors of pineapple, mango, passion fruit & papaya, many think that this beer has been fruited in some way. It may taste like it, but it certainly hasn’t been!

Looking ahead, I’m excited about creating something to conjure your cherished childhood memories and satisfy that perennial sweet tooth. I just brewed a Chocolate Cupcake Dessert Stout that utilized many boxes of Hostess Chocolate Cupcakes dropped directly into the mash!

Marshmallow fluff, vanilla beans and rich cocoa combine with a cupcake grain bill to make a Stout that I hope will take you right to that place of creamy comfort. Name and ABV TBD.

Docksitting was definitely a fave from the summer, great beer, fun concept and a great connection to our water-filled locations.

Up next, we have a couple exciting brews. Pure Michigan Winter Pils will be the start of a year-round seasonal Pure Michigan line up. AND we are releasing Power of Love in January, a truly unique pink colored Shandy created by blending Northwoods Gourmet Lemonade and a Wheat Ale brewed with raspberry and rosemary. It’s one of our most requested beers! Fan faves Spruce Pils and Exterior Illumination are coming out yet this year. We had to pick a shload of spruce tips for these two releases.

Tweet
Published in Libations
More in this category: « Küsterer Brauhaus: Beer, History, Community How to Find the Brew for You »
Login to post comments
back to top