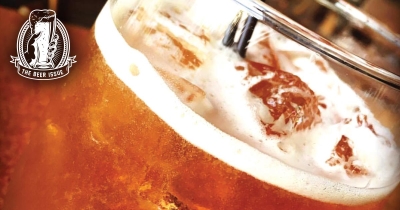 Beer? Fantastic. Cocktails? Amazing. Beertails? Out of this world.

Over the years, we’ve seen all kinds of beers inspired by and mimicking cocktails, from Short’s Brewing’s Mule Beer to Founders Brewing’s Bottle Shop Series and beyond. It only makes sense that people bartenders would go the reverse direction and use beer in cocktails. What are spirits but extra-fermented beer, after all?

While beertails come and go from menus like the changing seasons, here are a few of the best beer-based cocktails around West Michigan right now.

Harmony has had excellent beer and cider cocktails for as long as we can remember, including the Proud Mary which is topped with a dark brew, but we love the Beergarita. Tequila, lime, triple sec and IPA come together for a citrusy explosion, whose sweetness is cut by the bitterness and maltiness of the beer.

This one’s a beast: Skrewball Peanut Butter Whiskey, Cold-Brew Espresso, Averna Amaro, Pedro Ximenez Sherry, and Guinness Draught. This liquid “burrito” is all of your favorite beverages wrapped up into one, with a good mixture of sweet and bitter flavors. The Guinness smooths it all out and brings it all together, just like a great tortilla.

This is quickly becoming the official cocktail of “if you know, you know.” A spaghett is a Miller High Life, topped with a bit of Aperol and lemon juice, poured right into the bottle. It’s insanely refreshing, easy to make, quite cheap, and takes the standard beer experience to new heights.

Long Island Iced Tea gets a lot of guff for putting function over form, but we think there’s something to be said for efficiency. Besides, Thornapple kicks things up a notch here by using India Pale Ale instead of cola. Gin, rum, vodka, sour cordial and IPA—that’s a party in your mouth, right there.

It only makes sense that a distillery that’s also a brewery would have beer cocktails. This one features Devil’s Message Planked Rum, ginger syrup, lime, and Maple Rumble beer. That beer features the same ingredient as the rum (sugar cane juice), with notes of toffee, caramel, and maple. It’s like a Dark & Stormy made just for autumn!

You had to know the beermosa was coming. For those of us who don’t love the intense carbonation of bubbly, this is a perfectly mellow experience that still gives the refreshing taste of a mimosa. At SpeakEZ, they call it a Sun Salutation, and it uses a bartender’s choice of rotating draft beer.

Tweet
Published in Libations
More in this category: « How to Find the Brew for You Mead: What's the Buzz? »
Login to post comments
back to top