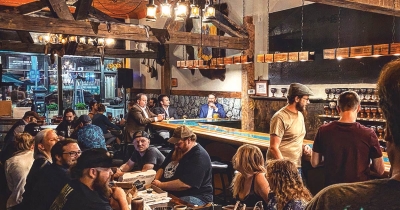 The oldest alcoholic beverage in the world has lasted millennia by being astoundingly versatile. Sweet, spiced, warm, chilled—mead can be whatever you want it to be.

If you don’t know what mead is, that’s understandable, since beer, wine and spirits have taken centerstage in the modern palate. But there are multiple world-class meaderies in Michigan, including one practically downtown Grand Rapids, and people are starting to notice.

To help explain exactly what mead is, we turned to Maciej Halaczkiewicz of Arktos Meadery, now open on the bustling Bridge Street.

“The basic way to make mead is to take honey, put in water, and then either wild yeast or added yeast. That, plus time, will create mead,” Halaczkiewicz said.

So, it’s simple as that. Mead is fermented honey, much like wine is fermented grapes. In fact, you may sometimes see mead referred to as honey wine, but watch out! Some “honey wines” on shelves are really just white wines sweetened with honey, which is a very different experience.

A basic mead with nothing added will be around 15% ABV, like a strong wine. It’s not a sugar bomb, but a gentle, nuanced sweetness that carries the natural complexity of honey. I typically drink IPAs and bourbon, but still love mead—there’s just nothing like it, and it can take on so many different flavors.

While Arktos uses Michigan wildflower honey for almost everything, the flavor can vary greatly depending on the kind of honey alone. Halaczkiewicz mentioned a Polish meadery that almost exclusively uses buckwheat honey, and you can taste the buckwheat. He’s been to a spot in California that used honey from the coffee plant, resulting in a mead that tastes like java. Some places in Africa use killer bee honey, which tastes like anise.

Then you get into the spices and fruits and other fun things you can add into mead. Arktos right now has ginger mead, papaya mead, grape mead, yuzu lemon mead, and even a maple syrup and blueberry mead, which Halaczkiewicz said is especially good when warmed up.

I tried the Doc Holliday, a huckleberry mead with a perfect balance of fruity tartness and sweetness, which gets even better with just a touch of ice. It was very similar to a sour beer, but easier to drink. And the East Sea Dragon King is a hibiscus mead, light and floral with a touch of fruitiness.

Arktos is also working on even more offerings, from braggots (mead and beer hybrids) to mead spirits and mead cocktails. One bartender developed “buttermead,” which is mead mixed with a special spiced butter and warmed up. It might just put you to sleep.

Where Did It Come From?

The oldest evidence of mead goes back at least 9,000 years ago to northern China, where pottery was discovered with traces of fermented honey. Ancient recipes for mead have been found around the world, from Europe to Africa to Hindu texts.

“All these places have some history of mead making, but it didn’t originate in one specific location,” Halaczkiewicz said. “In Ethiopia, there are stories of like, they put honey in their water to preserve the water over a two-week trip back to their villages. It fermented, they drank it, they felt good.

“There’s another story where humans saw apes drinking water from dead tree trunks, where the beehives were, and they would look all jolly, so the humans went and tried it. Vikings were really big with mead. The berserkers were known for drinking before battle because it gave them, you know, crazy powers and strength. It’s so cool that it doesn’t belong to any specific culture.”

Where Can I Drink It?

There are multiple great meaderies around West Michigan, but Arktos has been holding the scene down in Grand Rapids since 2014, when they began distribution. That led to a small taproom in an office building south of downtown, which was cozy but difficult to find.

The new taproom on Bridge is in the heart of a busy area and makes for the perfect pre-dinner waiting room or post-dinner drinks. Opened in 2021, Arktos is comforting, filled with stone, art, pelts and big barn beams that Halaczkiewicz installed himself. It’s the perfect atmosphere for drinking the nectar of the gods out of goblets.

In the basement, Arktos has Cellar of Tales, a private, immersive space for playing TTRPG and board games with friends. It’s been decked out with lights that change colors, Bluetooth for music, and more.

Whatever you come for, Halaczkiewicz just wants you to give mead a try.

“To people who don’t know what mead is, it comes in all different flavors, varieties, dryness and sweetnesses. It is the original alcohol. Give it a shot, at least, so that you can see what it tasted like when Vikings would drink before battle.

Tweet
Published in Libations
More in this category: « Cocktails and Beer
Login to post comments
back to top