Jarred Sper moved to West Michigan in 2010 with an intense love of craft beer, and was intent on starting up a brewery. He had been a homebrewer for years, and upon meeting Randy Perrin, they decided to go all in and work together to make their mutual dream a reality.

The location for Perrin Brewing Company, on Alpine and 7 Mile, was owned by Perrin and was a perfect building to expand upon to host their new project. At the time, nearly all of the breweries around West Michigan were in a state of expansion, and they wanted to embrace the idea of future growth.

Headbrewer Sam Sherwood started professionally brewing at Michigan Brewing Company. Over the next few years, he spent time at Arcadia and Founders before settling in at the Waldorff Brewpub in Hastings for five years before lending his talents to Perrin.

"It was nice to come in to new equipment, with the freedom to do what we want." Sherwood said.

On Dec. 14, Perrin opened its doors to an overwhelming response. There was a line out the door and the 250-seat pub was at capacity.

"Hundreds and hundreds of people," Sper said about the opening. "Every hand was on deck."

The taproom is spacious with many high-top tables and stunning wood, with three large, bright tanks standing guard behind the bar overlooking the pub. There is also a private section for reservation located on the second floor, and a patio section that runs alongside the front of the brewery.

"We want to make sure everyone who walks into those doors is comfortable," Sper said. "Treat them as a guest, as if they were walking into their own living room. At the end of the day, this brewpub is their place."

The mainstays include a golden ale, a black lager, a raspberry blonde and a wonderfully clean IPA. The pub has 15 taps that are constantly rotating, with three tiers of brews.

"Our portfolio is clean, sessionable and drinkable beers," Sper said. "We wanted to arm our brewers with the best possible equipment so they can make the best beer."

Sper and Sherwood also placed a lot of emphasis on community involvement in their beer, calling their regulars "loyal locals" who frequent the pub and alert them to flavor changes and express concern when their favorite brews go off-tap.

"We listen to the people who drink here," Sherwood said. "When people want something that goes off tap to come back, we're humbled by that."

Perrin opened up a mug club in January, and in three weeks sold more than 300 mugs to patrons. They are also beginning bottle distribution this spring, offering 12 and 22-oz. bottles. They are also working on an extensive barrel aging program and a sour program.

"You should come here to experience our taproom, but come here for the beer," Sherwood said.

BEER OF THE MONTH: Founders KBS 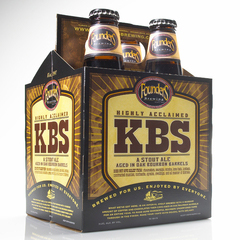 Rated No. 4 in the United States on Ratebeer last year, and No. 9 in the world on BeerAdvocate, this release is a big deal to a lot of people. The response last year was unprecedented, and Founders has taken steps to make this year's release easier and more available to the public. KBS hits the shelves April 1, and will go very quickly.

This beer pours pitch black with a deep, brown head and smells of bourbon, coffee and roast; the mouthfeel is very full and slightly thick, bursting with prominent notes of chocolate, coffee, bourbon and vanilla above a bold dark malt backbone. This brew finishes with lingering notes of oak, chocolate, and roast, leaving your palate hungry for another sip.

The Southern Michigan Winter Beer Festival in Jackson is held March 9 and features more than 140 national and local brews, as well as food. For more information, visit jacksoncountyfair.net/beerfest.

The Art of Beer Festival at the Mendel Center (Benton Harbor) on March 23 features national craft, food, and music for your enjoyment. Visit artofbeerfestival.com for more information.