When one thinks of microbreweries in West Michigan, it's easy for the mind to quickly jump to the usual players in the usual cities, like Bell's in Kalamazoo and Founders in Grand Rapids. And even as these mainstays continue to be a centerpiece for the area's craft brew excellence, communities along the lakeshore are also contributing in significant ways to our reputation as one of the best damn beer destinations anywhere.

Especially with breweries like New Holland Brewing Co. in Holland, which is currently the third largest in the state. In the brewery's 17 years, New Holland has seen significant growth, and has expanded its availability way beyond Michigan, now being offered in states throughout the Midwest, as well as making its way toward the East Coast.

Most recently, the company completed a $1 million renovation and expansion project that includes a new beer garden deck that boasts an outdoor bar, additional seating and even a canopy for days when the weather is uncooperative. In addition, the brewery did have its sights set on downtown Grand Rapids as a possible location for a second brewpub earlier this year. And even though that endeavor has been put on an indefinite hold, New Holland does aim to revisit the plan, maybe even as soon as 2014.

Meanwhile, other breweries are also stepping up to represent the lakeshore. Saugatuck Brewing Co. (SBC) in Douglas is one such brewery that has enjoyed the growing success of West Michigan's craft beer scene.

"In our case, we're certainly growing," said Kerry O'Donohue, vice president of marketing at SBC. "We're bringing our beer to a much wider audience. We also have a much larger brewing system on order and an expansion starting next month."

The project will allow SBC the ability to move from a 10-barrel system to a 40-barrel system this spring, that includes not only a new bottling line, but also allows the brewery to do some more things with barrel aging, specialty batches and more 22-oz. releases as well. 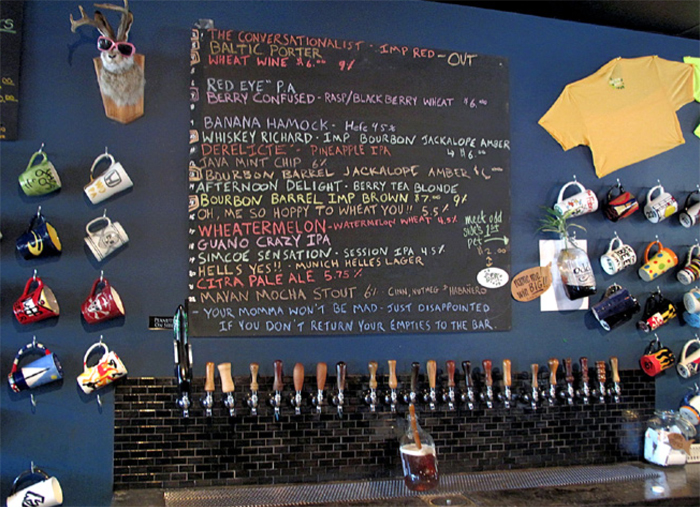 In Grand Haven, OddSide Ales has been in operation since 2010, offering a variety of unique choices that will soon include a milk stout, Mexican hot chocolate and even an habanero IPA with papaya. OddSide has also grown with the industry, and just recently opened an off-site facility to begin its own bottling.

"We just started bottling this spring," said Owner Chris Michner. "We're working on expanding our equipment for our production. [...] We just got into our production facility, so right now we're really busy just trying to get settled in."

And not only are the current breweries along the lakeshore enjoying the industry's growth, but some new blood is climbing aboard the craft beer train as well.

In July, Holland saw the opening of its third microbrewery, Big Lake Brewing. The owners' love for craft beer had them visiting other breweries throughout the area, and what they found was not only a mutual love for great beer, but also an infectious sense of camaraderie in the industry.

"What attracted us the most to this business was the amazing community of people we've met," said co-owner Travis Prueter in a press release. "Breweries don't see other breweries as competition – they embrace the philosophy that 'more is more.' We want to contribute to an already strong industry, and have been overwhelmed by the amount of advice and support we've received from others. And, we love beer, so that certainly doesn't hurt."

Muskegon will also be part of the West Michigan microbrewery community in the near future, as partners Joel Kamp, Chad Doane and Michael Brower are in the process of getting things rolling on their endeavor, Pigeon Hill Brewing Company.

"Construction of Pigeon Hill Brewing Company is well underway," Brower said. "Every day that passes brings us closer to installing our brewing system, preparing our taproom and serving great beer."

The Pigeon Hill team hopes to bring not only quality brew to the table, with its members having won various regional and national awards with their homebrews, but also a heavy focus on local community support as well.

"Our team set out to accomplish two goals: Restore pride in our city, and produce great, Muskegon-made beer for our region," Brower said. "It is not only taste that separates craft beer from larger domestics; it is also the impact that craft beer has on the local economy, and on the community as a whole."

So even as the more inland cities continue to attract the eyes and ears of those paying attention to West Michigan's booming beer business, keep your eye on our neighbors along the lakeshore. Their love of quality beer, the evolving beer culture, and sense of community are going to continue to be a welcome addition to the party.