TO CELLAR OR NOT? Revue conducts a 5-year vertical blind tasting of Founders KBS

A bevy of adages extol the virtues of patience.

We’re told that good things come to those who wait, that good food takes time, and that wine tastes better with age.

Patience, as they say, is a virtue.

When it comes to most beers, however, waiting to drink them can produce undesirable results. For example, the closer you drink an IPA to its bottling date, the better your chances of enjoying it as the brewer intended, with its full hop character and desired flavor.

Whereas IPAs are the drink of the impatient, many barrel-aged stouts have long been considered the beer of choice for people with the resolve to let time work its magic — both at the brewer level and for the end consumer.

For many drinkers, the choice to cellar beer comes down to prolonging their enjoyment of a favorite limited-edition bottle, or extending the life cycle of the purchase beyond plunking down more than $20 for a four-pack. And it’s not like you’d want to slam four of these big beers in one sitting, anyway.

Luckily, high-ABV, bourbon barrel-aged beers can do well in the cellar, meaning that their flavors can develop over time, mellow out and even improve. At least, that’s what I’ve always told myself as I squirreled away another expensive beer in my basement cellar.

But it begs the question of whether age does these beers any favors, and just as importantly, at what age they begin to fall off.

To find out, I pulled from my cellar a five-year vertical of KBS from Founders Brewing Co. spanning the years of 2013 through 2017 and convinced my cohorts at Revue to conduct a blind tasting.

However, the results proved inconclusive in answering any of those questions.

According to Founders Brewmaster Jeremy Kosmicki, the results prove that the choice to cellaring beer comes down to personal preference. His personal choice: drink all beer as fresh as possible. 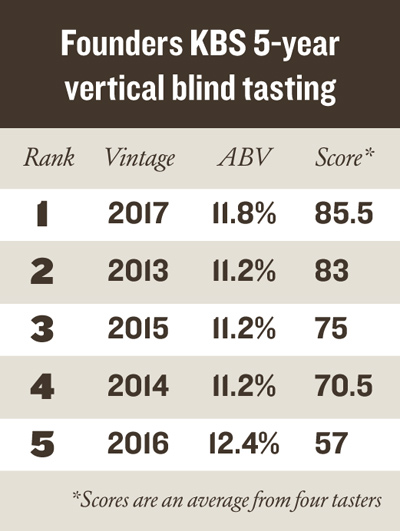 “As a brewery, by the time we release it, the beer’s already spent a year aging in these barrels,” he said. “With this beer in particular, as it ages, some of the sharper coffee flavors fall off and it allows the chocolate and the wood from the barrel to come through. Personally, I like that in-your-face coffee — I’ve been really pleased with the 2017 version.”

In the notes from the blind tasting, the consensus of tasters noted that 2017 was the most coffee-forward of the five vintages, with a heavy presence in the nose and a lingering coffee bitterness in the flavor. Likewise, the tasters all agreed that the oldest beer was the most bourbon-forward, likely as the coffee had almost entirely fallen off, and had the most roasty and chocolate notes in the flavor. Strangely, the high-test 2016 vintage had the most neutral aroma.

If anything, the tasting notes showed the mellowing characteristic of time, as the beer seemed progressively more weighted toward bourbon notes than coffee flavors as it aged.

Kosmicki said the recipe for KBS always stays the same, although year-to-year variations can be attributed to the bourbon barrels Founders procures to place the beer in for aging. Given the volume of barrels needed for its annual batch of KBS, “we take what we can get.”

“We get a good supply and we have a line on quality barrels, but every year we’re dealing with different vintages and different distillers,” he said. “We dial in our favorites and age range — how long the whiskey has spent in the wood. If it’s 10-12 years, it has a lot different character than if it’s spent one year with bourbon in it. If it’s had it longer, it tends to impart a deeper, more complex character with a lot of vanilla notes. With younger bourbons, they tend to be more hot and in your face. Some years, we get more of one than another.

“It will come out different every year, but it’s still the same beer.”

For customers who want to try their hand at cellaring beer, Kosmicki recommends they store it in a cool, dry, dark place, like a basement or a closet.

“Beer wants to be cold,” he said. “It degrades a lot faster as it warms up. Even after a month, a beer kept cold stays better than a beer kept warm. If you can keep it on the cooler side, you’ll end up with a better overall experience.”