YELLOW BEER? Michigan brewers go back to basics — with a modern twist

While I’ve been #blessed to try many great beers over the last couple of years in pursuit of journalism, one that I can’t wait to try again is not a crazy barrel-aged pastry stout or hopped-up hazy IPA.

Rather, it’s the Slow Pour Pils from Bierstadt Lagerhaus in Denver. The beer lives up to its name, taking several minutes to deliver from a special, traditional-style tap that allows the head to peak over the top of the glass. The process accentuates the beer’s soft and nuanced flavors and results in a delightful quaff — the kind that will make you seriously consider driving more than 1,100 miles to get.

What can I say: Pilsners speak to me because they’re both easy drinking and complex beers if you want them to be.

Maybe that’s why I purchase Pilsner Urquell, a true Czech pilsner first introduced in 1842, nearly every time I see it with a fresh date stamp (or on draft). It’s the O.G.. standard bearer for the style, even if the kegs and cans that make it stateside don’t live up to the fresh experience at the brewery.

Luckily, Michigan craft breweries have also started to embrace pilsners and lagers in growing numbers. At Revue, we decided to try several new or refreshed offerings, and those we missed in a 2016 taste-off.

Arbor very recently switched to cans, and the result with this beer was markedly improved from when Revue last tried a bottle of it in 2016. (The product was assuredly fresher this time, too.) It pours clear with solid head retention. Delicious bready aromas give way to a smooth flavor, with just the right amount of hop bitterness. A refreshing, solid offering. Score: 84.5

OK, so it’s not a pilsner, but this is a highly crushable lager. Not much on the aroma front, but the smooth taste, effervescent carbonation and overall poundability makes this a great choice for day drinking, or maintaining a buzz. Score: 78

God Save The Pils

Pours with a slight haze and thick head. A totally acceptable (and traditional) level of buttered corn notes (a.k.a. DMS) present in the aroma and flavor. This feels the most European of the bunch, with stronger grainy and yeasty flavors present. Score: 76.5

This dry-hopped pilsner perhaps leans more to the India Pale Lager style in taste than a traditional pils, but that’s OK. It features great lemon and citrus notes in the nose and at first sip that mellow out, adding to its drinkability. Score: 74.75 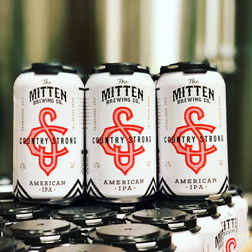 Speaking of crushable pilsners, Creston Brewery this month will release cans of Pilz at the taproom, located at 1504 Plainfield Ave. NE in Grand Rapids, the company’s first-ever can release. Pilz is a Michigan-centric take on the style, brewed with Michigan-grown Zuper Saazer hops and locally sourced pilsner malt. It quickly became a favorite among Revue staffers last summer and fall. We’re glad to see it back.

The Great American Beer Fest award-winning Rockford Brewing Co. is finally pulling back the curtain on a secret project at a special event on Feb. 20. The brewery will release the first beer in its four-part Wild Sour Ale series at the taproom, located at 12 E. Bridge St. NE in Rockford. While few details were available at the time this edition went to press, we do know the beer features special packaging. Stay tuned for more.

Oprah’s favorite West Michigan microbrewery has started packaging one of its popular mainstay beers in cans. The Mitten Brewing Co., located at 527 Leonard St. NW in Grand Rapids, is now offering six-packs of Country Strong IPA, a 7.2-percent ABV American IPA featuring Simcoe and Centennial hops. A sixer will set you back $10.99 at the taproom, and look for the beer to show up soon at retailers. (For the curious minds: Oprah pounded “a few” of Mitten’s golden ale know as The Stretch, according to sources in the know.)

All Day Erry Day: Sales of All Day IPA make up about 60 percent of the volume at Grand Rapids-based Founders Brewing Co., according to a report in Brewbound. Additionally, off-premise sales of All Day at multi-outlet retailers and convenience stores skyrocketed to $48.3 million last year, up from just $2.5 million in 2013, analyst IRI reported.

Razzle Dazzle: Bell’s Brewery will release Sparkleberry Ale in 16-ounce cans for the first time ever starting in June. The raspberry Belgian-style tripel ale has long been released during Kalamazoo Pride in support of OutFront Kalamazoo, a resource center for the LGBTQ community in Southwest Michigan.