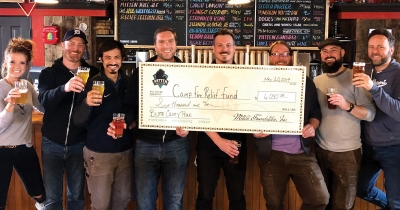 No buts about it, The Mitten Brewing Company makes kickass beer and pizza. But lately, they’ve also been making headlines for some supreme acts of kindness. From eliminating school lunch debt to feeding kids during COVID-19 school closures, the small business has shown the power of pizza extends beyond the crust.

These good deeds have not gone unnoticed. An in-house survey found that 61% of guests visit the brewery specifically because of their charitable giving. Clearly, people care about The Mitten’s caring.

At the heart of said caring is Christopher Andrus, co-owner of The Mitten and the founder of the Mitten Foundation, Inc. You may have spotted his face in photo ops with oversized checks but rest assured: These moments are the furthest thing from performative. Andrus is humble, diligent and always considering others before himself. If there was one slice of pepperoni left in the box, Andrus would let you have it, and he’d cook you another pie to go.

In his new book, Dough Nation, Andrus details this philosophy of giving first through his firsthand accounts as a small business owner. The stories illuminate how partnering with nonprofit organizations and leading with your heart can affect significant change in a community — and boost business too. On release day, Revue caught up with Andrus about beer with benefits, altruism vs. egoism and how we all can participate in giving back.

How was writing this book like brewing a beer?

I had to realize this book wasn’t a memoir, it was a slice of life. I battled imposter syndrome, but I felt that the voice of a small business owner who was doing good work right now was missing in the canon. People hold onto their successes and their lessons until the end of their lives. By the time a book comes out after a 30-year career, most of their lessons don’t resonate to anybody anymore. Generations have changed over and we’ve got to share gains as we experience them because the situation is dire. It’s do or die time to reimagine how we fund philanthropy.

I’m interested by the idea in your book that giving should be a function of revenue, not of profit. Can you explain what you mean by that?

We have to build giving into the way we do business. I hate the term “giving back” and I hate the term “corporate social responsibility” because those both imply taking first and then giving later — get your wealth by stepping on someone’s neck and then give it away to purify that action.

I think we can make our money in a virtuous way. We can bring nonprofits in our business and build them into the revenue stream. We can create products with benefits. I just don’t like this binary idea of making money in a purely self-interested way.

I think about your Ted Raspberry Ale — a dollar donation to the Inner-City Youth Baseball and Softball program was built into the price. What are some other ways that you’ve made giving easier for patrons?

We try to make this a fun place to hang out because I believe the future of giving is meeting people where they are and with the habits they have, without asking them to detour. People’s patterns are what they are. It’s not our job to change them, it’s to understand them. If people love coming here, how can I as the owner bring meaning to their experience?

When it comes to giving, do we draw a line between altruism and egoism?

One of the main misconceptions we have about giving is that it’s not virtuous if you take credit for it. I think that there’s definitely a way to be disingenuous about it in only seeking credit, but our ability to give thrives on participation.

In the book, I talk about our school lunch debt gift and how because that got so much publicity, all these other companies started paying off lunch debt. Their money would’ve never been shaken loose had it not been for the publicity.

I think that shows giving can be contagious. Have you noticed other ways The Mitten’s giving has influenced local businesses?

We used to give between 25,000 and 35,000 a year. In 2018, we did 52,000 and last year we did 75,000. We’re seeing it grow because other people are joining and augmenting our efforts. And I give all the credit to them. I view our role as to sometimes just get the ball rolling and step aside when a better solution presents itself.

It’s about demonstrating what can be done, proving that concept and then building on it. For example, last year’s Love Shouldn’t Hurt campaign for Safe Haven, there were three companies involved. This year, there’s 23 breweries on board.

What advice would you give to people interested in giving but who aren’t sure where to start?

Resist the idea that anything helps, because too often, philanthropy becomes more of an administration problem for the people that actually need the gifts. We need to abandon affinity as the guiding principle. Affinity can be a useful part of starting to think about philanthropy. What do I care about? What is my life and impact by? But affinity can be the enemy of need as well.