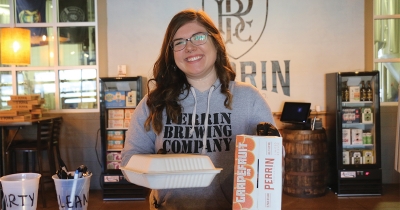 In cult classic Shaun of the Dead, Shaun’s plan to weather the zombie apocalypse was simple: Head to the Winchester, have a nice cold pint and wait for things to all blow over. How’s that for a slice of fried gold?

In the case of the COVID-19 crisis, our pubs are closed but we could still use some beer to survive. And now, more than ever, our breweries and bars need us to survive. With notoriously thin profit margins, not everyone in the industry was braced to weather this pandemic; with doors shut to the public, our favorite watering holes have had to improvise strategies to keep our glasses full — at a distance, of course.

The quickest fix for most has involved shifting from brick-and-mortar sales to digital. Bartenders become delivery drivers as online stores streamline the process of clicking six-packs into carts. In many cases, businesses are luring customers with special releases. While Brian Beaucher, owner of Grand Rapids’ Craft Beer Cellar, offers his entire inventory online and for delivery, he’s also created a Quarantine Beer Box featuring 24 mystery Michigan beers with a focus on small, self-distributed breweries. It’s a friendly gesture during these uncertain times, especially since these local haunts have the most at stake.

“While I’d love more support, there are businesses struggling worse than us,” Beaucher said. “Purchase a gift card or support a GoFundMe for staff at your favorite bars that are completely closed during this pandemic.”

If you’re searching for a specific place to support, consider Rake Beer Project, a
Muskegon brewery that opened late last year. After the uphill battle that was opening his taproom, owner Josh Rake never imagined he’d have to close it so soon. In spite of the circumstances, he persists. “In the past few weeks, we have transitioned from a business that relies almost solely on in-house consumption to a brewery focused entirely on packaged beer releases.”

Fortunately, the team has found success selling out coveted brands like Purp Joose and the appropriately named Stay Inside triple IPA.

He’s not alone in this package pushing strategy. City Built Brewing Company has canned some killer new products during quarantine and Arvon Brewing Company, even greener to the scene than Rake, has also pivoted to weekly drops. Rake believes that in being smaller, he and his fellow brewers can be more nimble. “Obviously, we aren’t as financially stable as a 5- or 10-year-old brewery,” he said. “On the flipside, our size and newness mean that we have less financial pressure to continue making the same beer that we were making and selling prior to this.”

In other instances, the switch to social-distanced releases has fundamentally changed some annual events — not necessarily for the better. Every April, Perrin throws a barn burner for No Rules, its bourbon barrel-aged effigy to The Big Lebowski, fit with live music, a costume contest and other festivities. Senior Marketing Manager Lindsey VanDenBoom lamented but qualified the necessary move to forgo the party this year.

“While we hate to say it, we had to lay down some ‘rules’ this year for the 2020 No Rules release,” VanDenBoom said. “The No Rules event was canceled but our production team worked so hard to craft one of their favorite beers, we still planned to release it.” Fans still clamored for it in late April, but for a beer that feels meant to be shared, the missing social component stings.

Ultimately, the best way to show support is to show up. David Ringler, the owner and “director of happiness” at Cedar Springs Brewing Company, echoes that message when it comes to ordering takeout from our favorite breweries.

“We encourage everyone to support their local establishments directly, whenever they can,” Ringler said. “Not through gig services like UberEats or StubHub who take healthy fees from them.” Every penny counts and going the extra mile makes a difference.

Ringler, typically an ebullient personality, does have a dour — albeit reasonable — list of concerns: “How can we keep our guests and staff safe? How can we make sure our staff gets paid? How long will this last? How will we survive? Will guests come back after this is over? When will we see a pandemic shutdown again? Will our retail partners who pour our beer be able to survive?” Ringler has kept an open line of communication with his staff and guests via social media, but the answers to his questions aren’t clear yet. These are uncharted waters; our best efforts often feel thwarted come next day’s news.

Early on, Mike Stevens, co-founder and CEO of Founders Brewing Co., used his company’s stature to build a comprehensive support system for employees and beyond. “We have launched the #CraftedinMI campaign to leverage our social media presence to support local Michigan-based crafters who are unable to sell their work right now, and we’ve seen a number of success stories from this,” Stevens said.

Further still, Founders will partner with the Michigan Restaurant & Lodging Association on a program to support their relief effort for affected employees. They’re setting an example for what Michigan beer can do with its means.

“We will continue to uphold and augment our high safety and quality standards to ensure that consumers continue to receive the freshest and best tasting beer that they expect from us,” Stevens said.

There is something reassuring about cracking open a can of craft during these dark times. To ensure we can keep doing so, buy close by, as much as you can.

Tweet
Published in Microbrews
More in this category: « Mitten Brewing Gives Back in New 'Dough Nation' Sunny Cider Season »
Login to post comments
back to top