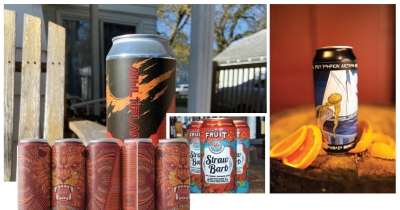 Ahh, nothing like a nice barleywine on a sweltering afternoon. Got some big bad stout warming up on the veranda too. Oh wait: That sounds worse than an IV of sunscreen? Do explain!

It’s really no secret. As drinkers, we adapt to the season, craving different styles depending on the weather. Brewers recognize this too, with seasonal releases catering to our moods. While it’s easy to reach for that Summer Shandy or macro lager, consider these local options when you need something fizzy to beat the heat.

We’ve all seen it: Dad puts down a couple of Huma Lupa Licious and then starts calling them Oompa Loompas. Very funny, Pops. To prevent early onset dad humor, Short’s shrank Huma to a manageable 4.5% while retaining the original’s hoppy, malty integrity. Currently, you can only find Lil’ Huma inside Short’s new Refreshin’ Session 12-pack, but odds are this mini IPA will get a solo debut once fans find out about it.

Michigan has plenty to be sorry for — brutal winters, the Flint Water Crisis, Kid Rock — but fruit is not one of those things. Come summer, we have produce up the wazoo; strawberries and rhubarb especially. This combo works well in pie and, unsurprisingly, it’s a great match for beer. With a blend of sour beer and freshly brewed fruit beer, Vivant’s Strawbarb is juicy as jam with a healthy amount of acidity. Keep your eyes peeled for
Unapologetic Fruit: Stone Fruit/Cherry this August.

When you're out on the green, soaking in the sun and traversing 18 holes, you need something to keep you going. That's where Swing Juice comes in, a perfectly crushable juicy IPA from Big Lake Brewing. Hopped with Citra and Amarillo, the IPA is incredibly drinkable thanks to heavy citrus flavors without much bitterness at all. Plus, it's 5.5% ABV, so you can knock back a few without danger of driving your golf cart into a water hazard. In fact, even if you don't golf, Swing Juice is for everyone who even kind of likes IPAs.

If 2019 was the year of the White Claw copycat, let 2020 be the year of the White Claw killer. Speciation has developed the secret formula with Launch Loop, a seltzer with cherry, lime, lemon and coriander. They’ve upgraded the seltzer game by incorporating whole fruit and Nordic Kveik yeast into concoctions that rival their sours in complexity. The team brewed 600 gallons of this batch but considering May’s seltzer — which featured apricots and Frederiksdal Stevnsbær Cherry Juice — sold out in days, you’ll want to get your mouse-clicking finger ready when this one drops online.

Calabaza Blanca, a sour biere blanche, always felt like it belonged at the beach, yet the 750 ML bottle was a bit prohibitive. After years of resistance, Jolly Pumpkin caved and put it in pack-ready cans. At 129 calories, this witbier won’t contribute to beach bloat, but it will delight the senses with wisps of orange peel and a tart, dry finish. Low-cal and farmhouse aren’t words I ever imagined together, but, well, here we are.

City Built has brought the lagerhaus love by way of Czech Republic to Grand Rapids. This crispy Pils is the ultimate schwag killer — gold as a tooth with a subtle spiciness from the Saaz hops. Quenching and uncomplicated, it’s the perfect gateway beer for those friends who can’t give up the Bud Light habit. Plus, they’ll feel mighty fierce holding this can emblazoned with the angriest lion I have ever seen. Buckle up for Leo season, baby.

Tweet
Published in Microbrews
More in this category: « Sunny Cider Season Apples to Apples: Ciders for Summer »
Login to post comments
back to top