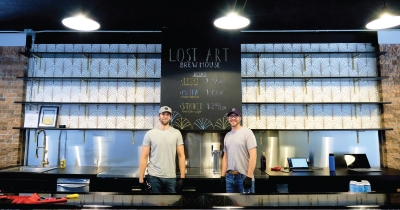 A brewery opening should be a magical thing, the manifestation of dreams fit with pints clanking, rosy folks smiling, laughing, glugging — the whole shebang.

Brad Lawrence and Mike Smith, co-owners of Lost Art Brewhouse, anticipated these golden moments when they hoped to open in early March. Then, a world subsumed by COVID-19 affirmed the proverb: Even the best laid plans of mice and men go awry. Contractors were put on hold, delaying the buildout, but the most obvious setback was the state-mandated shutdown of bars and restaurants. Hard to host your party when it’s against the law!

After waiting it out for a few months, restrictions loosened. Smith and Lawrence grew tired of sitting on their hands. The guys decided it was high time to show the people what they’d been up to. In July, Lost Art officially opened for takeout only, debuting a trio of flagship beers — MI IPA (Michigan-hopped IPA), Tricky (hazy IPA) and Striker (premium lager) — that quickly sold out of stock.

A sellout is impressive for any fledgling brewery. But under these circumstances perhaps it begs the question whether this hype represents a vacuum of quarantined beer geeks thirsty to try anything new. Lawrence bristles at the thought of considering this success a fluke — I do too. Lost Art’s beers are built to last.

“It’s very difficult not to be defined by what’s happening in the world right now. We had no intention of opening up in the middle of a pandemic,” Lawrence said. “We envisioned these opening weeks going a lot differently. Part of the joy in creating beer is getting to watch people enjoy it, talking about those beers and having a sense of community together.”

While it is unfortunate having to forgo fresh draft pints for now, Lost Art had always intended on leaning into the to-go model. With many breweries shifting their strategies to on-premise can releases, Lost Art following suit is a savvy move predicated on the fact more and more people are bringing the brewery experience to their own backyards, especially when it isn’t 100% safe to visit a taproom.

“I think COVID has kind of trained people to do more curbside and helped that learning curve when it comes to to-go beer,” Smith said.

It’s true, curbside drops from Arvon Brewing, City Built, and Speciation have been blessings during this strange time, and we’re thrilled to have Lost Art join that rotation. But what good is a brewery without good beer? Let’s talk about the liquid!

There’s a simplicity to Lost Art’s initial offerings that differentiates their lineup from the whacked-out, adjunct-heavy experiments some breweries are staking their business on. There are no Oreo-salted-caramel-marshmallow stouts to be found here. By paying respect to the integrity of ingredients, Lost Art finds the backdoor to flavors, manipulating malt and hops to present flavors without shortcuts. And in paring back, they’re proving the importance of nailing the basics before branching out into extremes.

“We really wanted to refine our style down to beer in its purest form and go from there as far as creating new and innovative flavors without adulterants,” Lawrence said.

Nowhere is this creed more clear than with MI IPA, an American IPA that features a shoal of Michigan hops grown close by at Pure Mitten Hops in Coopersville. The region-specific hops like Mackinac and MI Copper create a flavor profile unique to our state. The brewing community usually applies the term “terroir” to beers inoculated with wild yeast, but taste of place can just as easily reveal itself in hop character.

“You can probably go anywhere in America and get a beer with Citra or Mosaic hops, and it’s gonna taste similar in Chicago, Texas, New York,” Smith said. “We want to give people different flavor experiences than what they’re used to.”

Tricky — Lost Art’s stamp on the hazy IPA — is an example of said divergence from the pack, with dry, herbal notes instead of those rote citrus flavors we’ve come to expect. Still, the mouthfeel is extra fluffy and the appearance opaque but not swampy. “We don’t chase the murky pond water look, we go for glow in the glass,” Lawrence said. Look for more lagers like Striker to crop up, too: a push for balanced, approachable beers you can drink more than one of.

Kicking it back with a couple of cold ones has been critical to Smith and Lawrence’s friendship, forged through more than a dozen years of homebrewing and exploring the nation’s scenes to absorb a proper beer education. Both grew up less than a mile away from the taproom, establishing roots in an area that’s excited to have them bring growth to the community. They’ve been grateful for the warm welcome and are eager to return the hospitality once the pandemic dies down.

“When you can come in here, you can truly enjoy yourself,” Lawrence said.

“We don’t want your visit to our establishment to be marred by worry.”

When that right time comes, expect a barnbuster. Until then, keep your eyes peeled for any and every release — these guys have most definitely discovered the Lost Art of brewing things right.

Order beer for pickup at lostartbrewhouse.com

Tweet
Published in Microbrews
More in this category: « Apples to Apples: Ciders for Summer Magical Mysterious Mead »
Login to post comments
back to top