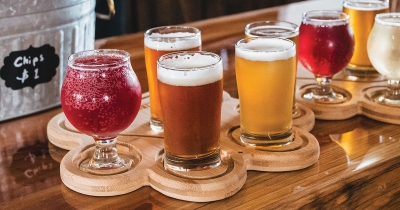 Mead often feels shrouded in myth and intrigue. Historians consider it the world’s oldest alcoholic drink, likely enjoyed by such royalty as Cleopatra and Alexander the Great. The Norse certainly loved it, bearing to mind the image of Beowulf types clanking pewter mugs after slaughtering some village beast. Mead is potent, with the power to imbue virility, wit and strength. It must possess a little magic, no?

In actuality, mead is a simple beverage — mix honey, water, and yeast in a bucket, add time, and blammo! You’ve got yourself some fermented nectar. That said, the path to getting there isn’t always so cut and dried. Our state’s best producers have proven that sourcing local, oak aging, and experimenting with tradition results in a complex beverage worthy of the gods, or any ol’ gump with a sweet tooth.

While Michigan’s east side has long ruled the roost with mead powerhouses Schramm’s and B. Nektar, we’re showing our prowess over here too. As fall approaches, mead’s flavor profile fits the season, so fill your cup with stuff from these meadmakers.

Allow me to unspool a tale of the lovers Grimsby, two star-crossed meadmakers with a penchant for honey whose destiny brought them to ... Middleville? While perhaps not the most obvious spot to plop a meadery, Grimsby Hollow has been so successful, it’s hard for co-owners Mandy and David to keep up with demand. They’ve earned this devoted following with meads that are adventurous, inventive, and packed with Michigan fruit and honey.

For newbies, the oak-aged traditional mead The Beekeeper is a great entry point. Each sip pulls the pin of a honey grenade. It leaves a film of sweetness on the lips like a French kiss with a queen bee. The oak aging imparts wisps of vanilla and char. It’s really special.

From there, branch out with concoctions like When Ravens Dream, a red and black currant, chocolate, and vanilla mead that reads like Neapolitan ice cream and tastes like it too. The Grimsbys never claimed to be subtle, but their meads confirm that’s all for the better: Big flavors leave big impressions.

The newest meadery on the block, Adesanya opened just last month to rave reviews for its honey wine that comes in all shapes and sizes. From boozy melomels — mead fermented with fruit — like Make Me A Believer to session draught meads like the lightly carbonated Shiftless When Idle, with vanilla and passionfruit, Adesanya demonstrates versatility in spades.

Instead of fairytale vibes, Adesanya’s taproom opts for décor more modern and spare, with light wood and an open floor plan that screams mid-century hive. Owner David Sawyer powered through a pandemic to get here, and the blood, sweat, and mead clearly paid off. The level of quality out the gate excites for what’s to come. Expect cyser, cider, beer and food as they get settled in their location.

Keep your eyes peeled for openings in Adesanya’s membership program, which grants you exclusive access to one-off experiments that may include cognac-barrel-aged mead or chocolate-covered cherry braggot.

Arktos might sound like the name for the Greek god of mead, but truthfully, it just means bear. I guess it’s fitting: I think we all know a Pooh with a taste for honey.

Since 2014, Grand Rapids’ one and only meadery has scooped up awards left and right — including a handful of Best of the West wins! — for its meads inspired by ancient recipes and millennia-old techniques. Yes, the flagship Queen Bee with Michigan Wildflower honey is outstanding, but best in show goes to Cricket Song, a coffee metheglin — mead with flavor added — that squeezes perfectly between the Venn diagram of upper and downer.

We’ve been waiting with bated breath for their Bridge Street tasting room to open, and now it seems we’re closer than ever to toasting honey wine in the new mead hall. With communal tables, dangling animal pelts and a hearthstone fireplace, the new space will surely transport us away from the dumpster fire that is our current reality.

WHERE TO STOCK UP ON MORE MEAD:

Tweet
Published in Microbrews
More in this category: « Arts and Craft Beer New School »
Login to post comments
back to top